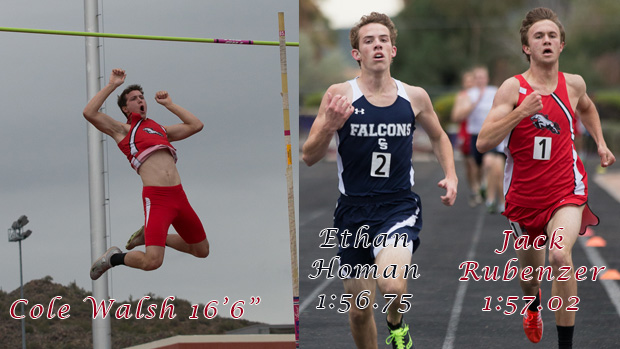 Two weeks into the 2013 track and field season Arizona is looking have some top marks on the US leader board.

Brophy Prep Pole Vaulter, Cole Walsh, jumped up to US#3 at the Rattler Invitational on Saturday.  His 16-6 jump puts him right behind US#2 Scott Marshall from Desert Vista who jumped 16-9 at the Aztec Invitational a week ago.


Just back from his Brooks PR 2 mile win, Bernie Montoya (Sr., Cibola) came into the meet with a little different goal in mind.  Montoya planned to run an easy 62 - 64 second laps in the 1600 and that is exactly what he did finishing in 5:15.71 - beating his meet record from 2012 by .2 seconds.  Montoya later ran the anchor on the 4x800 relay team taking the baton in 6th place and finishing in 2nd place behind Hamilton.  The Hamilton boys won the event in 8:18.86 with Jonas Maag, Justin Westbrook, Sean Mulligan and Nick Falcon. 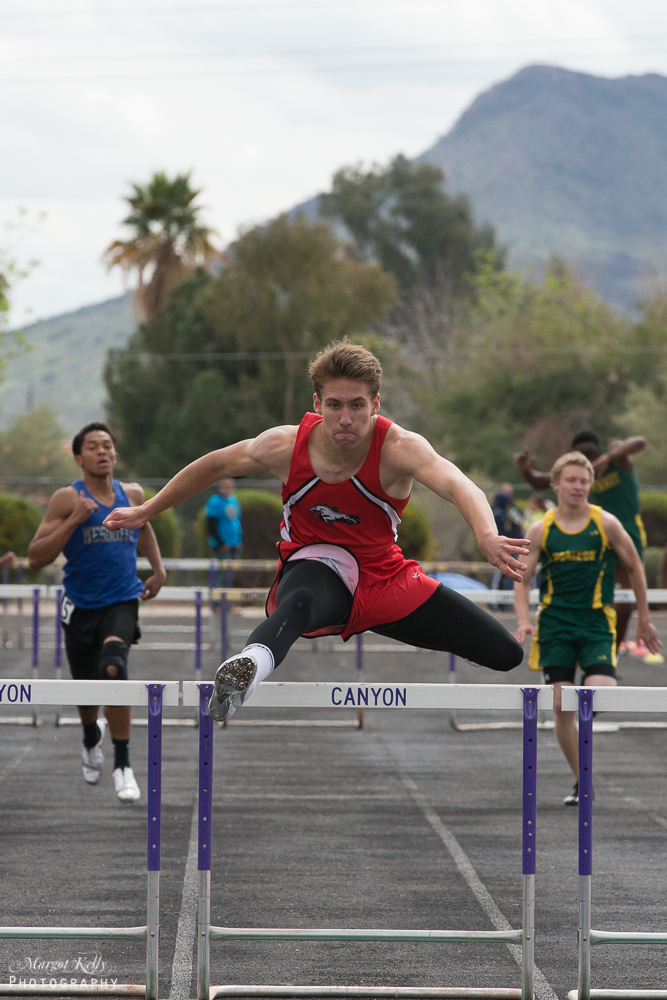 The cold weather on Saturday made it a little difficult for the sprinters and hurdlers to warm up and a few sprinters had some hamstring issues during the prelims and finals.  Hurdler favorite, Robert Grant (Jr., Brophy, photo right), clipped 2 hurdles before falling over a 3rd in the 100 hurdles and quickly bounced up to finish the race but failed to qualify for the finals.  Grant came back in the 300 hurdles to win the event in 39.29 over Brandon Jamison (Fr., Chaparral) in 39.79.

The race of the day had to be the boys 800 meter run with the top 2 seeds, Ethan Homan (Sr., Cactus Shadows) and Jack Rubenzer (Sr., Brophy), battling from start to finish.  At the 400 meter mark Rubenzer and Homan were shoulder to shoulder with a tight group behind them.  As the pack passed the 300 curve Rubenzer made a move to distance himself from Homan but Homan fought back at the 200 mark and with 50 meters to go the two were side by side again.  Homan surged just before the finish for the win in 1:56.75 with Rubenzer taking 2nd in 1:57.02. 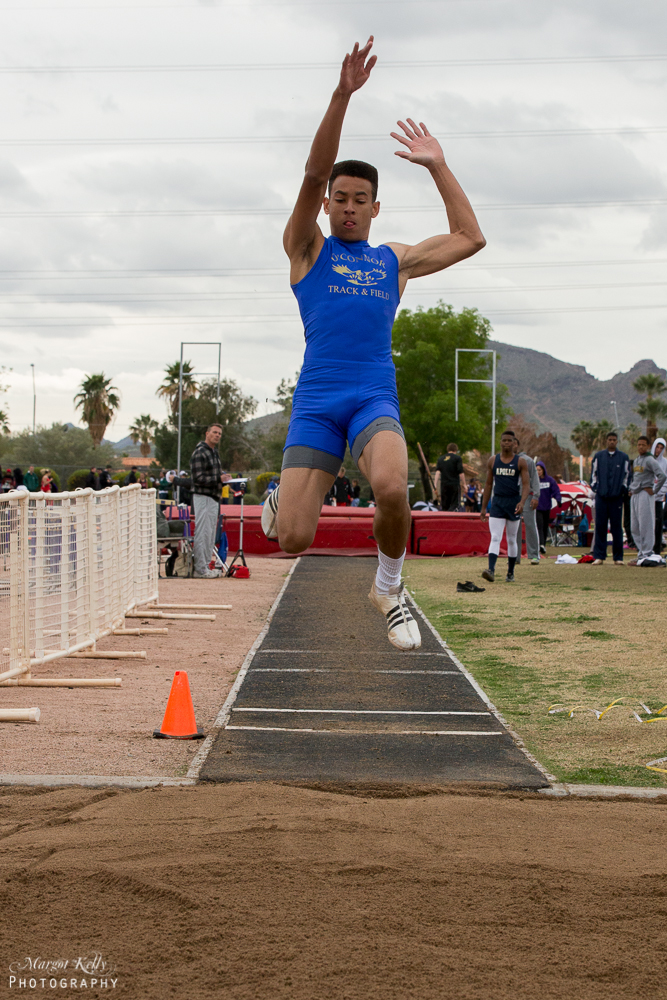 Hayden McClain (Sr., O'Connor, photo left) set a new meet record in both the long jump and the triple jump.  McClain jumped 22-6.5 in the long jump and 46-08.00 in the triple jump.  McClain was also part of the winning 4x100 meter relay team.  Also running for O'Connor were Dionee Marrero, Marcus Setoki and Chris Pyle.  Together the team ran a 42.18 and broke their own 2012 meet record of 42.43.

North Canyon girls won the 4x100 meter relay with a time of 50.89.  Running for the team were Kaela McKee, Arionna Jones, Sara Bleach and Jasmine Stauffacher-Gray.

Bethany Krasuski (Sr., O'Connor) jumped 10-6 in the pole vault for the win.