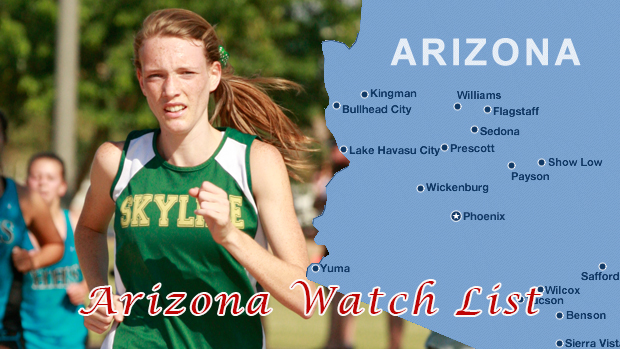 We are beginning our 2013 Cross Country Arizona Watch List series and will continue with it for the next few weeks.   As the season gets underway new athletes will be added to the list.  Good luck to everyone!  See you on the course!

What are your goals for the upcoming season:

How is your summer training going?   Your favorite workout?  What kind of summer mileage do you run?

Summer training has been going great! I have become a lot stronger this summer and expect great things through out the season. We have a couple new coaches under our belt now, so they have been trying many different new strategies of training. Thus far my favorite work outs have been when we went up to Payson and ran altitude and hills. Summer running began at the beginning of June and I have ran about 40 to 50 miles a week as well as lifted twice a week.

How long have you been running and how did you get started:

This will be my fifth year of running. In seventh grade my friend begged me to join the modified track team with her, and at first I wanted nothing to do with it. After the track season running became a significant part of my life.

Which meets will you be running this year?

This year our team will be starting out with the Peaks Invite up in Flagstaff. After that we will heading to Wherley, Conley, Twilight, and the Rattler Invites. Ending the season with our City Meet at Red Mountain Park and Sectionals at Crossroads Park; where hopefully our girls team will head to State as a team!

What are your favorite and toughest courses to run in State and out of State?

Last year was my first year of cross country here, because I moved from New York. So, I did not get the chance to run a ton of courses yet, but State and Twilight were really fun courses. I enjoyed the hills at State, because unlike most people I tend to like hilly courses and Twilight’s atmosphere at night was fun and exciting! Toughest course I have seen here would probably be Peaks, because you have the elevation and hills.

In eighth grade me and my best friend both made it to State in New York and we finished the sectionals race one second behind one another!

What do you look forward to the most this season?

Getting to see how our team does as a whole, and just embracing and taking advantage of my last high school cross country season. I also look forward to working with all the new girls, because they are going to bring a lot to the team.

Out of all your running accomplishments so far, which stands out the most?

Placing 4th at state in the 800m this past track season.

When you are not running what do you like to do?

I love spending time with friends and family! Staying active swimming and hiking is always fun as well.

I lift every week and bike/swim occasionally.

How have your coaches influenced you overall?

My first coach from New York really got me into running and enjoying it. After I came here Coach Worm got me into the state of mind of wanting to go farther with running such as Olympic trials. My two new coaches, Coach Williams and Coach Roelofs have really built the idea of being tough and never giving up into me. Not only have they taught me to work hard at practice but in general life as well.

Are you considering running after college?

Yes! I plan on running the rest of my life, and I hope a few years of professional running along the way. I would also love to do a bunch of marathons through out my lifetime.

Big shout out to all my coaches along the way for always pushing me and being there for me through it all! My parents for all the early morning rides, support at meets, and I always putting up with me when I had a bad race! My best friend Kelly Bochnewetch living in New York, lets make our last season a great one! Jessie Williams, thanks for always pushing me at practice and I am so glad I get to run with you my senior year!

Night before I love pasta and right before chocolate chip coconut Cliff bar.

Kind of shoes you train in?

What time of day do you run?

After school or early in the morning.

“The task ahead of you is never as great as the power within you.”   Ralph Emerson