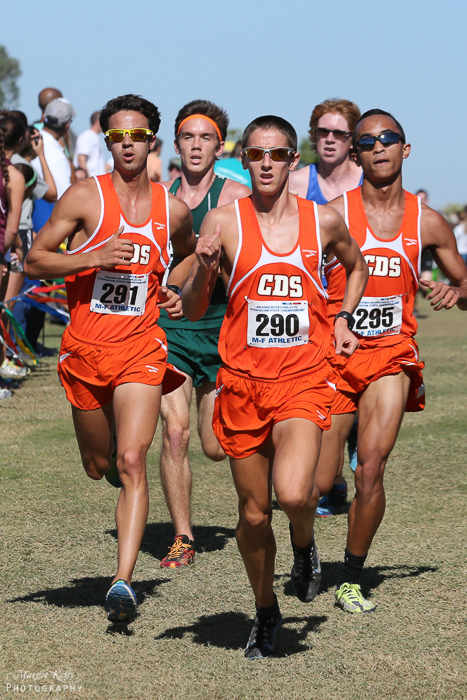 Tired of missing a trip to the podium year after year, the Corona del Sol boys decided "This was their year" winning the AZ State Title with 48 points over Desert Vista's 80 points.

"Something like this has been a long time coming.  We feel a kind of pride in being able to avenge past teams (who) have gotten runner up by just a mere amount of points just because certain things happen on the day of - little sicknesses here and there," said State Champion Nathan Rodriguez (photo left on left).  "It feels really good to bring this home for those guys too."

"I wanted to take it out with the leaders," said Normand.  "I stayed up there and they (Rodriguez and Wheeler) made their way up by the first mile."

The five runners hit the mile mark at a 5 minute pace and stayed together for most of the race.

With 800 to go Normand had a slight lead followed by Rodriguez, Wheeler, Dale and Day.

"I was Kind of sitting back seeing how the race goes," said Rodriquez. "I didn't pass Ryan until about 250 meters to go.  He was making me work."

"We've been working together for a long time," said Normand about the team.  "We have a couple new additions and the've also been amazing so I am really proud of these guys.  They've all put in the work - they did great."

Wheeler finished 3rd in the race with a time of 15:36.68.  "We wanted to get top 3 - I was able to hold off 2 pretty good rivals," said Wheeler about Dale and Day. "The team did great.  I really like our our back 4 worked and scored enough points to beat DV." 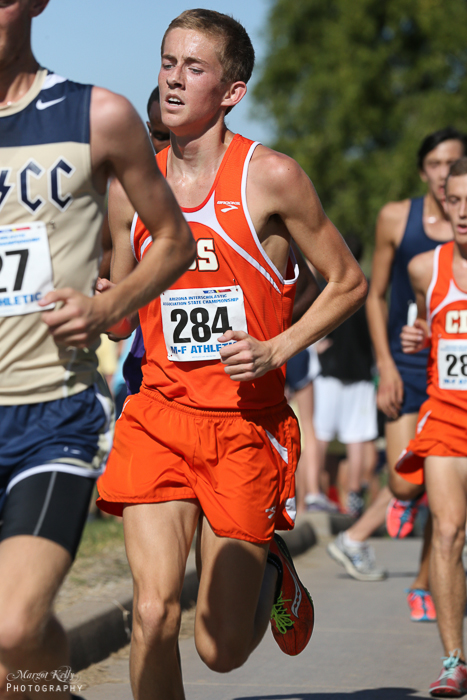 Patrick Cullings (photo right) was the next Corona runner to cross the finish line - landing in 20th place with a time of 16:34.53.

"We wanted to really keep our streak going and obviously win state," said Cullings.  "I took it out a little bit faster I guess the first half and went with DV because we knew that they were out competition.  We were trying to break that (DV) up."

Although Desert Vista looked strong and placed all 5 of their scoring runners in the top 23 - it wasn't enough to overtake Corona.

"It's unbelievable - I can't even describe it," said Fischer about the win.  "We were just trying to go out and run it like every other race - nice and hard."

"It's awesome just working with a great group of guys," said freshman Slade Sumners.  "As a freshman it's great to look up to these seniors."

The last time Corona won a State Championship was in 1992 when Rodriguez's Dad, Ari, was on the team.