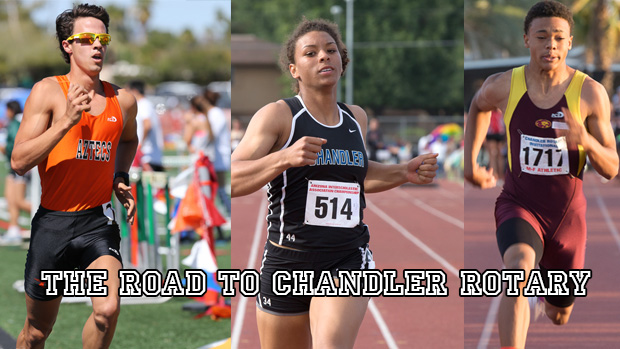 Since the last posting on the field event previews, several teams have been added.  Liberty, of Henderson, NV, Bishop Gorman, Las Vegas, and Serra of Gardena are three schools having athletes that will make their presence known Saturday evening.

Liberty has one of the top female throwers in the nation in Ashlee Blake. So far this year she has thrown the indoor shot put over 52’.  The Liberty boys bring Reno Tuufuli -  a 178’ discus thrower.

Bishop Gorman, brings the high jumping Cunningham siblings.  Last year Randall was ranked first in the nation with a jump of 7’ 3” while his younger sister brings the nations’ 3rd best mark of 6’ 0 ¼”.

Serra, the boys state champions in California last year, has two noteworthy field event athletes to keep an eye on.  Adoree Jackson, a 25’ long jumper and Jeremy Franklin who threw the discus 175’ last year.  Right now that gives the boys field five throwers who are 170’ or better.

This week we look at the distance field.  Traditionally the 1600/Mile is the premier event.  The event is sponsored by Arizona Milesplit and the girls race is still named in memory of the late great distance runner; Sally Meyerhof.

The depth of the boys field is quite evident as several athletes are coming into the meet with a 4:24 or better.  The top runners to watch will be one of the premier distance runners in the country, in Cerake Geberkidane from Denver East High School.  The Oklahoma State bound Cerake ran a limited amount of track in 2012 and is back on the track after sitting out 2013; playing mostly club soccer.  The other top runner to watch is Corona del Sol standout, Nate Rodriguez who has already run a 4:14 this season.  Other solid runners who should challenge the 4:17 mark will be a trio of runners from Las Vegas Centennial HS: Jackson Carter, Dajour Braxton, and George Espino.  From California HS in Whittier there is Jose Pacheco and Matlazomatli Rojas.  From Arizona; Nick Dale of Mountain Ridge and Josh Hoskinson from Arizona Lutheran.  All running better than 4:22 last season.

Depending on what they double back on, some other 800 runners that could force a fast pace of 1:55 or better are Branden Randell from E. Roosevelt HS, Martin Ponce, Liberty NV, Cade Burk, Perry HS, Diego Diaz, Del Valle, TX, Travis Okie, Sedona Red Rock, and Nick Creasman of Corona del Sol.

With entries due within the next 24 hours, the match ups or the failed match ups start to become apparent. This is a crazy time of the year for track and field in the west.  Arizona has been going at it now for three weeks with nice weather (except for those unusul extreme high wind at the Husky Invite Saturday).  Colorado teams (there are 12 of them) have been shoveling snow this weekend, and will now come down to 80 degree weather for their first outdoor competition. Meanwhile, the three El Paso schools are only two weeks away from their first round of state; their district meets.

Even with some marquee match ups now in the tank, the amount of quality sprinters and athletes have never been matched in prior Rotary Track Meets.  Fifteen meet records are in jeopardy of falling this upcoming weekend.

The 200 seems to be a deeper event than the 100.  Brophy’s Bobby Grant, will compete in the 200, after a double in the hurdles.  Others to watch for will be Serra’s Ronnie Hall and Poly’s Malik Dennis.

Hurdles:  The 300 hurdles return six of the top finalists from last year.  Bobby Grant will take his first serious attempt at the state record. He could be pushed by Deer Valley’s Anthony Phelps, teammate Isaiah Oliver, Hamilton’s Elijah Williams and Poly’s Juan Ward.

Short Sprints:  It looks like the matchup between Poly’s Arianna Washington and Chandler’s Ky Westbrook will probably have to wait till April’s Arcadia meet, as Washington is not entered with the rest of her teammates right now.  Shayna Yon of Cherokee Trail moves into the top challenger role in the 100.  The 200 however, looks to have a stacked field, as 11 girls are coming into Rotary having run times in the 23’s or 24s.  Jasmine Stauffacher-Gray (24.8, North Canyon), Frosh Kaelin Roberts of Poly(24.2), Tiana Bonds of Centennial (24.7), Jade Lewis of Poly (24.4) and E. Roosevelt’s Taisyn Crutchfield join Ky Westbrook (24.3) of Chandler in a very fast and crowded field.

Hurdles:  Arizona fans are in for a treat, as they will get to watch, new American Indoor 60 Hurdle record holder Dior Hall compete in his first outdoor competition of the season. Since Colorado’s state meet isn’t untill mid-May, this could be her only competition till April.  Dior ran 13.11 as a freshman, and has slowed down since then, running a 13.44 last season.  This is the fastest field that I can ever recall in Arizona, with six athletes coming in who have all broken 14 seconds.  Kymber Payne (Poly 13.8) Tiana Bonds (Centennial 13.90), Jasmyne Graham (E.Roosevelt 13.89) Ebony Crear (Poly, 13.95), and Ashlee Moore (Hamilton 13.98).  The 300’s could be quite a match up between last years nationally ranked hurdlers, Kymber Payne and Tianna Bond, both running in the mid 41’s last season.

Saturday evening, Chandler Rotary will have as a guest, world record and gold medal winner, Aries Merritt in attendance.