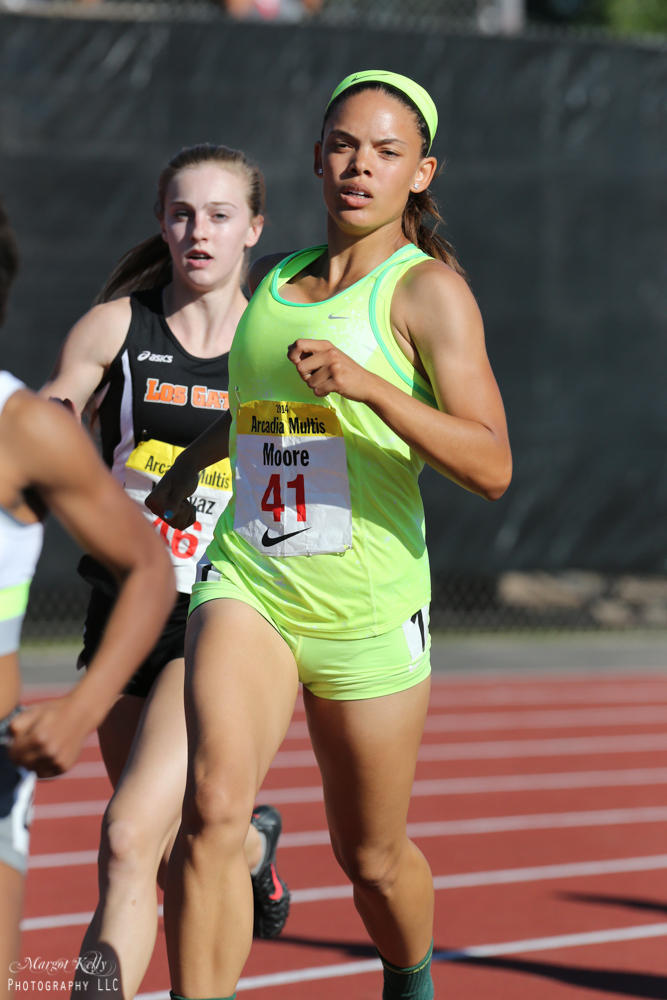 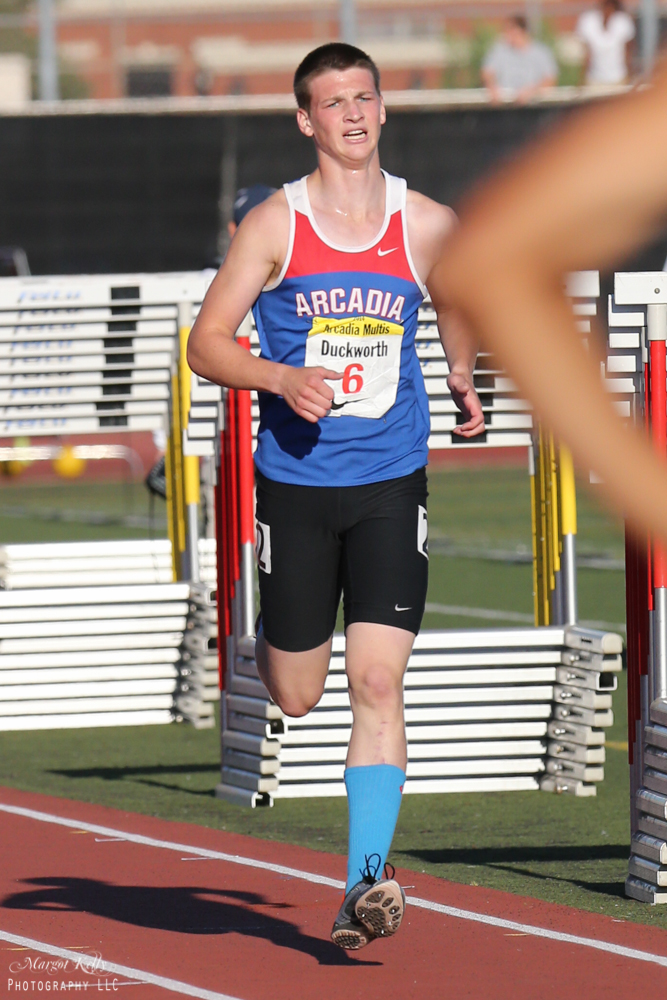 The Arcadia experience started with the multi events and a close race to the podium between Ashlee Moore (Sr., Hamilton - photo right) and Tiana Bonds (Sr., Centenial, NV).
“I didn’t do as well in the high jump,” said Moore after the race.  “But I did really well in the Javelin.”
In fact, Moore had a PR in the Javelin of more than 7 feet putting her in 1st place before the final event – the 800 meter run – an event  in which she needed to finish within 14 seconds of  Bonds.
She finished within 7 seconds with a final score of 5048 at US#1.   Bonds finished 2nd with 4999.
Moore finished 2nd in the 100 hurdles, 4th in the high jump, 4th in the shot put, 2nd in the 200 dash, 3rd in the long jump, 2nd in the javelin and 10th in the 800.
Sydney Madrid (Sr., Marana) finished 14th in the Heptathlon and Driana Mustin (So., Cactus) finished 18th.  Mustin won the 800 in 2:18.76.
Timothy Duckworth (Sr., Arcadia - photo left) finished 2nd in the boys Decathlon with 7122 points behind Harrison Williams (7525).
Duckworth’s strength is in the jumps as he won the high jump, long jump and pole vault.  He also finished 3rd  in the discus, 3rd in the javelin and 6th in the 110 hurdles.

As the Friday night relays began Brophy College Prep was getting ready for the 4x110 shuttle hurdle relay against  a group of very fast hurdlers including top ranked Union Catholic from New Jersey.
Freshman Robert Brooks led the team and handed off to junior Isaiah Oliver who handed off to freshman Samir Rahman.  The team stayed within 1-2 seconds of Union Catholic and as senior Robert Grant started his leg he was just behind the leader but was able to pull off the win by edging Union Catholic 1:00.43 to 1:00.70.
“We came in here and hadn’t really done a lot of practice but we were excited,” said Grant after the race.   “We have two freshman in this race – Samir ran a great leg, Robert ran a great leg and Isaiah……well Isaiah always runs a great leg.  The freshman are going to be “beast” when they are seniors.”
Brophy has a history at Arcadia and although they are not always ranked at the top when they come in to the meet – others know they are the team to beat.
“This is our third time winning in a row,” said an elated Oliver.   “Last two years we’ve won it and we’ve had great hurdle crews.  This year we wanted to come out and do it for the 3rd time.”
For Robert Brooks  it’s about hard work and respect.
“We practice with these guys every day and we know what it takes to come out here and put in some work,” said Brooks.  “ We know we are freshman but we wanted to do our best and give our team 100 percent.”
And they certainly did.
Rahman ran the 3rd leg and was trying to put Grant in the best possible position.   (Photo below - Rahman racing Union Catholic) 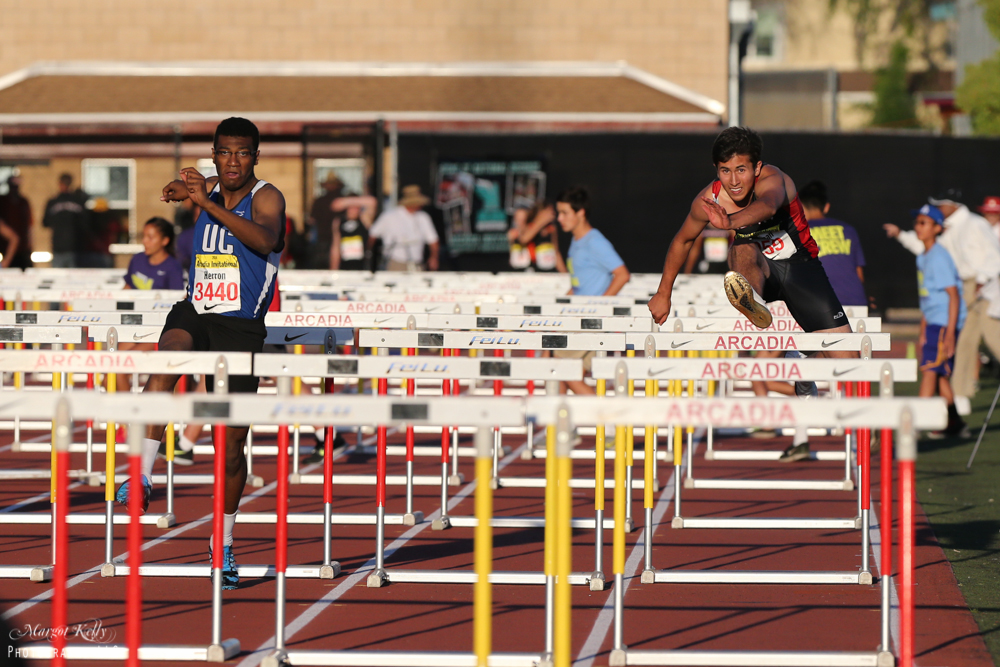 “My coach always tells me not to focus on the person next to me so I was just running my race,” said Rahman.  “We come to practice every day and we have these 2 boys as role models,” he added.
Where does their success come from?
Oliver credits a lot of their success to their former coach Tim O’Neil (now at Mt. Pointe) and to their parents who have stepped in.
“My dad, who was a world class decathlete (all time #2 at Oregon), came in and helped out.”
Robert Grant’s dad, also a World Class hurdler, also helped them out and even offered to step in for any of the boys if needed.  ( I think I need to see this)!
And Robert Brooks dad, who played football for the Green Bay Packers, also ran hurdles for South Carolina and joined in with the other dad’s to help out.
Brophy’s time puts them at #4 on the Arcadia All Time list.   The Brophy team from 2013 ran a 1:01.18 to make it to #8 All Time and in 2007 the Brophy team ran a 59.28 for the #1 Arcadia All Time spot. 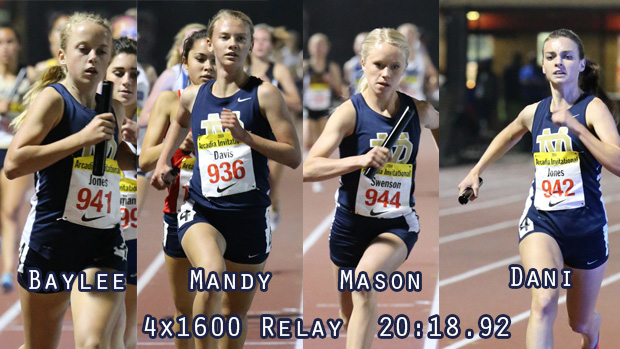 A little more than an hour later the ladies of Desert Vista stepped onto the track to run the 4x1600 Meter Invitational Relay with 2 freshmen, a sophomore and a junior.
Freshman Baylee Jones led the team with a 5:06.19 first leg putting the team in  a close 3rd place behind Serrano (5:04.19) Saugus (5:07.24) but Great Oak’s fastest runner ran the 2nd leg (4:57) and built a strong lead for their team.
Freshman Amanda Davis (2nd leg) and sophomore Mason Swenson (3rd leg) both sprinted the final 100 meters of their leg to keep the team within 1 second of 2nd place.
When Dani Jones got the baton she was 12 seconds behind the leader – Great Oak,  and tied for 2nd  with Saugus.
The lead for 2nd went back and forth throughout the final leg, between Jones and Sabrina Janes, but the photo finish at the end gave the win to Saugus.
The two girls finished 6 seconds behind Great Oak (20.12.79) with Saugus finishing 2nd in 20:18.84 and Desert Vista finishing 3rd in 20:18.92.
For their first time running the 4x1600 at Arcadia (and as a team) Desert Vista made their mark putting them at US#3 and 4th on the Arcadia All Time List.
And they ALL return next year! 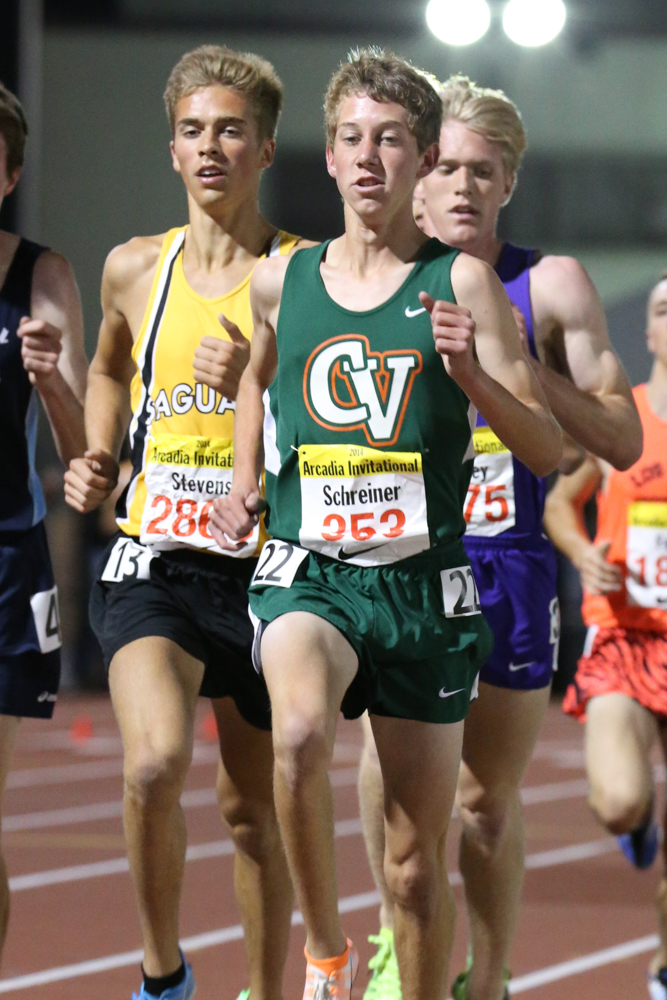 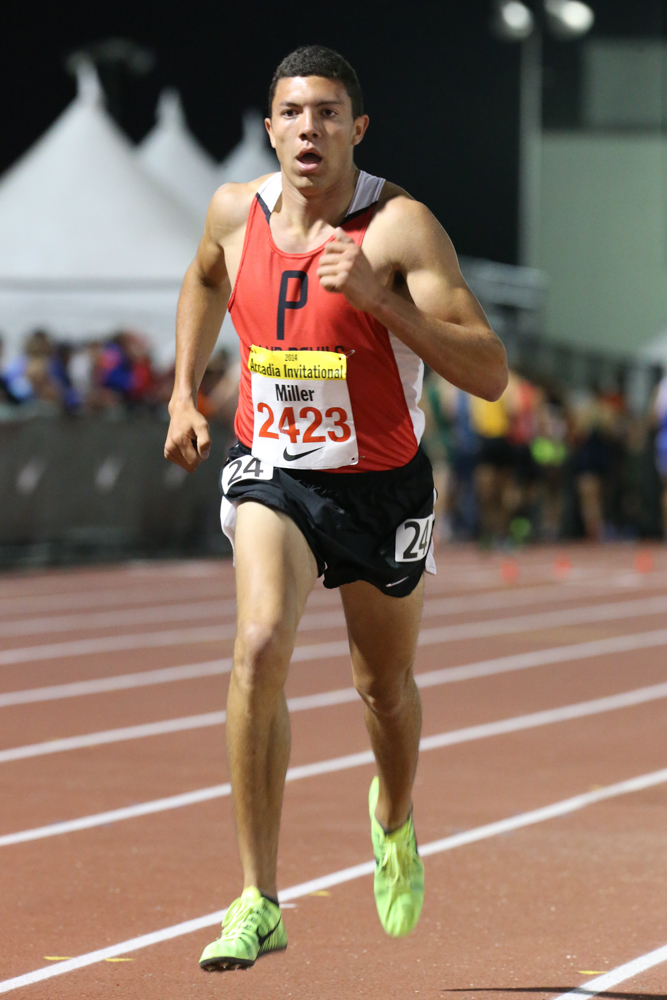 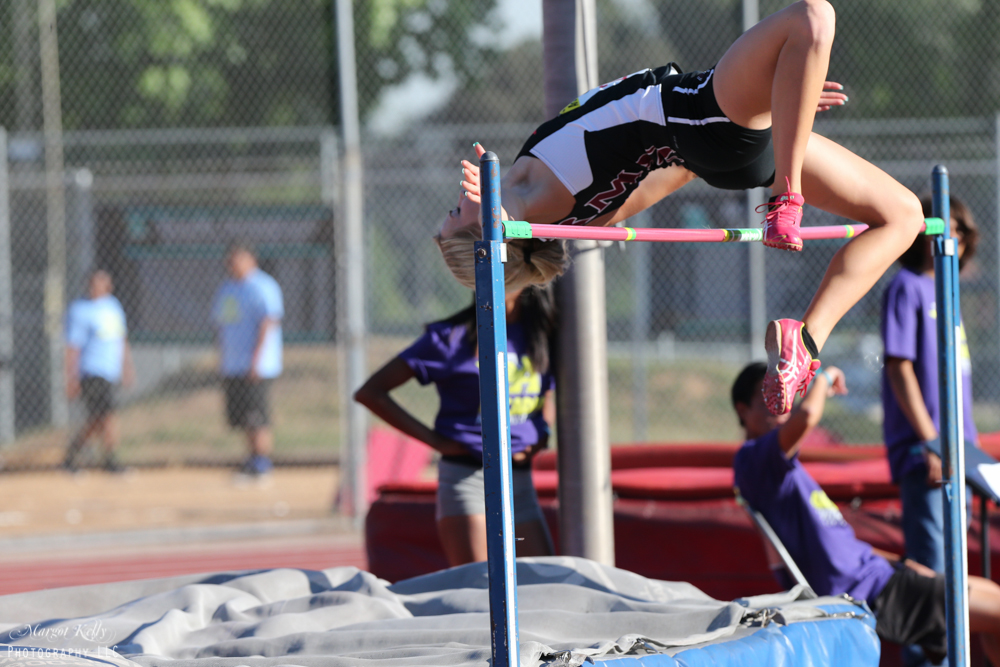 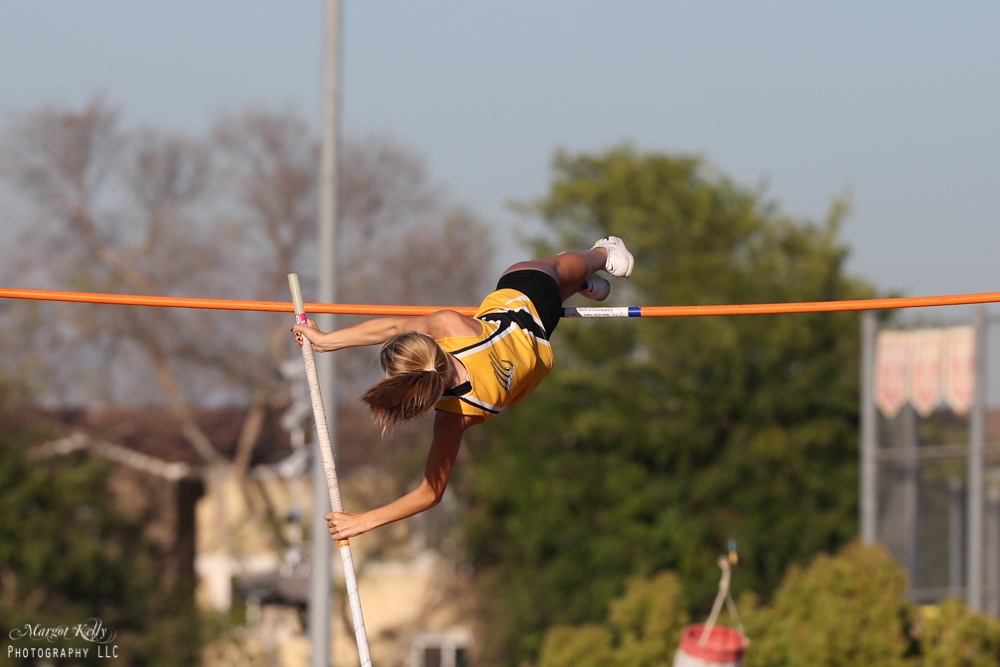 Colin Freeland (Jr., Corona del Sol) finished 3rd in the high jump with a jump of 6-3. 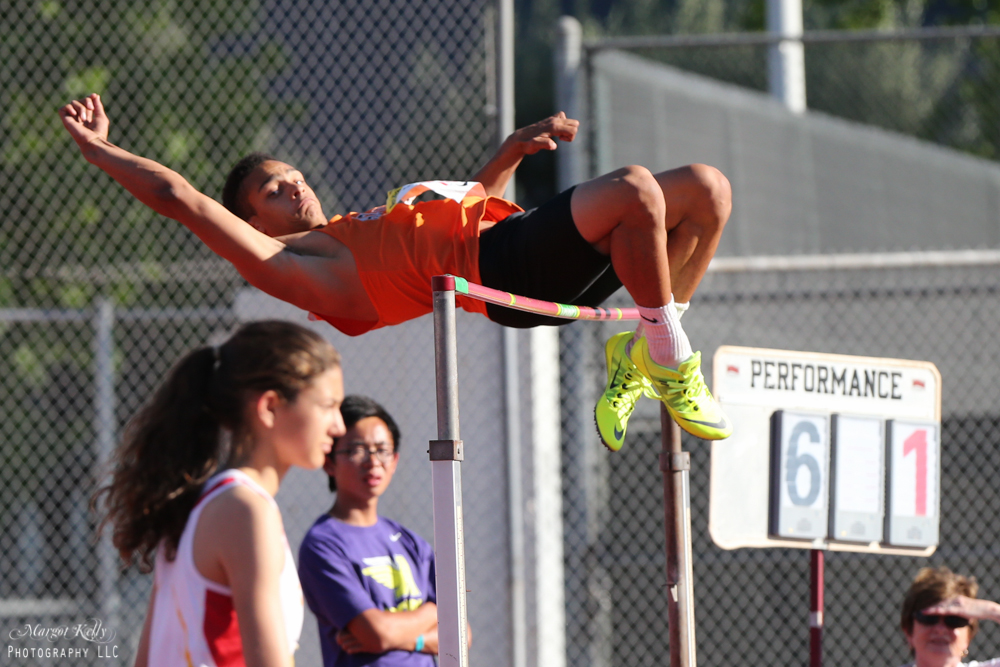