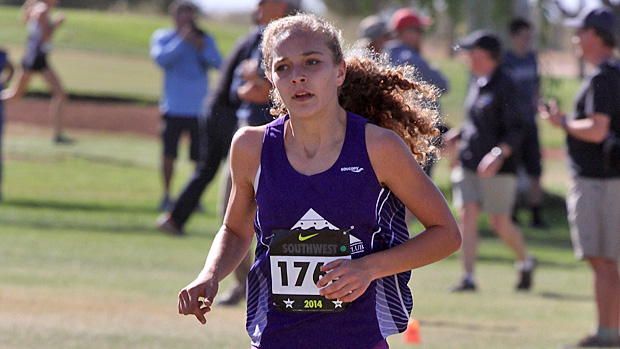 Successes are sweet, but sometimes even more so when they are unexpected.

One could feel a sense of dejection around the Desert Vista team camp after the girl’s championship race. Senior and team leader Dani Jones explained, “We came into the meet with heavy legs. I just knew I had to do it for the team.” There were five strong teams vying for the two automatic bids to NXN on December 6th in Portland. Each team knew there was little room for error, and a bad day might mean an early end to their season. Usually after a race that did not meet expectations all hope would be lost.

Coach Jeff Messer took accountability for the gloomy anxiety, “The girls ran tough, but it’s on me. I didn’t have them well enough prepared. When your whole team doesn’t run as well as you expect that comes down to one person and one person only. That is the coach, it was my fault.” Little did they know at the time they had finished 2nd to American Fork HS out of Utah.

“As a team we didn’t run as strong as we wanted to. Going to the awards ceremony was stressful; waiting to hear the teams and not knowing if we made it. When we heard we made it we lost it,” happily recalled Baylee Jones, younger sister of Dani and the 19th place finisher in the championship race. Finishing just 4 points shy of American Fork, Desert Vista’s 122 points gave them a comfortable margin over third place Davis HS (Utah) who had a score of 145. 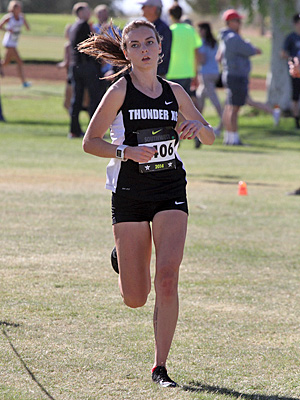 Despite the faster course Dani was only able to match her time of 17:26 from the Arizona state cross country meet with her fourth place finish. “It was one of those days I knew from the first step it might not be the day,” she recounted, but is looking forward to running at NXN. “I have been training for Portland. I’m going to brush it off and not let it affect me. Oregon is the place to do it. I am happy that my team will be there as well.”

Going into the race Dani (photo, right, by Alan Versaw) planned to take it with 600m to go. When the race unfolded and she realized she didn’t have it, she was worried.  Being the first runner, she knew her performance might determine if the team made it to nationals or not. That helped her hold on. With 400m to go the pace heated up as Coloradans Katie Rainsberger and Lauren Gregory were kicking it in. Dani knew she could not give up. “I was just trying to hold on at that point. I gave it all I had. Today was a big disappointment, but I think it says good things for Portland for both me and the team.”

Also with bright hopes for Portland is fellow Arizonan Allie Schadler. Bringing her A-game, she was able to get by in-state rival Dani Jones for the first time. Trailing only Rainsburger and Gregory, the harrier from Rio Rico HS was able to come in third, stamping her trip to NXN. Before the race Coach Steve Schadler, also Allie’s father, told her she belonged up with the lead runners. They were hoping for something between 3rd and 10th place. “I was impressed with her poise” he recounted, “at a mile she was 12th, but she was at the back of the pack. At the two mile mark it had gotten to about 6 and she was still there and moving up to the front of that pack.”

Allie recounted that the pack started to break up about a mile and a half into the race. “I was in the back of the pack. My coach always tells me I have to cover the move, so I covered. I got back with the pack, because if I didn’t I knew I would not have been in a good place. From there I started picking people off.” She certainly picked off some big names, getting by pre-race favorites like Dani and Lucy Biles from Utah. “I wasn’t expecting to stay with those type of top girls” said Allie. “I was just running my race. I turned the corner and I passed by Dani. I wasn’t expecting to, but my goal was to be up with the leaders.” When they came onto the soccer fields it was like she had blinders on. Giving it her all, she just did not want to get caught from behind at that point. No one was close to catching her as she crossed the line in a personal best time of 17:23.

With the automatic bids, the Desert Vista ladies team and Schalder will have two more weeks of training left to do before an all-expense paid trip to NXN where they will compete for the title of national champion. Dani and Bailey Jones are excited to have the extra time to train, even on Thanksgiving. “We run on thanksgiving” explained Dani, “Our family is from Indiana so we run as a team and spend Thanksgiving with our coaches.” Milesplit Arizona wishes them the best of luck and is confident they will represent the Grand Canyon State well.