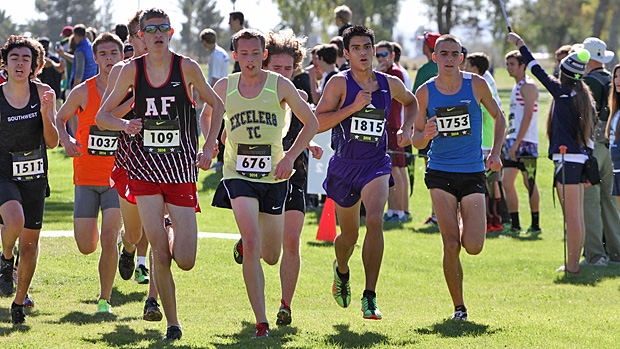 Carlos Villarreal blazes to an NXN berth with 14:55 runner-up finish at NXR-SW (Photo by Alan Versaw)

Carlos Villarreal has been dominating Arizona cross country all year. Often times he has run races essentially unchallenged. NXR offered the chance for him to go out and compete with the best of the other states, and compete he did. Placing 2nd with a blazing fast time of 14:55, the Rio Rico senior punched his ticket to the NXN meet in Portland Oregon on December 6th.

From the get go it was a fast race. NXN qualifier Paul Roberts (CO) explained, “This was a really competitive race, we went out in 4:45 for the first mile and only picked it up from there. The competition was really strong.”

The race was bunched in a tight pack, something Villarreal has not seen much of this season in Arizona. Page’s Jeff Miller tried to take a turn in the lead to spread the pack out but quickly faded. Villarreal played his cards more patiently. “I didn’t really make a move, I just tried to maintain and stay with the lead 3 or 4 guys. Then eventually at the two miles it started spreading out a little more, down to the top 6 and after that I just knew I had to keep pushing if I wanted to have a shot of going to Portland.” Despite his patience it was still a tight race between him and his competitors.

The competition also made the race comfortable, “Running in a pack makes everything a lot easier, you just have to flow. If you stay with them, there is going to be that one guy that takes the lead and you just drift off of them. When you are by yourself, it is just you against the clock.” There is something to be said for trials shared with friendly competitors, especially when one has family and friends there to support.

The energy on Fransisco Grande Golf Course was palpable—from competitors and fans alike. The atmosphere encouraged many runners to do their best, including Villarreal. “You get energy from the people; the crowd was just going crazy. The fans were loud. They lined the entire course. It just kept us motivated. You couldn’t hear anything as you went around the turns. That’s how loud the crowd was. It sparked the runners and it kept us pushing hard.” With about 500m to go Villarreal and Josh Collins (UT) passed Roberts who had led most of the third mile of the race. In a mad dash for the finish they fought until the very end, with Collins edging Villarreal by a mere second. You can watch it here.

Villarreal’s coach, Steve Schadler, recalled the push he made, “I started feeling pretty good with 1000m to go and with 600m to go I was losing my voice.”  Like he told Allie before the girl’s race, Coach Schadler told Carlos before the boy’s race, “You belong here.” He expects to relay the same message to them before the national meet. At one point this year Villarreal had the top time in the nation and Coach Schadler explained that he deserves to be at nationals and should not be afraid of anyone.

Villarreal also has lofty expectations for his upcoming race at NXN, “My goal for Portland is to be an All-American. I want to try and finish in the top 10. It is going to be really different. It will be cold, nothing compared to Arizona, but it will be fun running in a different type of environment.” Hopefully the cold doesn’t bother him too much since, as he showed today, he can go out there and run with anyone. 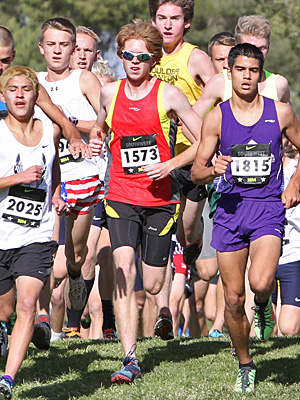 There will be two representatives from Arizona in Portland. Mesquite senior Tyler Day (photo, right, by Alan Versaw) managed to snag the final qualifying spot after a late drop propelled his 8th place finish into 5th and final qualifying spot. Having used his runner up finish at the state cross country meet a couple weeks ago to fuel his fire, Day wanted to make his last in Arizona race count. “When they said my name I just started screaming, I couldn’t control myself, I even hugged Bernard Lagat. I feel pretty pumped!” Meeting up with his mother under the Nike tent, tears of joy came out when he hugged her. It was impossible not to be happy for him.

Unfortunately, the Arizona teams were not able to match its individual’s successes. Page coach Mac Lane lamented that his team did not perform as well as he or they would have hoped, but hopes it lights a fire in his guys. He full anticipates that they will be ready for the track season. Desert Vista had the best place as team from an Arizona school. They came in seventh with 265 points. Coach Chris Hanson commented, “The Utah teams dominated. I told them not to be disappointed. We were 20th last year, and we were 7th today. That’s not where we wanted to finish, but we made a huge jump. We know the competition is great. This is one of the best regions in the nation. We need to leave a smaller for window for error. We know we have to get better it’s that simple.” Utah teams swept the top places with American Fork (72), Davis (75), Timpanogos (149) and Desert Hills (189).

The athletes certainly weren’t disappointed. Senior captain Ben Davis was rather upbeat after the race, “As a team I think we did better than last week. We had 4 guys under 16 minutes, this is far better than we have done in the past. I don’t think it was as good as we wanted to do but we are going to walk away happy.” As they should, beating every high school from Nevada, Arizona and New Mexico and only losing to one Colorado team is certainly a successful year.