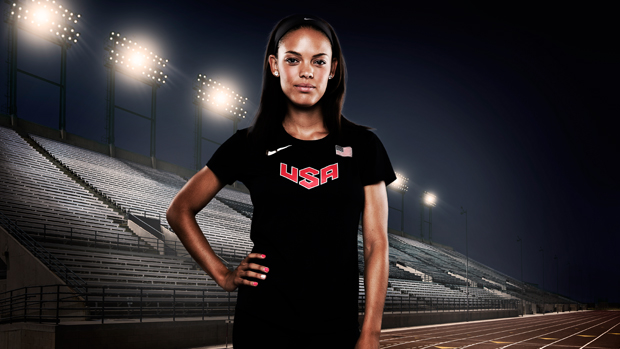 As a freshman in 2011, Hamilton's Ashlee Moore won the high jump at the Arizona State Meet with a impressive jump of 5-10 - a US #8 mark.

The following month she finished 6th in the Heptathlon at the Great Southwest Classic in New Mexico.

A two sport athlete all through high school, Ashlee played basketball up until the first track and field meet of the season - where her pre-season training also started.

As each season progressed, so did Ashlee's marks and last spring at the Arcadia Invitational she won the Heptathlon with 5048 points - the first time reaching 5,000 points.

Two months later Ashlee won the Heptathlon at the Great Southwest with an almost 300 point PR for 5311 points.  Exactly one month later she again won the Hep at the USATF Junior National Outdoor T&F Championships with an all time mark of 5418 points.

Ashlee is a freshman at the University of Oregon and will focus completely on track.

Ashlee Moore Leads Hep after 4 Events at the GSW