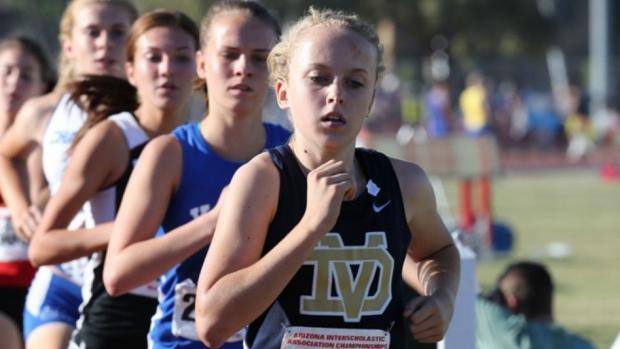 Baylee Jones is one of many young Desert Vista athletes who look to score big points at state. Photo by Margot Kelly.

The harriers from Desert Vista high school return to track and field hungry this season. Their goal is a state championship. Coach Cline-McKensie makes no bones about it, “We want to end the season with a first place trophy in our hands."

Desert Vista certainly has the talent to do some damage at the Division 1 level. Leading the way is none other than Colorado bound, nationally recognized, distance phenom Dani Jones. Dani is a real threat to hold every distance record in the state of Arizona by the end of May. With Highland star Lauren Ellsworth possibly sidelined with an ACL tear from last fall, Dani becomes an odds on favorite to break her own and Laurens state records in the 1600m and 800m. If her cross country state course record was any indication, the 3200m state record could also be ripe for the taking. Additionally, with the depth of the team that has her sister Baylee Jones, Haley Wolf, Mandy Davis, Mason Swenson and more, it's hard not to start thinking about the 4x800 as well. Last year Desert Vista was only a few seconds shy of the record. Cline-McKensie makes no promises on what is to come or who will run the relay, “Coach Messer and I will have to talk about how to utilize our depth."

Despite an unprecedented sweep of state records being within reach, Dani does not focus on being in limelight. In fact, she is far more comfortable not being in the spotlight. Cline-McKensie indicated that she is the first to help out her teammates. “She is a leader by example, the younger girls on the team really look up to her," explains Coach Cline-McKensie, “She pushes them; she is our team. Dani puts herself in the middle of it all, she is one with the team." Hopefully Dani's dedication rubs off some of the younger athletes. Coach Cline-McKensie is optimistic, “We want to continue to build athletes in Dani's footsteps. We want them to continue to come up and performs to expectations."

Expectation are high across the board for the power house, maybe no more so than Arizona State bound pole vaulter Vanessa Davis. Having been locked in a rivalry with Highland High senior Nicki Baker through out their high school careers, Vanessa's Coach, Jeff Guy doesn't want her to think about the pressure. Rather, he wants her to think about the next jump. Cline-McKensie has great faith in Vanessa's abilities, “If she can focus on the next jump there is not going to be a rivalry this spring." Those might be fighting words to Nicki, but in any case this spring the state record should fall in the women's pole vault. It is currently held by Nicki.

Like the boy's squad the sprint team is a strong point for the Thunder. Also like the boys team they are a young group. Kendall Glover and Shea Landeene look to lead the way in the hurdles. As volleyball players they will be splitting time with club this spring again, however, Cline-McKensie indicated that she has worked out a deal with them so that they get a little more track time. Considering they were already some of the states finest last year that thought could be scary.

Volleyball is not the only sport Coach Cline-McKensie will have to find a time to negotiate with. Lexi Hartley, Olivia Thorburn and Aliya Simpson all play soccer in addition to track. One can only hope they are as good at soccer as they are at track. Together they help form one of the fastest sprint crews in the state. After being knocked out of the 4x100m in the prelims last they will be hungry to compete this year. “Our expectation is to have someone in the top 8 in every event," explained Cline-McKensie. With nearly everyone returning from last years runner up squad this goal certainly looks do-able for the Thunder.

In typical Desert Vista fashion, they have strong freshman who they hope will get to state, if not score. In addition to Haley Wolf in the distance races, Claire Dement looks to do some damage in the short sprints and long jump. Coach Cline-McKensie also indicated they might try and see how she looks in the triple. If they do that, Reba Reeves, a returning 34'+ jumper, should be able to help mentor her.

A track fan might wonder if there is any weak link in the Thunder's armor, the answer is yes, the throws. After losing Kensie and Isabella Holmes-Digiovin to graduation, Coach Cline-McKensie is hopeful that they will be able to develop some young talent in the throws.

This season, the team is young, but Coach Cline-McKenies is optimistic, “With a young team, it's about being a teacher, staying positive and never giving up. We need to focus on overcoming adversity and looking at the next event up. You can't dwell on what goes wrong. We need to be there to support each other." If the Thunder can live up to these expectations the season looks bright for them.

Editors Note: Since I am new to Arizona Milespit, I have not had the chance to get to know a lot of coaches well. This series will be of coaches I do know and have contact information for. So coaches, if you want your team profiled, please shoot me an email and lets set up a time to chat. I am looking forward to meeting you this spring!