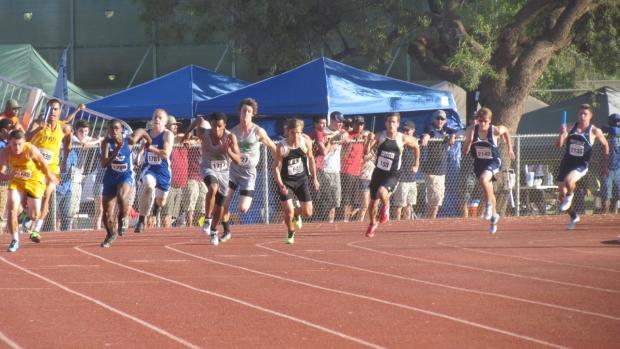 It is easy just to focus on the bigger schools, but one would be missing a lot of talent if they did. Smaller schools often have gems of talent. Shoot even Emma Coburn came from a very small school (look for an article about that this spring actually). Arizona Lutheran Academy is one of those small schools that has some talent. In fact, I was contacted by Josh Hoskinson, an alumnus running at the Colorado School of Mines.

Josh was one of the biggest losses from last year's squad. After sweeping the distance races last year the Coyotes will be left will a void to fill there. Not only did he graduate but two of his other state championship 4x400m teammates, Luke Winterstein and Michael Massedah, also moved on to bigger and better things. All hope is not lost for having another good season this year though.

After reaching out to Coach Scott Loberger I was able to learn that Arizona Lutheren also returns a lot of talent this spring. The 4th member of last years 4x400m, Gabe Galvan, returns for the Coyotes. In addition to the 4x400m title last spring he brought home gold in the long jump and 400m. Look for him to be a big scorer again this May at Mesa Community College. He is not the only state champ the Coyotes bring back. Jess Llanez won the 300H and placed 4th in the 110H last spring. He will return eager to improve on those placing. The other top returners for the Coyotes are Jake Segura who placed 4th in the shot put last spring and Brady Cook who was 4th in the triple jump. Repeating a championship is tough for anyone, just ask Pete Carroll and the Seattle Seahawks. But with the talent that the Coyotes bring back they will certainly be a factor in the division 4 team race this spring.

Coach Scott Laberger is cautiously optimistic about his freshman this year as well. While it may be to tell who exactly will do well this season he does think there will be some scorers in years to come. In the short term they should be able to help out on the relays. In addition to the new talent, some returning athletes that have made significant gains, specifically Brady, James Pauley, and Jake. Those three should be a much larger part of the scoring picture for the Coyotes at the state meet this spring than they were last year.

While Coach Loberger doesn't set team goes, he does set the team theme. This year the Coyotes will be focusing on making an effort. Coach Loberger explains, "We apply this through weekly devotions that center around making the effort for our faith, team and friends."