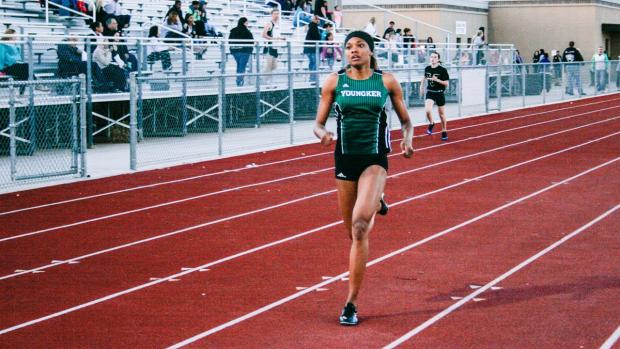 Courtnee Oglesby blows the doors off her competition at the Verrado meet in the 400m. Arizona Milesplit Photo.

Courtnee Oglesby was picked as athlete of the week for winning the 400m, 4x100m and 4x400m at both the Verrado and Buckeye meets this week.

Many runners are scared to run the 400m, but one wouldn't expect to hear something along those lines coming from the defending state champion. Yet, Courtnee Oglesby described leading the 400m as being "really scary!" Courtnee clarified, "Because you don't know where people are. It's hard to judge how you have to push and you don't want to get caught." Even though it is scary, Courtnee prefers to lead. "I just don't want to lose" Like with most things in life winning takes hard work.


The Youngker senior's preparation starts at practice every day. One of favorite workouts are sling shots, "You start at the top of the curve and break into lane one on the turn," she explained, "It really helps with the last stretch of a race." The slingshots in practice paid off for her on Saturday as she had to push all the way through the tape to ensure victory in the 400m.


These early season meets are more than just a race or two for Courtnee. "They help give me a goal, they give me something to improve on as the season goes along," she said, "so I can give myself opportunities to develop and grow as an athlete." Part of developing as an athletes is setting goals and achieving them. The successes Courtnee has achieved leaves her hungry for more.

One of the goals she set for herself this season is running a 54 second 400m, this would be a two second improvement from her 56 that she ran last year to win state. With her 60 second 400m this past weekend she is already about 2 seconds ahead of where she was this time last year. Courntee also wants to win state again. "Second is OK, but I know I can get first." Arizona Milesplit wishes Courtnee as she seeks to repeat at the Division 2 state meet this spring.