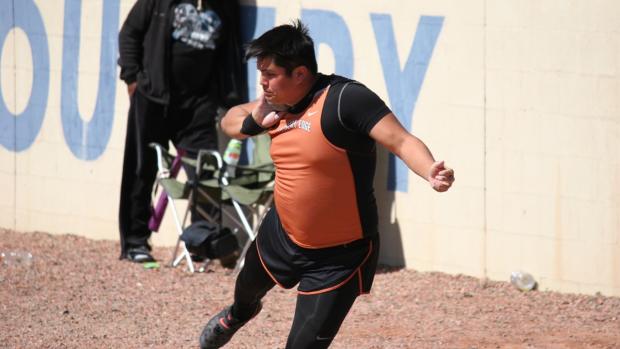 Hunter Jones from Desert Edge is Arizona Milesplit's athlete of the week for his dominating performance at the Buckeye Invitational.

The old adage that hard work pays off certainly is true. Hunter Jones is living proof of that. Outside of working with the football team in the fall his athletic life revolves around throwing a shot put. Having competed in club competitions across the country, he is certainly an experienced thrower. Like many experienced athletes he has big goals and dreams. This season he wants to throw 58' and win state. After his runner up performance last year, he is the top returning thrower in division 2 this season. In fact, Hunter has the 3rd best returning throw of anyone in the state and the top returning throw for a junior this spring. However, he is not satisfied with not being the top. "It motivates me," Hunter stated in reference to the competition, "they make me want to go bigger."

Hunter doesn't let the early season meets stress him out. "It is just more experience," he explained, "it is a good time to work on my technique and get some practice." Hunter is serious about improving and so is his coach. Hunter is coached by his father who takes him to throwing clinics annually and is there at every meet to cheer him on. Hunter appreciate the support. "I like it, but its a lot of pressure to get things right," Hunter said with a grin.

Throwing is a family affair in the Jones household. Second place at the Buckeye Invitational on Saturday was none other than Tyson Jones, Hunter's younger brother. "Its kind of a different experience for him," Hunter said, "its good for him to see what others can throw."

Arizona Milesplit wishes Hunter, and the rest of his family, good luck in the meets to come. Stay tuned to see how they do this year!