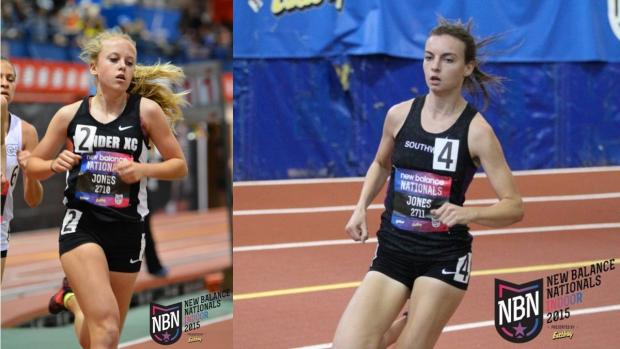 Over the weekend, away from the AMDG and Husky Invites that many of us went to was another competition…New Balance Indoor Nationals. Yes, running inside might seem like a strange phenomenon for most of us who live in Arizona but Indoor Track is pretty big in other parts of the country, especially on the east coast.

Despite being far away from home the Arizona harriers had an enjoyable experience. “The atmosphere was amazing," described Chandler's D.J. Ware, “so many top athletes from all over the country!" D.J. Ware rose to the competition setting a PR of 6.93 in the semi-finals. While pleased with his finish he possibly suffered from not being race sharp like many of the east coasters. D.J. explained, “For the most part I was pleased, personally I thought my finish could've been better but you only get better from running races. I'm just happy I got to compete with the fastest kids in the nation and place in the top 15."

In the girls mile Desert Vista's Dani Jones was regulated to the middle of three heats. I have no idea why the meet directors did not include one of the nation's finest distance runners in the fastest heat. I am not sure they had any idea either after she ran a 4:44.90. Dani's time not only won her heat by almost seven seconds, it was the third fastest time on the day. This is especially impressive since many east coast runners are race sharp already. Dani has not had an indoor season to sharpen up. Look for her to turn some heads across the nation before she relocates to Boulder Colorado to run with the Buffaloes.

Dani is not the only speed demon in the Jones household. Her younger sister Baylee Jones notched a blazing 10:49.92 in the 2 mile. After spending most of the race in 5th place a late race surge allowed Baylee to move up to 3rd place in the first heat. After the dust settled on the second race of the day Baylee's time held up as the 13th fastest. It is also interesting to note that her time was the third fastest underclassman time. It will be interesting to see how she develops over the course of this spring and the next two seasons.

The valley was not the only part of the state that sent athletes to compete at nationals. Page High School sent Jeffery Miller to run in the mile race. He represented the Sand Devils well winning his heat with a time of 4:19.24. As many track fans know, the mile is longer than the 1600m. His performance converts to a 4:17.74 over 1600m. This is very close to his PR of 4:16.49 set at the Meet of Champions last spring. Look for him to give Pre-Season Athlete of the Year and Division 3 rival Carlos Villarreal a competitive race this spring.

The local final athlete to compete at nationals was state record holder Nikki Baker. She placed 15th with a vault of 12-4.75. This was just shy of the 12-6 she notched at the Aztec Invite. Look for her to surpass both of those marks in the weeks to come.

A special thanks goes out to Jeff Guy who texted me the results to tweet out while I was at Church.

No video available for Nikki Baker :(.