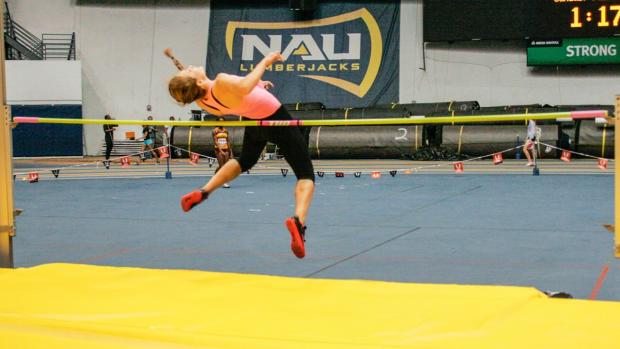 Shannon Fritz jumps at the USATF West Zone Championship meet. Her hard work in the off season should pay dividends this weekend at Chandler. Arizona Milesplit Photo.

For the sake of the preview articles I have combined the hurdles with the field events. I know hurdles can also be clumped with the sprints. My rational behind doing this is that it helps distribute the events I feel like I can knowledgeably comment on based on what I have picked up on my first two week on the job. Additionally there are so many good sprinters I already had a pretty full article for them as is.

In a state with one of the nation's best pole vault coaches it is natural to expect that the pole vault competition to worth watching. Saturday will not be an exception. Defending Chandler Rotary champion Vanessa Davis will take on Arizona all time girls state record holder Nikki Baker. After vaulting 12-4.75 at indoor nationals Nikki is looking to get closer to 13' this weekend. Keep one eye on the pole vault put though, since training partners and rival Vanessa might slip by her if she is not able to improve. Colorado's Taylor Alexander returns to the Grand Canyon State after competing at the Zone West USATF Championships this winter. If either of the top two falter look for her or Desert Vista's Aliyah Simpson to move of the leader board. Shannon Fritz, who is also an accomplished high jumper, also has an outside shot of figuring in the pole vault.

Shannon has a better shot of coming away from the meet with a medal in the high jump. She is among the leaders in the event that features Colorado's Kayla Kearney and Zarriea Willis of Alhambra. It should be a three way competition between those three. Speaking of three way competitions the shot put looks to be the same deal.

The best throwers all come from the south side of the Phoenix area. Maybe they put something in the water down there, who knows. Kayleigh Conlon, Onnika Scott and Corneisha Mitchell should lead the way in the girls shot. They have all had marks in the 39' to 40' range so far this season. Look for them to compete with each other for the top spot on the podium. Onnika Scott is certainly a favorite but a vulnerable favorite.

Last year the hurdles were deep and this year is still pretty strong with five strong California girls in the high hurdles in Jasmyne Graham, Jaela Williams, Sydney Mosely, April Sutton and Jenette Paul. Look for them to make a strong run at a sweep for the Golden State. Mountain Pointes's Autumn Smith stands the best shot of breaking that up though. In the 300H Arizona looks much stronger. Look for Jasmine Stauffacher Gray to take on the California contingent. Other strong local runners who figure to score are Mareena Denham of Willow Canyon and Youngker's Alanisse Williams.

Want to know more about the meet? Heat sheets, schedules and more information can be viewed here!