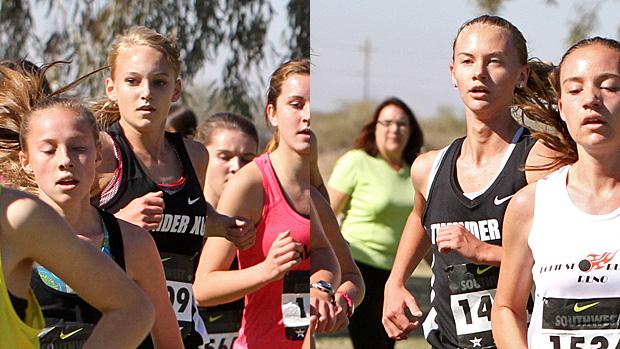 "Records are meant to be made," declared Nina Moore.

Who is Nina Moore? Why am I quoting her on AZ Milesplit? What's this about a record? And how on earth do I get a free subscription?!?

Well, Nina Moore was part of the 2008 Saugus girls distance squad. I know, I know, I just introduced another question, why am I writing about a California high school from 8 years ago on Arizona Milesplit? Well they were the last team to break the girls 4x1600m national record at the Arcadia Invitational. Well...that is until, hopefully, this weekend.

On April 10th at the Arcadia Invitational the Desert Vista girls distance squad will be racing in a very fast 4x1600. It would not surprise anyone to see them or another team better the national record, now held by Robert E. Lee HS (Florida). Thankfully the Thunder harriers won't be the only fast team on the track. Great Oaks (California), who also made a record attempt last year will be chasing the record again. On paper they are a stronger team than they were last year and Desert Vista distance Coach Jeff Messer considers them a favorite. While Desert Oaks may be theoretically faster, Arizona fans know only fools rule out Dani Jones who will be anchoring for the Thunder. If the race is close, expect Dani's kick to be the deciding fac. I know I would be scared to have Dani chasing me. A good relay team takes more than just one good leg though. The Thunder have three other strong runners to compliment Dani.

Leading off for the harriers from Ahwatukee will be Baylee Jones, who will hand to Mandy Davis, who will in turn hand off to Haley Wolf. All four of these girls were on the team that placed 5th at Nike Cross Nationals this fall, so big pressure shouldn't be anything new to them. While the pressure might not get to them, it is still early in the season. Historically distance records are set later in the season. "It's tough to run fast early, not everyone trains like a champion this early," explained Nina. Even a few weeks of training can lead to big jumps in fitness. The Saugus girls' clocked 20:03 at Arcadia. If they had run the relay later in the year, their PR's add up to a time much faster than the current record.

If anyone is in championship form it is Desert Vista. So far this season Dani has placed 3rd at NB Indoor nationals and held off arguably the best prep 1600m field ever assembled on Arizona soil at the Chandler Rotary. Baylee also notched a top 15 finish NB Indoor Nationals in the 3200, while Mandy and Haley have already turned in performances this season that would easily have been the fastest on most teams in the country last year. This combination of talent and fitness makes Robert E. Lee's 19:52 seem very attainable. Coach Messer is more concerned about his athletes competing well than snagging a record, but what a race is in a coaches eye might not be what a race is in a fans eye.

Coach Messer believes in his girls though, "We believe that the aforementioned foursome should be a competitive foursome," he stated. Nina, who hopes to be in attendance, wishes the girls nothing but the best, "I hope they run well. I wish them good luck!"

So....now that you know who Nina is and why I was writing about her...what about a free subscription. In the comment section below guess which place and time the Desert Vista girls will get. Place will be the primary determinant and time will be a tie breaker for people who correctly guess the same place. The winner will receive a free Arizona Milesplit subscription! If you already are a subscriber you will have time added to the end of your subscription. Good luck and wish these girls luck as they make a run at history! 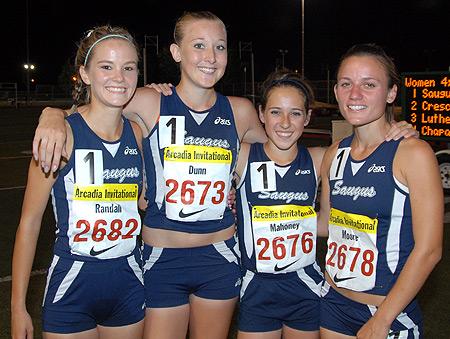 2008 was the last time the Arcadia meet produced a national record in the 4x1600, will 2015 be the year someone celebrates like the Saugus girls? (Photo by Brandon Jauregui donated by Nina Moore).