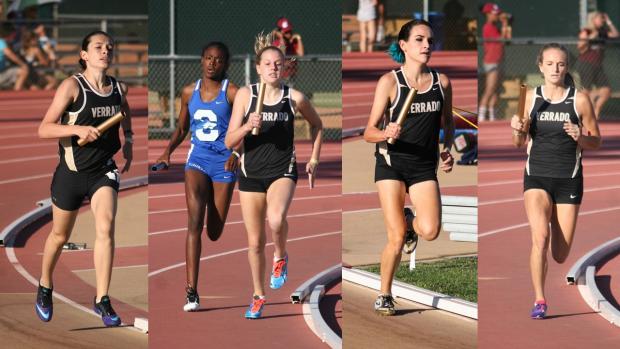 The Verrado girls sent a message other division 2 4x800m teams, they are ready for prime time. Arizona Milesplit Photo.

[Editors Note: This weeks Sun Angel coverage will be free of charge, normally these types of articles are behind the curtain. You can read coverage like this every week starting at only $4 a month or less than $1/week! Sign up right here]

One perk of competing at Sun Angel is seeing Olympic medalists, like Kirani James run. Kirani James was not the only 400m that turned some heads last night. Alena Ellsworth did some head turning of her own. Besting a talented field, which include Anna Foreman of Chandler, the Highland Hawk clocked a 55.37 quarter mile. This times leads all Arizona prep athletes on the season.

Scariest part of Alena's state leading time in the 400m? Her coach, Dave "Monty" Montgomery says she is still just getting into shape. "We think she can unleash something fast," he replied when asked about what he expects from her at the end of the season. As is, low 55's is pretty good. This will put her head to head with 3-time defending state champion Jasmine Stauffacher Gray. "Last year I was so nervous to race her at state," explained Alena. This year expect her to be ready. She has been working on her race, "I have a certain race strategy, it always the same" she explained, noting that she can push herself with or without someone close. Part of her motivation comes from wanting to run for her sister, Lauren Ellsworth who suffered a season ending injury late last fall. Even though Lauren has been injured she has been a major part of the Highland team this spring from the sidelines. In fact, she skipped prom to watch her sister run. It was a good night to come since Alena sent a signal to the rest of the state that she is ready for prime time.

Another signal was sent in the girls 200. Even though Nastasia Peevy of Chandler is in only her second year of track, she was able to take down on of the states finest sprinters in Alexis Center. She started believing a little more in herself after breaking the 12 second barrier in the 100m earlier in the evening. Despite losing to Alexis in the short sprint, she closed dramatically in the last 10 meters. With another 10m more meters it looked like she might have been able to catch Alexis there. It should come as no surprise this came as a huge boost of confidence. "I knew I could [win the 200] after running the 100m in 11.9," she explained. Alexis didn't even notice Nastasia coming up, "I couldn't hear her or see her." Expect Alexis to be watching for Nastasia for the rest of the season.

Another team to watch for the rest of the season is the Verrado girls 4x800m. On Saturday afternoon they laid down the gauntlet for the rest of division 2 girls, clocking the fastest time in the state at 9:47. Senior Caroline Jenson explains, "Our goal is to break the school record, but we are dreaming of the podium." They know their path won't be easy. "We are going up against some fast people," fellow senior Courtney Pansza explained, "But we are cautiously optimistic. We think we are sitting in a good spot right now." Racing division 1 leading Chandler had them nervous though, "It added to the nerves" junior Savannah Neu added with a smile, "we were analyzing the Chandler girls, who was going to run, and who wasn't." Turns out they only had the clock to race since many of the top Chandler girls were not in action.

Alexis Nichols chose to run the 4x800m so the Wolves could still field a competitive team. This meant she bowed out of the 800m, leaving the field wide open for Maryvale's Yarithza Soto. Even though Yarithza has only been running for 13 months she is among the best runners in the state. Blasting the first 200 in the low 30's she was able to hang on for a 2:17 PR. "I felt it in my legs during the second lap," Yarithza explained, "I was just trying to get a PR." That she did. It will be interesting to see how she continues to develop, sometimes the biggest jumps are from those that are new to the sport.

In the girls 1600 Yarithza victory in the 800m showed as she faded over the last lap, even though she was still able to secure a PR. Tessa Weiss and Sarah Carter from Xaiver snagged the top two spots in 5:07.

Results from this meet and previous meets can be found on az.milesplit.com, each athletes also has their own profile. Claim your athlete profileand you will be able to see historic results. Shoot, if you want you can even edit your athlete profile to make it look spiffy.