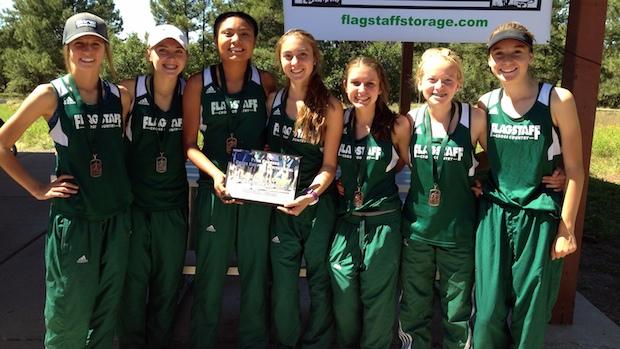 Flagstaff, Arizona is one of the most recognized hot spots for runners near and far. For many of those lucky enough who call Flagstaff home, Buffalo Park means the world to them. So when northern Arizona schools want to test themselves as a community, they race the Peaks Invitational and/or the Four Corners Invitational which was held on Saturday, the 17th of September. Both are hosted by Flagstaff High School, although the routes the athletes raced along the course were different. The one laid out for Four Corners being the faster.

The meet began by first featuring the Open races. Flagstaff's Zach Philpot (Jr.) lead his home team to victory with a winning time of 17:22.8 in the Boys Open, and Reid Belanger (North, Sr.) won the Girls Open with a time of 20:14 as the second-fastest Senior of the day.

The Boys Varsity race featured Phoenix Central's Aron Orar (Jr.) racing at altitude against some of the strongest schools in the region like Page, Tuba City, Hopi and Flagstaff and even Miyamura a team out of New Mexico. Through the first mile, Nicholas Jameson (Miyamura, Sr.) led the race with Hopi's Jihad Nodman (So.) in tow. Flagstaff Juniors Flynn Fuhrmann and Wren Cooperinder followed, pulling the chase pack up the big hill. Around the next loop of the course Vaughn Jackson, the Senior from Tuba City, would climb through that mix and overtake Jameson in the charge for home. Jackson maintained his lead and won the race by 18 seconds with a massive PR of 15:52.9. His previous best mark was 16:32.5 which he ran in 2014.

In the Girls Varsity race, the Page girls opened strong to avoid the crowd in the bottle neck path. Ironwood's Mikaila Lockhart (Jr.) led the first mile around the big hill, but Northland Prep's Maya Smith (Jr.) cruised patiently in second place away from the chase pack and ready to take control of the race. She never let off the pace and blew the field away with a finishing time of 18:39.3, over a minute ahead of the rest of the field.

The Page girls remained as a solid pack up the hill, but over the next two miles Flagstaff's girls dominated their home course with four girls in the top 10 and a total score of 29 points. Juniors Maddy Christopher and Chloe Painter finished 2nd and 3rd for the Flagstaff Eagles, and Mary Gibbs (Cactus, So.) finished in 4th. Page earned the runner-up team title with 110 points.

While Flagstaff may not produce the fastest times in the State, the talent that comes out of the city is undeniably tough and makes spectators anxious to see how the field performs against the speedsters across the rest of the State.