This weekend the Great Southwest Outdoor Classic was held at the University of New Mexico. While most of these athletes compete against each other throughout the season, at Great Southwest the best of each State wore their State jerseys with pride as they represented their home along with their contemporaries.

On Thursday, Jacob Slate racked up some big points in the Hammer Throw with a mark of 231-01. Twice Jacob threw the ball and cord past 230 feet extending his lifetime best by over 12 feet, in a performance now ranked at US #2. With regard to his approach in the Hammer Throw, Jacob said "It's all about patience. You have to let the ball throw you, kind of. You wanna' let it do what it wants to do."

In the Boys 100 Shuttle Hurdle Relay at the Great Southwest Classic, Arizona's motley crew of Hurdle standouts defeated the favorite and Meet Record holder, Texas in 55.46 to 56.00.

Trey Johnson won the Open Boys 100-meter dash in 10.68. That night in the Open Girls 200-meter dash Jadyn Mays and Anaya Bailey went 1-2 in their heat. Their times of 24.05 and 24.10 respectively, were the second and third best among the girls when merged. In the Boys Elite 400-meter dash, Tyrees Moulton raced against US #1 of Florida Tyrese Cooper, and US # 8 Sean Burrell out of Louisiana, and finished 3rd while running an AZ #2 All-Time performance of 46.51. He now stands only 2 one-hundredths of a second away from Spencer Chase's Arizona All-Time State Record. 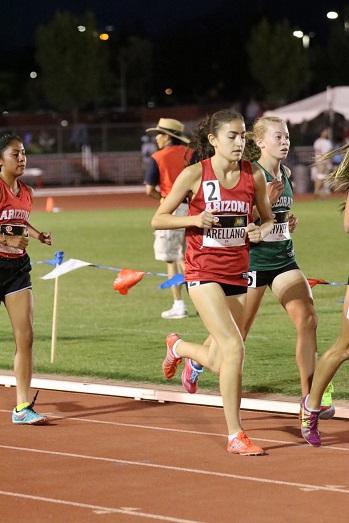 In the Jumps, Jai Gruenwald took 3rd with a PR of 19-11.5 for Long Jump. Jillian Lombardi finished 5th with 18-10.5. After taking 6th in the Long, Brittany Patterson finished runner-up in the Triple Jump with a lifetime-best mark of 40-05.

After running as teammates on the Meet Record Shuttle Hurdle Relay, Trey Johnson (2nd in 13.80), Edwin Adams (4th 14.09), and Brandon McGuire (5th in 14.10), all finished on the podium for the High Hurdles. On the Girls side in the 100-meter Hurdles, Brielle Sterns took 3rd with a PR of 14.15. Then in the Low Hurdles, State Champions Jae'Nisa Heckstall and Jai Gruenwald finished 2nd and 3rd, by only a hundredth of a second apart. Their times of 42.23 and 42.24 respectively, are now the fastest of 2017 for Arizona.

In the Girls 4x400, Arizona's 2nd leg Anna Foreman, made a decisive kick to put the Grand Canyon team in the lead. On the 3rd leg, Missouri's Courtney Williams made up ground on Arizona down the homestretch to put them in the lead for their anchor Hava Turner. Meanwhile Arizona's superfrosh of the 2017 season Jadyn Mays knew very well how to execute her finish. After holding her position behind Turner, Mays unleashed her kick around the final turn and shut it down for Arizona in 3:46.24.