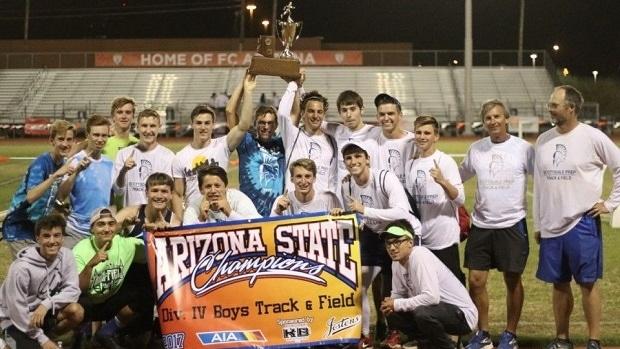 Bob Shisler (second from the right) with the D4 Boys State Championship team.-photo by John Hays

The U.S. Track & Field and Cross Country Coaches Association (USTFCCCA) announced Wednesday the state-by-state winners of its fourth annual High School Coach of the Year award for track & field.
Started in 2014, the award is bestowed to selected coaches based on a number of criteria: their teams' finishes at their respective state championships, the number of different events in which athletes were qualified, individual championships and how their teams' performances stack up to previous years, among other criteria.
One boys coach and one girls coach from each state -- and the District of Columbia -- is selected.
This year, Scottsdale Prep's Head Boys and Girls Coach Bob Shisler was awarded the title for both categories. This past May, his boys won the Divsion IV State Title while his Spartan girls' team took runner-up. Seniors Kayla Sklar and Matthew Musial earned crucial points for the Spartans at the State Meet, in the long jump and the sprints, respectively. Weston Wright (Sr.) and Karsten Santaella (Jr.) dominated the Division IV throws while also being competitive with the best in the State. Finally, Ali Goodson made a huge breakthrough as one of the Arizona All-Time bests in the Girls Pole Vault with a mark of 13-01 this season!
Each honoree will receive a trophy from the USTFCCCA recognizing his or her achievements. As a bonus, the winners from each state are now in consideration for the USTFCCCA's National High School Track & Field Coach of the Year Award. One boys coach and one girls coach will be chosen by a panel of experts and those names will be announced later this month.
To see a full list of winners click here.
Tweets by MileSplitAZ