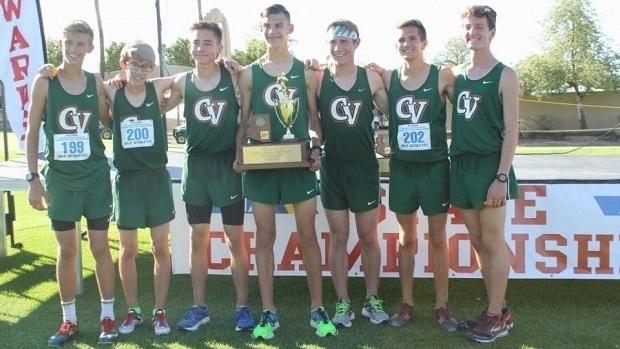 The Campo Verde Coyotes look set to make some big noise this fall with five returning boys under 17 minutes for 5k. Their ace, Rylan Stubbs (So.) finished 3rd in the D2 State Meet last year and holds PRs of 4:22.09 for 1600m and 9:21.58 for 3200m from the #Breaking9 race at the Meet of Champions. Zach Prusse (Sr.), Kenny Edwards (So.), Zac Whaley (So.) and Ben Reidhead all dipped under the 17-minute barrier last fall. Zack Prusse placed 7th at the King of the Mountain Invite and ran 16:45 to finish 11th in the D2 boys race at the cross-country State Championships and Kenny Edwards was the only other boy to break 10 minutes for 3200m for the Coyotes. The Coyotes have been hard at work with quality training this summer and have their sights set on a Division II State Title.

When did you begin coaching Cross country and how long have you been at Campo Verde?
I started coaching in 2008. My first season here was in the fall of 2010 and so this will be my 8th year at Campo.
Who are your impact freshman or incoming transfers?
As far as transfers go, no students there but we have a large new team. Our class of 2021 makes up almost half of our group. At this point we see emerging talent from Anthony Cox and Wyatt Hanson. Hanson won the Middle School race at Desert Solstice last year and ran a 4:55 mile at the junior high championships. Anthony Cox was kind of a surprise to us, but has shown a lot of talent.
What are the basic tenants of your coaching philosophy?
The first and most important is that the reason why cross country and any sport exists in high school is to supplement the educational program. For us it's teaching the life lesson in sport that you maybe can't teach in a classroom. Things like how to set and work toward achieving goals, how to work together as a team, how to be somebody who's dependable to others. We view this as more than just about running, but about character development. Those are the most important things we try to communicate in our program. Outside of that, our goal is to try to get them in the best shape physically while putting them through the least amount of stress possible.
What kind of mileage are you guys doing and what has been the focus of the current phase of your training?
During the summer, we do a foundational and injury prevention phase. For us that means building up general strength in order to tolerate more stressful workouts. After about six weeks we transition into 'early quality' which involves hill-running and practicing form. A lot of the workouts we do over the summer are not long miles and look more like cross-fit workouts. Generally speaking, I would say our mileage is a whole lot less than some other programs. We do everything by duration and so the longest run they'll do will be 35-40 minutes and then once a week do a long run which represents about 25% of their volume.
What is the most important thing you want young people to learn through running?
The thing I would hope for them to learn is that they have the ability to overcome challenges and it comes from within and it's something that they can learn to grow and develop. I think it was Oprah Winfrey who said that running is a metaphor for life. And I totally believe that because there's obstacles that everyone will face through any sport, but I think particularly with cross-country that are gonna be similar to the kinds of things that they should expect to see when they're grown. Our kids, when they're adults are gonna encounter all these things that we can't throw at them now but we can throw at them challenges that come from sport and if they can learn to overcome challenges here, then when they're adults they'll overcome challenges when the consequence is much greater.