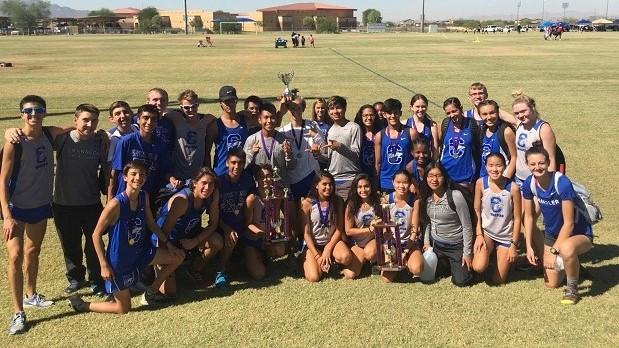 On Saturday October 7th, the Cesar Chavez cross country program hosted its first invitational at their home park. Held as a preview for the Sectional meet on the same course, the Cesar Chavez program assembled west-valley teams with powerhouses like Chandler and North Canyon for a post-Twilight shakeout in South Phoenix.
The meet opened with the Boys junior varsity race, won by Trey Lewis (Chandler, Jr.) in 17:41. Angel Tapia (Fr.) of Maryvale followed in 17:50 as the only other JV boy to break 18-minutes. On the girl's side, North Canyon freshman Maggie Votruba took first in 21:27, followed by teammate and fellow NC rookie Brianna Diaz in 22:01 almost 40 seconds ahead of the rest of the field.
The Boys Varsity race came next, with Chris Ruiz (Sr.) of the Chandler Wolves taking it out hard through the first mile along with Claudio Garcia (Sr.) from Dobson. Around the midway point, Garcia's teammate Scott Sally (Sr.) led the chase in third place just ahead of a North Canyon peloton. After the two-mile, Carl Hayden's Fidel Del Los Rios (Jr.) and Ben Morfin (So.) reeled in the leaders and pulled away for the win in 16:02 to 16:10. When asked about their race strategy, Del Los Rios said "We just tried to stay within the top-15 on the first mile and then from there keep passing people." Ryan Carr (Estrella Foothills, Sr.) finished 3rd in 16:19 ahead of Luis Cisneros (Glendale, Sr.) and Chris Ruiz who clocked in at 16:21 and 16:23 respectively. Christian Gomez (Cesar Chavez, Sr.) placed 6th for the home crowd to hold off Sally in 16:28 to 16:30.
Then in the Girls Varsity race, Chandler secured their victory despite racing only 4 out of their Sweepstakes Championship team from Twilight last week. Teammates Mihajla Milovanovic (Jr.), Kerri Welch (Sr.), and Kylie Welch (Sr.) led the front pack of the race along with Rebekah Neu (Sr.), Stefana Purkovic (North Canyon, Jr.), and Kayla Eldred (Phoenix Central, Jr.) in the mix. Kerri Welch powered through the finish in 18:46, ahead of Kylie (18:59) and Mihajla (19:03), while Eldred finished 4th in 19:11 after enduring the race in such close proximity to the leaders. "I was really trying to stay in the first group, trying to push myself on the second lap as best as I could and kicking to the finishline," said Kayla. Neu finished 5th in 19:48 while Purkovic placed 6th and led the Rattlers to a runner-up team title.
In both races, Chandler came away dominant for the team titles with North Canyon taking 2nd Place. With good competition over a fast course, the Champions cross-country program appears to have all the pieces in place to make the Cesar Chavez Classic into a staple meet for the South Phoenix community.
Tweets by MileSplitAZ