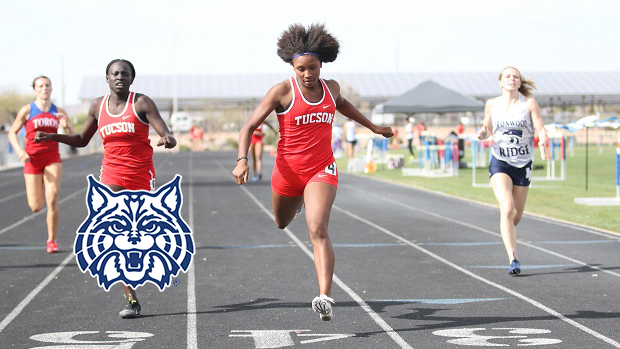 Tucson High School's Neysia Howard is a graduating Senior ready to vie for a State Championship Title in the 100, 200, or Long Jump. Last week, Neysia signed her national letter of intent with the University of Arizona and will continue her athletic career at home. All of this would not have been possible without the relationship her father Tambotka has had with the Tucson athletic community.
Tambotka 'Tam' Howard moved to Tucson as a sophomore in high school and built a reputation for himself as sprinter for Cholla High School with a 10.62 PR for the 100m. Things did not go as planned at the University of Arizona. "I had to redshirt in '93 because of a hamstring injury and later grades got in the way of my career, which led to me dropping out of U of A," said Howard. 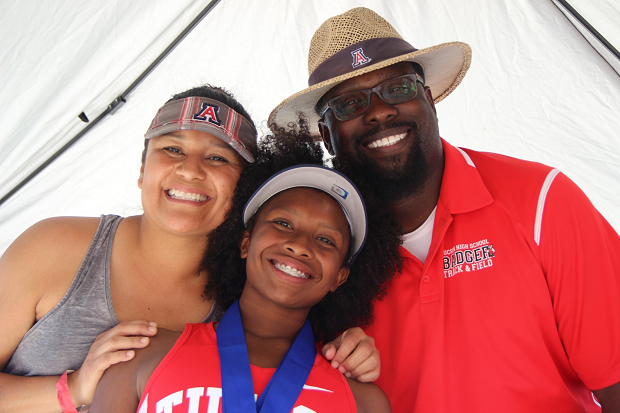 Despite the disappointment he faced in school, his relationship Fred Harvey, Director of Cross Country and Track & Field at the University of Arizona, kept him tied to the sport. "He recruited me out of high school and taught me about earning the respect of athletes by always being there for them. You'd never know if Coach Harvey was having a bad day."
In 2008, Tam started coaching sprints for Tucson Elite Athletic Club with Fred's wife Janet Harvey. "I knew I wanted to continue being involved in track and field and it was me giving back to the sport." At the same time, his daughter, Neysia, started competing as an 8-year-old. "She reminds me of myself because she hates to lose more than she wants to win," he says of Neysia.
Name: Neysia Howard
School: Tucson Magnet HS
Year: Senior
Where are you from and when did you begin running?
I've lived in Tucson my whole life and I started running at 8 years old. My dad and I were playing a game when I was little and when I ran away he knew I would run track.
Did you play any other sports at your school?
(Below: Neysia jumped 19-4.25 in the Girls Long Jump at State last year.-photo by John Hays) 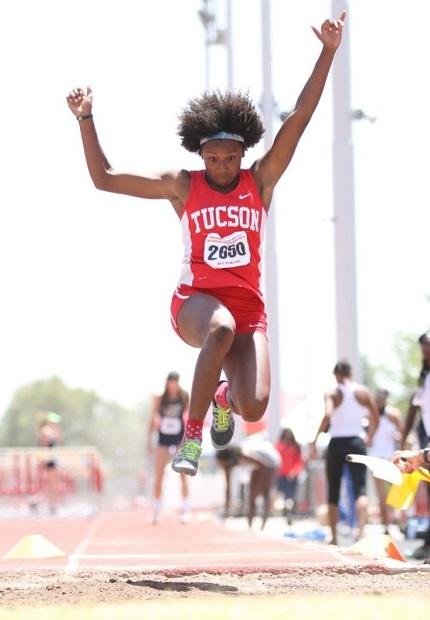 I played volleyball and basketball for Tucson High School.
What is your favorite event out of the sprints and why?
I've always considered myself a sprinter who long jumps but I've never preferred one over another.
What has been your favorite moment in your track and field career and why?
I think my favorite moment would be my sophomore year. I had done really badly in the Long Jump, 100m, and 4x100m at State. I was so upset with how I was performing, I just didn't care anymore. I realized before my 200 that I was actually caring way too much. Going over to warm-up, I said to myself "Do this for you. Who cares what happens? Just run." I ran that 200m in lane 9 and placed 2nd in the state. I didn't believe it but that changed my whole attitude with track, you run your best when you... just run.
You've been competing for Tucson Elite Track Club since you were little. How different is the Club experience compared to the inter-scholastic athletic experience?
As an experience, club is much higher in competition because you get to compete against athletes from other States.
What is your favorite subject in school?
I've always liked science. Astronomy is my favorite and I plan to major in it at U of A.
What is your favorite food you like to eat before race day?
We always say "pasta makes you run fasta". So, we always have pasta the night before.
You've known your future Coach, Fred Harvey, practically your whole life through your career in track and field. What's your favorite thing about him?
I like that he's supportive and always has an answer for every question.

So I guess dreams do come true. #Signed pic.twitter.com/LKgK9lIFF9

Do you intend to compete in any post-season meets, and if so which ones?
Every summer, I compete in the USATF Junior Olympics. State comes first, and if I qualify, I compete at regionals and then nationals.
Are there any shout-outs you'd like to give to friends, family, and teammates?
My parents, my family and friends who've been there for me the whole way through.
Neysia Howard-1st in Girls 100m AIA Division 1 State Championships May 7, 2018
Girls 4x400 Relay Finals Section 2 Southern Arizona Championships Apr 23, 2018
Tucson Lady Badgers-1st in Girls 4x400 Southern Arizona Championships Apr 23, 2018
Girls 100 Finals Southern Arizona Championships Apr 23, 2018
Girls 100 Finals Section 7 Casa Grande Kiwanis Invitational Apr 7, 2018
Neysia Howard-1st in Girls 100 Casa Grande Kiwanis Invitational Apr 7, 2018
Tweets by MileSplitAZ