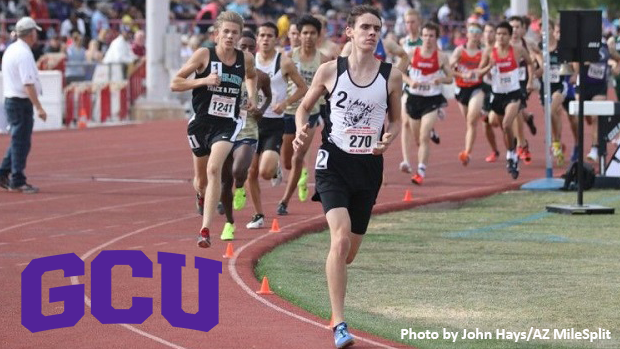 Jacob Lewis graduated from Boulder Creek HS with three school records under his belt from the cross-country and track seasons. He opened his final season in March with 9:27.87 for 3200m in a dual meet against Westview, and 4:18.26 for 1600m at the Brophy AMDG Invitational. While no boys broke 4:20 for 1600m last year, Jacob did it on 4 occasions this year. At State, he placed 2nd with a PR of 4:11.48 in the D1 Boys 1600m and then doubled down in the 800m for the State Title.

Where are you from and when did you begin running?
I am originally from Scottsdale, but I have lived in Anthem for most of my life, and I really began distance my freshman year in High School.
What was your most memorable race?
My most memorable moment has to be winning the 800 at State my senior year, after running a 4:11 mile that same day only two hours before. Nothing can really top that feeling of being a State Champion. 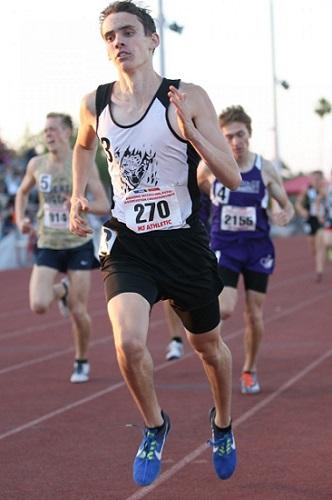 (Jacob ran 1:56 to win the D1 Boys 800m at State.-photo by John Hays)
Who would you consider your biggest competition over your four years?
My biggest competition was myself all four years, just trying to do my best and push myself to limits I didn't think were possible. It is weird but I do consider myself to be the biggest competitor.
What was your greatest accomplishment?
My greatest accomplishment was getting a college scholarship to run Cross Country and Track at GCU. It just shows that my four years of running in High School worked out and getting a scholarship has reinforced my hard work that I have put in the past two years.
If you could do it all over again what would you change about your running career in high school?
I would change my work ethic my freshman and sophomore year in High School because I really didn't put in the effort I needed to those two years, and if I did I could've been way better than I am now. I just showed up and really didn't try at all, I knew I had potential and I knew I was good, I was just not putting in the effort to be great, just to be good enough. Just my work ethic I would change.
What were the most difficult obstacles you had to overcome?
The most difficult obstacle I had to overcome was myself, just being able to put in the work ethic to compete and be a top competitor was hard for me but coming into Junior year I just became a whole new person.
What will you miss the most about competing for your team?
The companionship between my teammates, it was an amazing four years, with some of the best teammates I could ask for. I had a great bunch of friends that have made me a better person and a better runner.
What advice would you give to younger athletes?
Do not go into cross country, track or any sport with a lazy attitude, work hard, put 100% effort in what you do and you will see yourself become a much better athlete.
What influence has your coach had with respect to your performance and overall life goals?
A lot. Coach Clarke and Coach Williams have taught me a lot about running and they were big parts in why my work ethic increased my junior year. They opened up a lot more options for me after high school and I can't be more thankful to them for helping me improve as a human and athlete.
What are your college plans? Have you decided on a major?
I am going to run Cross Country and Track at GCU and I am majoring in History.
What do you like about Coach Slattery's coaching philosophy?
What really made GCU stand out to me was Coach Slattery. She wants us to be the best that we can be and she really wants to make the program be the best that it can be. She is a very experienced runner with a lot of successes, and I know that my four years at GCU with her will bring out the best in me.
You've had significant success in the middle distances. Do you intend to continue predominately in the middle distances or would you like to play your hand in other events like the 10,000m or Steeplechase?
Although I know I my best events will probably be a 1500m and 5,000m runner, I would like to try the 10,000m. You don't know what you are the best at without trying, so I would like to try other events.
Who would you like to thank for your success in high school?
I would like to thank everyone from my parents, to my competitors, and to my coaches, they have made me a better person and a better runner and overall made my 4 years in high school very memorable, and especially my competitors, they are one of the major reasons on why I was so successful and I couldn't be more thankful.

If you could have any superpower what would it be?
I would have the ability to shape the future reality to my own belief.
What's the last album you listened to start to finish?
Heoes by Sabaton, which is a Swedish heavy metal band.
What's your favorite sports team?
The Denver Broncos
What's the best literary work you read in high school?
Phantom Warrior by Forrest Bryant Johnson about the true story of Pvt. John McKinney
If you could have dinner with any three other people who would you invite?
Galen Rupp, Mo Farah, and Audie Murphy the war hero.
Workout Wednesday with Boulder Creek Distance May 16, 2018
Boys 800 Finals Section 2 Arizona Meet of Champions May 11, 2018
Jacob Lewis-2nd in 1600 & 800 State Champ AIA Division 1 State Championships May 3, 2018
Jacob Lewis, Leo Daschbach, Anthony Haren-Boys 3200m medalists Sun Angel Classic Apr 6, 2018
Boys 1600 Finals Section 2 Brophy AMDG Invitational Mar 10, 2018
Jacob Lewis-Crushes Boys 1600 in 4:18! Brophy AMDG Invitational Mar 10, 2018
Tweets by MileSplitAZ