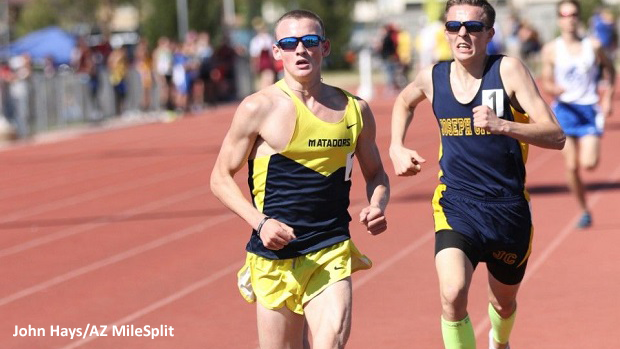 800m -- 1:56.90 @ AIA Division 3 State Championships
1600m -- 4:16.69 @ AZ Meet of Champions
3200m -- 9:39.34 @ North East Valley Championships
3 Mile -- 15:04.20 @ Dana Hills Invitational
Last year, Robby Foster held PRs of 2:10 for 800m and 4:36 for 1600m. This year, he opened the season with victories in the 1600m and 3200m at the Small Schools Invite. At the Ron Smith Classic, he'd run his first sub 2-minute performance in the 800m in 1:58.20 for the victory in front of a home crowd. He ended the regular season as a Division III State Champion in the 800-meter run and runner-up in the 1600m and 3200m and anchored the Shadow Mountain Boys to runner-up in the D3 4x400m. The following week at the Meet of Champions, he ran 4:16 in the 1600m in his last race for the Matadors.
Where are you from and when did you begin running?
I'm originally from Houston, TX, but growing up I lived in Flagstaff, and in Virginia.
What was your most memorable race?
As far as cross-country goes, my most memorable race was my first meet as a freshman when I won the freshman race at the Chandler Invitational, which was a huge deal to me. In track, it was probably at Brophy AMDG when I ran 4:23. I felt really good right before the race. When I broke my PR I screamed with joy and it was a great feeling to know that everything was coming together.
Did you listen to music before competing? If so what's on your playlist?
I used to have headphones in, but now I usually just sit around with a bunch of guys and we listen to whatever's popular. When I'm really needed to get in the zone, I'd listen to Eminem. His old stuff helps me focus.
Who was your biggest competitor?
Most of the guys who I raced most often in terms of time were from Division I and II, but I'd probably say Bowen Martin and Mark Wogan. Bowen had a really good week at State when he beat me in the mile and two-mile and I raced against Mark most often 'cause we were in the same division.
If you could do it all over again what would you change about your running career in high school?
My nutrition was not good all four years. I would probably drink more water, eat more greens and fruits and probably swim on every off day. Getting in the pool to recover and getting my lungs right really helped me this year and I feel like if would have done that more often I would have built up my aerobic base.
What were the most difficult obstacles you had to overcome?
I had never had crazy obstacles as far as injuries. This year, I thought that I had torn my meniscus just before the Chandler Rotary. After a week of training when I couldn't do anything fast, I took it easy a few days before. I went out with the intent to run 4:15 and I ended up running my slowest race of the year.
You had a great race the following week at Ron Smith where you broke two minutes for 800m. How did you manage to bounce back?
I did a lot of swimming and pool running to get my lungs back without putting too much stress on my knee. I put a lot of my mental stress into Gods hands and it helped me remember that I can still accomplish great things. It was our home invite and after so many hard workouts, I was very comfortable running on that track.
What will you miss the most about competing for your team? 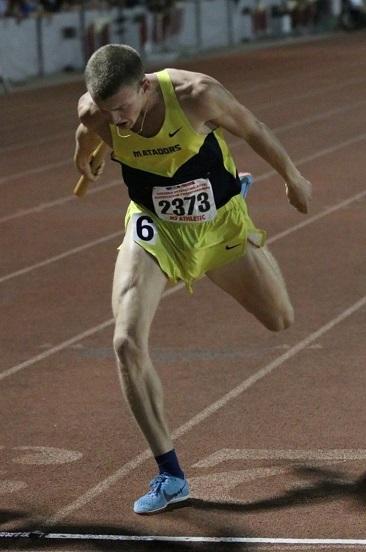 When moved out here from Virginia, I met all the coaches Matt Shannon, Mike Steinkemper, and Ashton Gill. They've always been there for me and it's felt like I've become friends with them. It's awesome to have coaches that feel like your friends and I will miss the relationship I have with my them.
(Right: Foster anchored the Matadors to a runner-up finish in the D3 Boys 4x400 at State.-John Hays)
What advice would you give to younger distance runners?
Do not stop running during the winter in between cross-country and track because that's most important to not lose what you've built during cross-country. Also drink drink water When you don't drink enough water over a couple of days, you can really feel it when you've got to go on a long run.
Judging by your stats, you improved by a lot over the last year. What influence did your coach, Matt Shannon, have with respect to your improvement in performance and overall life goals in general?
I met with him three or four weeks before the start of the season. I always shoot high so that even if I fall short I'll still be good. This year, he told me I already had a strong aerobic base and so we focused primarily on speed and fast tempo runs. Also, one the things he did best was instilling the confidence in me that I thought I didn't have. He was always there to reassure me, that I had the potential to be great.
(Below: Robby Foster ran 1:56 to win the D3 Boys 800m State Championship Title.-photo by John Hays) 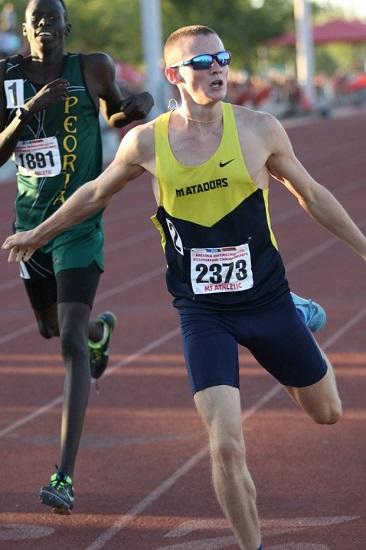 What are your college plans? Have you decided on a major?
I plan to major in Exercise Science and Kinesiology, which I hear is a really hard major. I plan to go into physical therapy if I don't become a professional runner, which is the dream.
How did you decide that Cal State-Northridge was the right fit for you, academically or as an athletics program?
At the Dana Hills Invitational, I ran 15:04 and the next week I got a letter from the coach at Cal State Northridge which was the first D1 school that showed interest in me. One of the things I look for in a coach is someone with whom I can build a relationship. Coach Brock Moreaux's a young guy, so I can relate to him well and he knows a lot too. When he gives me a workout there's always a reason for it.
What do you like to do outside of running?
I'm really into music and dancing but honestly fitness for life is kind of an addiction for me. I grew up in Fredericksburg, VA around a lot of different cultures and in the South, you learn to just be yourself.
Who would you like to thank for your success in high school?
First off, I'd need to thank God because I couldn't have done it without him. My family and especially my mom helped me through so much and definitely those three coaches I mentioned earlier.

If you could have any superpower what would it be?
I'd fly for sure. I used to play basdketball too. Getting a little bit higher and being able to dunk the ball would be amazing.
Who is your favorite athlete?
My favorite athlete is Kyrie Irving.
If you could go on a long run with any professional athlete who would you pick?
Mo Farah. He's done so much on the track and now in the marathon. I could ask him so many questions.
What was your favorite subject in school?
Earlier on it was science, but after I started getting into Chemistry and Physics I definitely liked English better.
If you could have dinner with any three people who would you invite?
Martin Luther King Jr., Lebron James, and Mo Farah again. I love that dude.
What are you most excited to do when you get to Northridge?
My plan so far is to move in to an apartment with three other guys on the team. I'm excited to live with other guys who have the same goals as me.
Boys 1600 Finals Section 2 Arizona Meet of Champions May 11, 2018
Boys 1600 Finals Section 2 Brophy AMDG Invitational Mar 10, 2018
Robby Foster-1st Place Boy AIA Division 3 Section 3 Oct 31, 2017
Tweets by MileSplitAZ