Dear (running) Diary,
Aside from hot temperatures and monsoons, August in Arizona means back to school season. Unlike being able to hide from the scorching temperatures outside, we can't hide from back to school. Even after two months of relaxation, I still wasn't ready to set foot on campus. The only thing keeping me from snoozing my alarm and crawling back under the covers on the first day was the fact that it would be my last first day of school. Senior year was finally here.
The long awaited and highly anticipated hype was finally something that I was a part of as I decorated my senior crown, wore my senior shirt, and paraded into the courtyard with all my senior classmates. But all the excitement was short-lived. In about five minutes I was already over senior year and ready to go back to daily naps and watching TV. I had no idea senioritis would come for me on the first day of school. 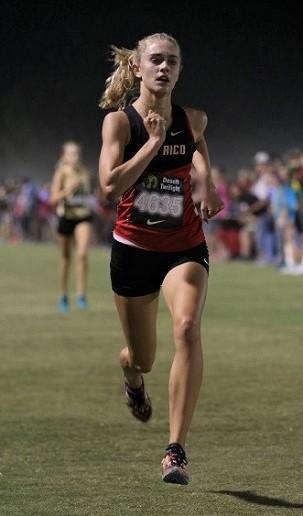 (Right: Samantha Schadler ran State leading time at Desert Twilight, last year.)
Looking back on the first month of senior year I suppose first-day-of-school-me may have been a little dramatic. Getting back into the swing of things was a little hard at first but after week one I was able to push past the daily exhaustion and pick up where I had left off. A strong summer of training allowed me to jump back into some early season tempo runs and long runs with a little less discomfort than they normally deliver, and I was excited to finally get to train with my teammates again instead of doing all my runs on my own. In addition to my old teammates, a wave of new faces hit the RRXC squad this year: a fantastic addition. I had been looking forward to this new group of freshmen for quite a while and at last they were here.
(Below: Rio Rico meets for practice-photo from RRHS Facebook Page) 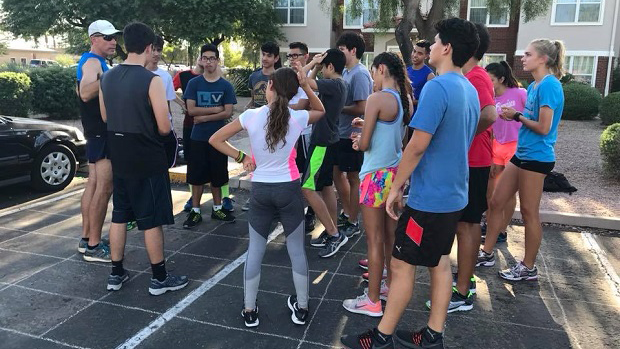 Apart from running, college applications have also been on my mind quite a bit this month. In between summer naps I had been researching universities and trying to get a head start on applications. In an effort to conform to early signing dates, I have been determined to narrow my college search and plan a couple of official visits. The excitement outweighs the stress of the college search, and as November 1st creeps ever closer, I still have quite a few essays to write and applications to submit. My anticipation is high and I'm looking forward to discovering my place in the college world over the next two months.
Although the first few weeks of school weren't seamless, they were overall very positive. Now that things are back to normal and my overly dramatic first-day-of-school self has calmed down, I'm looking forward to the start of racing season, some official visits, and a very successful month of September!
Yours truly,
Sam Schadler
Tweets by MileSplitAZ