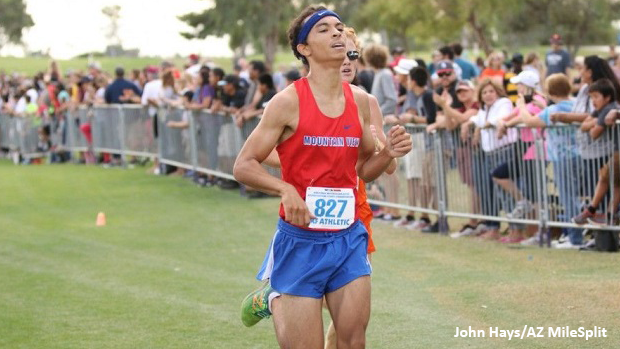 Deshawn Malone stands as Mesa Mountain View's top runner this season. At Fountain Hills, he won the Varsity Boys race and most recently he ran 16-flat in the Sweepstakes Boys race at Desert Twilight. He holds an 800m PR of 1:59 from the Desert Vista Last Chance Meet and was part of the Toro's 4x800m relay team which placed 5th at the AIA Track and Field State Championships.
Where are you from and when did you begin running?
I am from Austin, Texas and I began running cross country in 7th grade.
Do you have a favorite pre-race routine or ritual you could describe for us?
I don't have a specific pre-race routine I do, but I usually listen to music and try to focus my thoughts on the race. I also usually check the course map a few times just to get ideas on when would be good times to start going or staying back.
What has been your favorite moment in your cross-country career and why?
My favorite moment of my cross-country career was probably my sophomore year when I got second at fountain hills. I had one of my best finishes there and was able to pass the person who was in second when we were like 3 meters away from the finish line.
What's your favorite cross-country meet and why?
My favorite cross-country meet is Doug Conley because it is a super-fast and also a relatively flat course. Every year almost everyone on the team gets PR's.
Describe your coach and what they always affirm at practice?
My coaches are almost polar opposites of each other personality wise. Coach Buchanan is a very vocal person and can get a little intense (in a good way) during race time because he cares about the race and the team so much. Coach McElhaney is more soft-spoken but just as passionate as Coach Buchanan. They always affirm that this sport is a grind and that you won't get better overnight. You have to put the work in to get anything out of it.
(Below: Malone ran the 2nd leg for Mesa Mountain View in the Boys 4x800 Relay at the State Meet.-photo by John Hays) 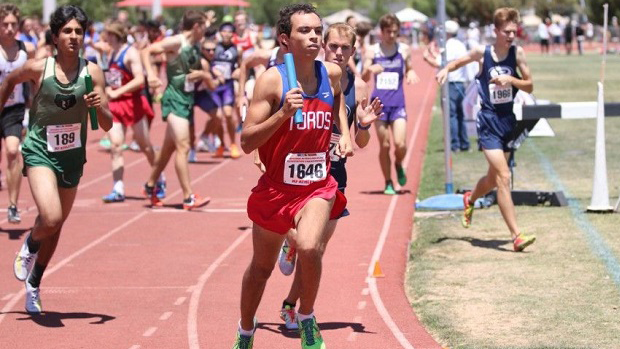 What are your goals for the 2018 Arizona HS cross country season?
My goals right now for this cross-country season are to go sub 16 and once that happens I'll just make some new goals based off of that time. In addition, I aim to be All-State for Cross Country as well and put the team in position to be highly competitive at the State Championship.
Do/Did you have a role model on the team or from years past and if so, what was the most valuable thing you learned from them?
I look up to all of my teammates, everyone out here is working crazy hard but if I had to choose it would probably be Zach Frisch because he is always happy when we are running. Even if our legs are fried from a workout, he is always staying positive and getting hyped for the next days' run.
Are you involved in any other activities at Mesa Mountain View? If so which one(s)?
Right now, I'm not really doing any other activities. I used to do band and chess club but since this is my senior year and I want to have a great cross and track season, I just want to focus on those.
Will you race at any post-season meets?
I don't know if I'll do any post season meets. It depends on how I'm feeling at the end of the season but I'm always interested in them.

If you could have any superpower what would it be?
If I could have any superpower it would probably be the ability to have a crazy healing factor so if I get injured or anything the I can just heal and then I wouldn't have to be worried about getting injured from anything.
What's the last movie you watched?
The last movie I watched was Deadpool 2.
If you could go on a run with any professional athlete who would you pick?
If I could choose any pro athlete, it would probably be Usain Bolt so that I could say I ran with the fastest guy in the world.
What's your favorite workout?
My favorite workouts are ladder workouts where the distance is increasing or decreasing after so many reps. I feel it's a good way to prepare for races and I just have a ton of fun with them.
What is your favorite subject in school?
My favorite subject in school is probably Mythology because I've always been interested in Greek gods and stuff like that and Mythology is basically an entire class about that.
Boys Sweepstakes Race Nike Desert Twilight Festival Oct 1, 2018
Boys 800 Finals Section 5 Hohokam Invitational Apr 15, 2018
Mesa Mountain View Boys-1st at Fountain Hills Fountain Hills Invitational Sep 11, 2017
Tweets by MileSplitAZ