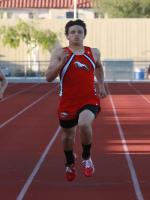 Sort By:
Filter By:

Come watch Devon Allen & Jonathan Cabral prep for World...
Come watch and interact with Olympians Devon Allen, Johnathan Cabral, their coach and Maine native Jamie Cook during an instructional practice, followed by a Q & A session as they prepare for the Worl...

Devon Allen Has Decided To Turn Pro In Track...
Oregon star athlete and US Olympian Devon Allen, who has been a member of the Ducks football team and track team since 2013, has decided to forgo his NCAA eligibility and turn pro in track, according ...