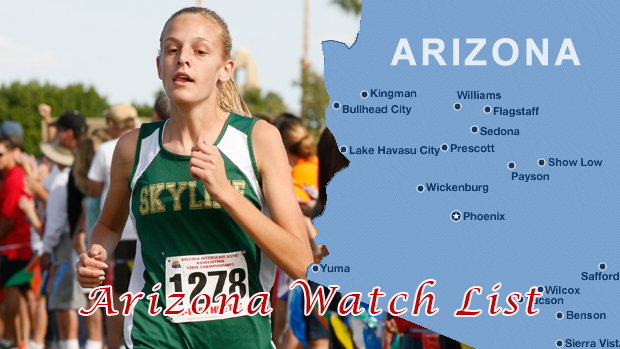 The 2013 Cross Country Arizona Watch List series continues.   As the season gets underway new athletes will be added to the list.  Good luck to everyone!  See you on the course!

What are your goals for the upcoming season:

I really want to break 18:30 and place in state

How is your summer training going?   Your favorite workout?  What kind of summer mileage do you run?

We did a lot of hills. My favorite workout was probably when we went up to Payson for the day and did a bunch of trail runs and swam in the creek up there. I ran around 300 miles which is the most I’ve ever ran in a summer.

How long have you been running and how did you get started:

I’ve been running since I was about 8 because my older siblings ran. I guess you could say it “runs” in the family

Which meets will you be running this year?

What are your favorite and toughest courses to run in State and out of State?

My favorite course is the twilight one because its super fast. The toughest one is probably the O’Connor course because it is full of a lot of hills.

My first race was one of my favorite memories because I was so nervous before it started, but I ended up surprising myself and doing really well. I was so proud of myself that day.

What do you look forward to the most this season?

I look forward to hitting some new PR’s and getting to run with my team. We have a lot of new runners so this should be the best team our school has ever had.

Out of all your running accomplishments so far, which stands out the most?

Taking 4th place at the USATF Nationals in steeplechase.

When you are not running what do you like to do?

I spend a lot of my time playing soccer, hangout with friends, or just relaxing at home with my sister.

I usually lift about twice a week and do occasional workouts in the pool. I have soccer most nights so I get some extra conditioning in there.

How have your coaches influenced you overall?

My coaches have really pushed me to put 100% effort in all that I do. Sometimes they can be hard on me, but I know its because they believe in me and want me to have success this year.

I want to give a shout-out to my teammate Sarah Ziemba. She is an amazing runner and a great friend. She’s going to have a killer season. Good Luck Blossom! :)

Bagel with strawberry cream cheese and a gatorade

Kind of shoes you train in?


We Can’t Stop by Miley Cyrus

What time of day do you run?

2 in the afternoon for after school practices

"The best pace is a suicide pace, and today looks like a good day to die." –Prefontaine