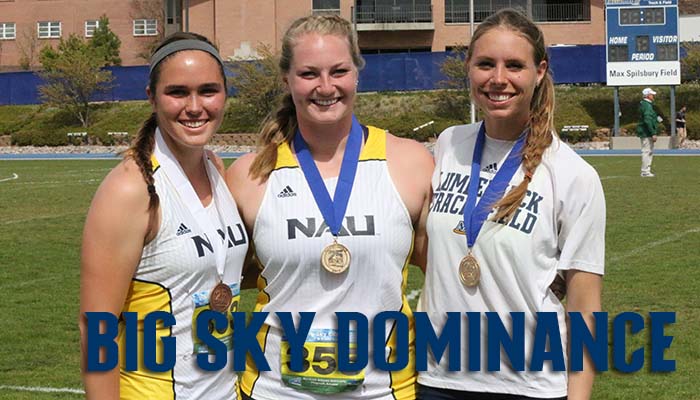 FLAGSTAFF, Ariz. – Northern Arizona University’s track & field team completed day three of competition at the Big Sky Outdoor Championship. The Lumberjacks had a fantastic day garnering four individual titles on the day. Going into the final day, the NAU men are in second place with 45 points and the NAU women in first place place with 71 points.

“I think our women had a great first day. In track & field you’re going to have good days and bad days. Overall we had a lot more positives than we had negatives especially on the women’s side. We had a good amount of athletes make it to the finals so it puts us in a good position to win.” said director of track & field and cross country Eric Heins. “On the men’s side I think we are doing what we can, but I expect Montana State to come out tomorrow and put up a fight to win this thing. With that being said our guys will have to be ready to fight to the last 4x400.”

Lauren Laszczak opened up the day for NAU in the women’s high jump. She cleared a best of 5-08 (1.73m) on her third and final attempt to solidify a first place finish and 10 points for the Lumberjack women. Laszczak has won the past three women’s high jump Big Sky titles dating back to the 2013 outdoor championships.

“It feels really good to take the win,” said Laszczak. “I wasn’t completely satisfied with my performance because I knew I could have gone higher.”

NAU dominated the women’s hammer throw as Lauren Stuart added another gold medal to her resume with a title in the hammer throw, as she beat out rival Kayla Kovar of Southern Utah. Stuart threw a season-best mark of 208-07 (63.57m) adding another 10 points to the Lumberjack women’s point total. Brooke Anderson placed third in the event with a mark of 194-09 (59.37m), followed by an eighth place mark of 178-07 (54.44m) from Jessica Weise to give NAU 17 points in the event.

“It was really exciting,” said Stuart. “This is my last year and I wanted to win at home so this means the world to me.”

Adding another medal to NAU’s total was Julia Viberg as she bested her competition by eight feet to win the women’s discus. Viberg registered a distance of 51.93m (170-04) to successfully defend her outdoor crown.

NAU completed a one-two finish in the men’s 3,000-meter steeplechase, as Caleb Hoover took the race in 9:20.65. Cody Reed was .05 seconds behind Hoover with a time of 9:20.70. The Lumberjacks’ snapped a five-year win streak by Weber State in the event.

“This first race was a big one for us because we needed to go out there and show that we were going to win this meet,” said Hoover. “We took control of the race from the beginning and started to drop people. I did most of the pacing so we both could feel pretty fresh. That was the plan."

NAU scored additional points in the women’s 3,000-meter steeplechase, when Lauren Justus placed seventh with a time of 11:26.51.

“It was nice to come out here and win and I felt really good,” said McElroy. “With two miles to go I noticed that everyone was starting to slow down. I made my move with 800 (meters) to go and I closed with a 67 and 65 and I put it away.”

The Lumberjacks dominance in the 10,000 meters carried over to the women’s race, as NAU had four athletes score as well. Rolonda Jumbo led the way with a silver medalist performance of 37:19.56 to close the night. Also adding points was an inspired Kylee Kieser (38:17.65) in fourth, Paige Gilchrist (38:47.88) in fifth and Kayla Freeman (39:05.9) rounding out the scoring in eighth.

Vernon Jamison and Deante Kemper both qualified for tomorrow’s finals in the 110-meter hurdles. Jamison recorded the top time of the day with 14.02, while Kemp ran a time of 14.63 for the fifth fastest qualifying time.

In the men’s 400 meters, both Taylor Schneider (47.59) and DeShon Norris (47.70) both qualified for tomorrows finals after they recorded the fourth and seventh fastest times in the preliminaries.

The 200 meters saw Cameron Coleman clock a personal-best time of 21.70 to advance to the finals on the men’s side, while Taylor Schneider added a lifetime-best 21.94 in the event.

The Lumberjacks will continue competition in the Big Sky Outdoor Track Championship tomorrow, as the men and women look to sweep both titles for the first time since 2009.

The field events begin at 10 a.m., with the track events set to start at noon.