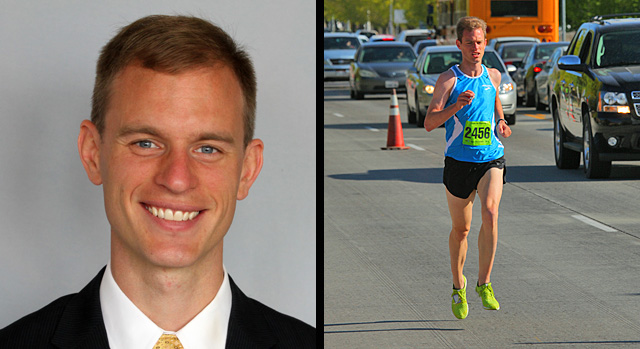 With the changing of the year, the responsibilities for the day-to-day operations of Arizona MileSplit are changing as well. Please welcome Rob Versaw as your new content manager!

Despite only starting track in 6th grade, Rob quickly immersed himself in every aspect of the sport, including reading books by Daniels, Lydiard, and Coe before and during high school. Going to high school in the pre-Milesplit era, however, meant finding scouring for results in a variety of local newspapers. He and his father waged friendly battles for first crack at the sports page of the Denver newspaper on Sunday morning to see what marks had been posted at various meets around the state.

Rob ran high school track and field/cross country at The Classical Academy in Colorado Springs and ran the opening leg on two state champion 4x800 teams his junior and senior years. By high school, he had narrowed down his events to distances ranging from 400 to 1600 meters. His experiments with the high jump in club meets during his middle school years were never highly successful.

Rob would later run a few seasons of track and field in college at the DII level. He eventually transferred to Brigham Young University and completed his degree with a B.S. in Statistical Science. Along the way he enjoyed the opportunity of training with All-Americans Kyle Perry, Josh McAdams, and a small handful of other post-collegiates in the Provo area. He is currently nearing completion of a master's degree in Systems Engineering from George Washington University.

Rob works at Palo Verde Nuclear Generating Station, but makes consistent effort to stay connected with the running world. He has written articles and compiled results for the Utah and Colorado MileSplit sites and was part of the MileSplit coverage team at NXR-SW and Foot Locker West this fall.

Rob's hobbies include hiking and economics. He was happy to trade the winters of Colorado and Utah for the heat of Arizona.