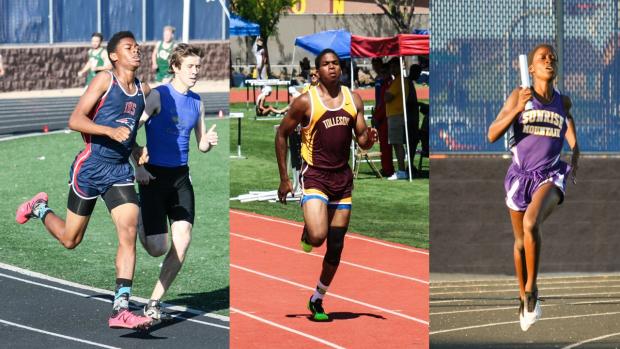 Alex Poe (c), Isaih Fuel(l) and Ukeme Ekpoh (r) have put distance on the competition all season, will they be able to do the same at the state meet? Arizona Milesplit Photo.

Alexis Center (sprints): Alexis is not only the fastest sprinter in Arizona but one of the fastest sprinters in the entire nation. She has a bright future ahead of her. While you always have to run the race to see who wins, she is about as prohibitive of favorite in the 100 as you get in track and field. Look for her to be racing the clock and the clock alone. She has been working on her closing 10m-20m. If she can finish strong she might just put down a time that will get her invited to elite post season meets. Stay tuned, and don't blink, you might miss her race entirely.

Bridgette Doucet (distance): Arizona fans know Bridgette as the girl that stays at the finish line and congratulates every last competitor she runs against. It will truly be sad to see her run her final race in a prep singlet. Bridgette has been a model of sportsmanship over the past few years. She has also been a model of how to win races. Her determination and work ethic have already earned her top finishes in both cross country and track. Look for her to go out with one or two more titles in the distance events.

Jessica Shinkle (shot put): The Raymond S. Kellis senior looks to go out with a bang in the shot. She is the defending division 2 state champ. She will look not only to defend her title, but seek to regain the best throw in the state. Look for her pay to attention to what Chandler Corneisha Mitchell does. While she is not as dominant in the discus she should have a shot for a podium finish, no pun intended.

Trey Johnson (110, LJ, 100): Trey Johnson is a very talented athlete. He is what some call "crazy talented." The craziest thing about Trey is that he is only a sophomore. Having made the evening session at the Chandler Rotary he seems to be a big part of the future of Arizona track. Owning top 4 marks in the long jump, 110H and 100m he will put up some big points at the state meet. Tolleson's title hopes are heavily reliant on his ability to perform, but that shouldn't stress Trey. He has handled that responsibility admirably all season.

Turner Washington (discus): You think Trey Johnson is crazy gifted? Well he is but you should also check out Turner Washington. This Canyon Del Oro sophomore leads the state in the discus throw. In fact he hasn't lost a discus competition since last year's state meet. That, my friends, is what you call impressive. Turner will not be competing against the other throwers at the meet but against the record books. Can he crack the top 5 all time in Arizona? I don't know, it's a long shot this year, but certainly plausible.

Ukeme Ekpoh vs Sasha Jarrett (400m): Courtnee Oglesby is the defending state champion in this event. So far this season her performances seem to indicate she is somewhat of a long shot. With that being said, don't rule her out. It just looks like Ukeme Ekpoh and Sasha Jarrett are the favorites to win If you just look at their PR's Sasha looks like the clear favorite however if you dig down some, one will realize the Ukeme beat Sasha in the 400m at the Peoria District meet recently. Sasha also has yet to PR on the year in the 400m. She will want to go out on top and hopefully with a PR. Ukeme would love to snag another upset and win the state title. Whose will-to is stronger? Well, there is nothing quite like a grueling 400m to settle a battle of will.

Verrado vs Gila Ridge vs Flagstaff vs Queen Creek vs Catalina Foothills (Girls 4x800m): You are probably thinking, "Why on earth are there 5 teams!?!?" Well, let's just say it's just one of those races I would not want to bet on. All five quartets have a reasonable shot of taking the race. I think one has to consider Verrado the slight favorite. They have the fastest time and the smallest spread from their first to fourth runner. This will mean they will likely pull ahead on legs 2 and 3. It doesn't hurt that their 2nd and 3rd runners (Courtney Pansza and Caroline Jenson) are both seniors. Gila Ridge has the fastest anchor leg in Clara Haynes. Having clocked a 2:19 already the rest of the field will want to put some daylight on Hawks before the final exchange. Catalina Foothills are the defending champions. Even though they lost 3 of the legs from last season, they will be a force to be reckoned with. If you have any doubt, freshman Richelle Sandin was Catalina's top girl on their state champion cross country team last fall before she got sick. Yeah, I'd say they reloaded. Before Catalina won last fall, Flagstaff had a habit of doing well in cross country. Have we seen their best yet? Doubtful. It's just tough to run at altitude. From reading the results it looks like the qualified and that's about it. Their times stand to drop more than most by running in Mesa. I don't know much about Queen Creek, nor do my sources. This regulates Queen Creek to the role of dark horse. They put up a very strong 10:09 way back in March at the Basha Relays, but I haven't been given results for them running a 4x800m since. Was this a onetime wonder or will they be back to compete? Who knows? Most 4x800m teams get much faster throughout the season, if they could run 10:09 that long ago and no one has gotten hurt they should be up there with the other teams competing for the state title.

Jullian Clark vs Alex Poe (200m): These are two of the fastest sprinters in the state irregardless of division. Jullian has had the upper hand in short races, only losing to one in state athlete over 100m or 200m dashes this season. One cool feature Arizona Milesplit has is the ability to compare athletes (both in state and out of state). Check out this screen shot of the comparison of these two athletes. If you want to be able to compare athlete click right here. 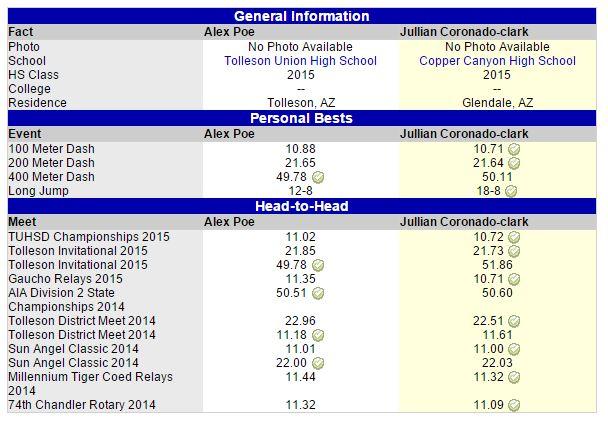 Isaih Fiel vs Simon Paige vs Ryan Lanley (800m): Believe it or not until last week all three of these boys had a faster time than anyone in division 1. (Highland's Logan Jones beat out Ryan's time by a couple tenths). With all three of these runners also clocking times within a half a second of each other, this race should be very close. Simon Paige, who is a more definitive favorite in the 1600 and 3200, seems to have the best endurance of the group. Look for him or Ryan to try and set a fast pace early. Isaih Fuel rarely likes to take the lead, instead he prefers to rely on his devastating kick. If Isaih is close coming out of the final turn he will be very hard to beat. If Simon or Ryan can run his kick out of him either one of them has the ability to pull out a "W."