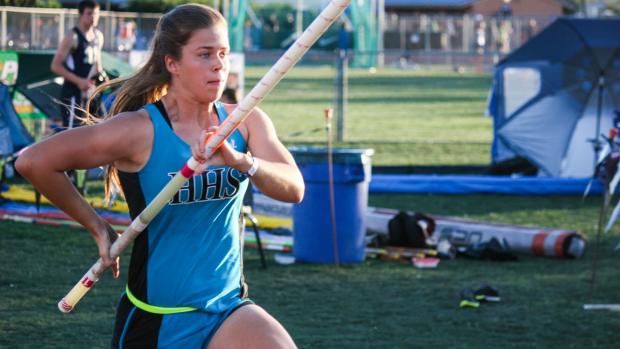 On Wednesday, May 6, the division 1 state championship kicked off at Mesa Community College just outside Phoenix. It was hot, but relatively nice for this time of year in Arizona. The cloud cover and strong winds out of the south provided some respite from the heat, but created a substantial head wind for the sprinting events.

The meet got underway at 1:00pm with two flights in the boys long jump and girls shot put. Nine athletes qualified for the finals which took place right afterwards. In the boys long jump, Lawrence Wallace (Tucson), had a huge third jump in his flight as he leapt to a mark of 25'1.75", which would hold up as the best mark of the day to make him the state champion. Robert Brooks (Brophy) jumped 23'6.75 for the silver and Robert Kincade (Maryvale) broke the sand at a distance of 23'2.25" to take the bronze. In the girls shot put, Corneisha Mitchell established herself as the one to beat on her first throw of the day as she launched the cast iron ball over 39 feet. She would later better that mark with a throw of 43 feet 3 and ¾ of an inch to win the gold. The Mountain Pointe girls rose to the occasion as Onnika Scott threw 37'9.50" and Kayleigh Conlon threw 37'7.75" to take 2nd and 3rd, respectively and score some valuable points for their team.

The first event on the oval didn't go off until 3pm when the hurdlers took to the track. On the boys side, the biggest surprise came from William Winfield (Chandler) as he ran a very smooth 14.18 and the two favorites heading into the meet, Isaiah Oliver (Brophy) and Cory Anderson (Skyline) ran 14.47 and 14.55. It should be a great three way battle in the finals. In the girls prelims, Arniesha Mitchell (Chandler) led the way at 14.60 while China Simmons (Millenium) wasn't far behind at 14.70. Two Chandler girls and two Mountain Pointe girls both made finals where they can pick up important points in the battle for the team title. Next up was the boys 4x800m relay where Desert Vista and Highland had to be looked at as favorites heading into the meet. The race didn't disappoint, as Desert Vista set a strong early pace and were looking strong up front. The team from Highland stayed close though and got a great anchor leg from Zach Harrach, which proved to be too much for the Thunder as the Hawks were victorious with a time of 7:54.71. Desert Vista was second in 7:59.67, and Liberty 3rd in 8:00.73.

In the girls 1600m, state record holder, Dani Jones (Desert Vista), would look to bring home another state title and pick up big points for Desert Vista with her Thunder teammates. Jones took the lead early after a slow first 200m and would never look back. The pack came through 800m in around 2:32 with almost everyone still in contention for 2nd place. They stayed pretty tight through most of the third quarter until the jostled for position and started making moves heading into the bell lap. Baylee Jones (Desert Vista) and Ali Kallner (Chaparral) broke away from the group and actually gained on the older Jones in the final 200m. Ultimately, Baylee was able to hold off Kallner down the final straight to take 2nd in 4:58.88 as Kelly Naumann (Corona) ran a strong race to finish 4th. The winning time was 4:55.02. With a 1-2 finish from the Jones sisters, Desert Vista picked up a valuable 18 points in the team race, but were probably hoping for more based on the pre meet rankings.

The 100m dash didn't see any blazing times as all the athletes were running into a head wind that got very strong; the boys saw wind readings as high as -5.5m/s. Isaiah Ford (Desert Vista), leads the way into Saturday with a 10.89 seconds. A few of the top contenders leading into the meet did not advance to the finals, so the door will be wide open for a new state champion. In the girls prelims, Nastasia Peevy (Chandler) put up the fastest time of the day at 12.21 seconds. All the big names made it through to Saturday. In the 4x100m, the boys saw 5 times run between 42.34 and 42.63 with Mountain Pointe leading the way. The finals should be a great battle up front and will likely come down to who has the best passes on that day. On the girls side, the biggest news came from the clear favorite, Chandler Wolves, as they dropped the baton in the final exchange and won't advance to the finals on Saturday. The miscue will cost them precious points in the team competition. The Mountain Pointe girls ran their fastest time of the season of 47.25 seconds and will be the team to beat in the finals. In the 400m dash, Tavian Ross (Tucson) and Maj Williams (Horizon) were the only athletes under 49 seconds, so they will be the top seeds for Saturday. While on the girls side, the “big three" of Alena Ellsworth, Jasmine Stauffacher-Gray, and Anna Foreman all advanced easily to set up a great race in the finals.

In the meantime, there were also a few more finals going on in the field events. The boys high jump was won by Sam Shoultz (Corona) at 6'10" while 2nd and 3rd went to Quinton Anzalone (Tucson) and Andrew Okonkwo (Chandler), respectively, who both jumped 6'6". The Mountain Pointe girls secured a 1-2 finish in the triple jump with Tria Seawater-Simmons leaping all the way out past 40 feet, at 40'4.50". Chyna Simmons took the silver while Tiana Poirier-Shelton (Chandler) took the bronze. In the boys discus, Desert Vista had an impressive showing as they went 1-3-6-7 to pick up huge points for their team. Elijah Mason had a monster throw of 172 feet 2 inches for the gold, Dru Dixon (Pinnacle) threw 167 feet 1 inch for silver and Torrey Hickel won bronze with a throw of 167 feet. The girls pole vault lived up to the hype as seniors Nicki Baker (Highland) and Vanessa Davis (Desert Vista) went jump for jump the whole competition. When one would clear a height, so would the other, when one missed, so did the other. They were even until 12'9" when Baker soared over on her second attempt. Davis went to her third and final attempt, but was unable to clear the height giving Baker the gold. The bronze went to Aliya Simpson, also of Desert Vista.

There weren't any surprises in the 300mh as everyone advanced who was expected to so both finals should be great to watch. In the girls 800m finals, Dani Jones again assumed the lead and went gun to tape in an excellent time of 2:09.15. Alena Ellsworth (Highland), ran a very smart race and moved up over the last 300m to take 2nd in a huge personal best of 2:12.54. 3rd went to Drianna Mustin (North Canyon) in 2:15.20. The rest of the Desert Vista contingent came 6-7-8, led by Baylee Jones in a time of 2:17.88. The 200m, again, didn't see many fast times due to the wind, but Nastasia Peevy (Chandler) had the most impressive run, clocking a 24.80 into a -5-5m/s wind. She will be tough to beat.

In the boys 3200m final, they started off at a somewhat pedestrian pace with no one looking to be the pace setter for everyone else, but the pace picked up in the middle laps when Seamus White (Hamilton), as he's accustomed to doing, took the lead. He held it until the final 500m when Jacob Toller (Mountain View) and Tyler Day (Mesquite) took over and had a great duel for 300m before Day was able to pull away in the final hundred and cross the line in first with a time of 9:28.02. Toller ran 9:29.82 for second and Joe Schaaf (Buena) took third in 9:31.10.

The 4x400m prelims were uneventful with most of the top teams just content to run whatever was necessary to make it through to the next round. The finals will take place on Saturday afternoon at the Mesa Community College track and field facility. It should be exciting as the team and individual battles heat up!