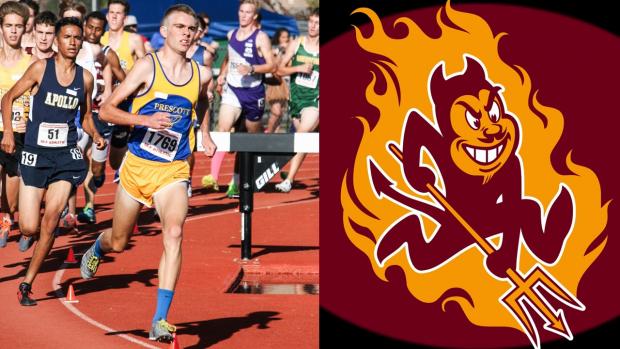 What was behind the choice to go to ASU?

I think the main factor behind my choice was the distinction of the coaching staff, as well as the proximity to home. Coach Quintana has a strong tradition of great milers at ASU and has been "around the block" so to say during his time as an athlete at Villanova. Additionally, Jeremy Rasmussen had great success while coaching the women's distance team while at the University of Illinois. I feel very confident in the level of training that I will be doing at ASU. Tempe is a nice location because it is only a 1.5 hour drive back to Prescott, so it will be easy to get back home if there is a need.

You had great success at a variety of distances this spring, which was your favorite? Why?

Out of the distances I raced in this spring, my favorite was definitely the 1600. While I only raced at the Chandler Rotary and State, they were both easily my most enjoyable races this season. I feel like it is my sweet spot between the 800 and 3200, so I was most comfortable at that distance. I would have liked to run it more during the season, but it was tough to find a race where I could run fresh and go for a really fast time due to the heavy racing schedule with dual meets.

Have you had any discussions with the coaching staff what event(s) you want to specialize in college?

I haven't had any specific conversations with the coaching staff yet, so what I will run remains to be said. Personally, I would really like to get my mile/ 1500 time down and maybe throw some 800 races in there!

What was your favorite workout you did during high school?

That's a tough one, but my favorite workout had to be 4x(4x400) that I did with my teammates sophomore year! It was in late January, so it was pretty cold. There was a soccer game going on at the same time and they had to leave the stadium lights on after they were finished because we sure weren't. We all went home really tired but it was an exhilarating feeling completing such a workout, especially at my young age as a sophomore.

Who is your hero and how have they inspired you?

My hero isn't one specific person. There are many people who are and have been in my life that inspire me and push me to work towards my goals and aspirations everyday. I am blessed to have great friends and family that believe in me and want to see me succeed.