Name: Trevor Tam
School: Horizon Honors
Trevor Tam graduates as the Division IV leader in all three distance events, first running 4:27.43 in the Boys 1600m at the Bourgade Catholic Invitational, for a landslide victory. He would follow up with another run of 4:27 a week later at the Chandler Rotary Invitational. At the Sun Angel Classic, he took 6th in the 800m in a time of 1:58.39. Just prior to the State Championships, Tam finished 2nd in the 3200m running 9:45.86 at the Desert Vista Last Chance Meet. Trevor finished his high school career by sweeping the Division IV distance race titles at the State Meet (just in time to rush over to his prom that night).
What was your most memorable race?
My most memorable moment would have to be falling during the state race for the 1600m, but getting back up and getting the win. When I fell, I thought my chance at the triple crown was over, but I wasn't about to quit. Coming back like that made the win even sweeter and more memorable.
Who would you consider your biggest competition over your four years?
I would say my biggest competition, or at least favorite person to race against, was Chase Chittester. It went back to cross country, too. We were always out there racing and trading wins back and forth. He would get me in cross country more often, even beating me at sectionals my junior year. It only made me want to train harder, though. He's a great guy and always fun to race against.
What was your greatest accomplishment? 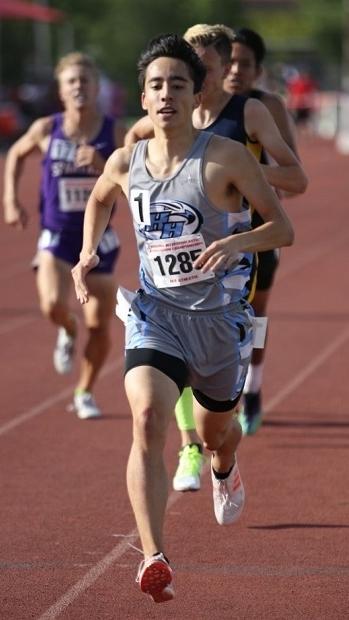 My greatest accomplishment was definitely winning the 800, 1600, and 3200 at state to cap off my career of high school track.   (Trevor wins the D4 Boys 1600m.-photo by John Hays)
If you could do it all over again what would you change about your running career in high school?
I would start doing more strength training earlier. It could have prevented injury and made me a better runner. All in all, I'm still very satisfied with my running career.
What were the most difficult obstacles you had to overcome?
The most difficult obstacle I had to overcome was when I got a stress fracture during the summer between my junior and senior year. I wanted to have a big senior year, so I was training really hard, but in the end, it just set me back by being out for six weeks.
What will you miss the most?
I'll miss the running community the most. You really get to know the guys you're running against and it's just a fun environment full of people with the same drive and same goals as you.
What advice would you give to younger athletes?
I would say to set ambitious goals and train like crazy to reach them. As long as you're training to the best of your ability and leaving nothing on the track you can reach them.
What influence has your coach had with respect to your performance and overall life goals?
My coach has had many positive impacts on my performance, and has instilled a drive within me to be good at whatever I do and to go after my goals without hesitation and not give up.
What are your college plans? (Will you run for your school? Have you decided on a major?)
For college, I will be going to UCSD and am undecided on whether or not I will further pursue track. My major will be in bioengineering.
Who do you have to thank for your success in high school?
I have my coach David Allison to thank for my success. I started training with him after track during my freshman year and I immediately noticed a difference, shaving 25 seconds off my mile in a year. He pushed me hard, taught me many important values, and most of all was a great guy and mentor.
Varsity Boys 4x400 Relay Finals Section 2 Tates Creek Commodore Classic (MEET IS FULL) Apr 13, 2021
Varsity Girls 100 Hurdles Finals Section 2 Tates Creek Commodore Classic (MEET IS FULL) Apr 13, 2021
Boys 4x400 Relay Finals Section 1 FEAST HS Invitational Apr 13, 2021
Girls 4x400 Relay Finals Section 1 FEAST HS Invitational Apr 13, 2021
JV Boys 4x400 Relay Finals Section 1 FEAST HS Invitational Apr 13, 2021
JV Girls 4x400 Relay Finals Section 1 FEAST HS Invitational Apr 13, 2021
Tweets by MileSplitAZ