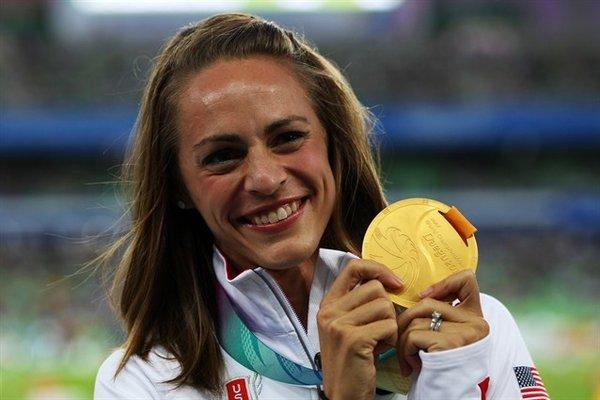 Jenny Simpson is a household name in American distance running right now for both her racing prowess and her positive personality during interviews. And, it doesn't hurt that she has a 1500 PR of 3:58.28 at famed Prefontaine Classic. Having prepped in Florida, she relocated to the beautiful Rocky Mountain region to compete collegiately at the University of Colorado where she won numerous All-American certificates and multiple national championships. Following her collegiate career, she shocked the track and field world by her 2011 World Championships title in the 1500m. During the 2013 season she proved once again she belonged among the world elite by earning a silver medal at the World Track and Field Championships, and currently leads the world in the 1500m. Due to a fortuitous run in while Jenny was flying to Phoenix, Arizona Milesplit was able to chat with New Balance all star. (Images owned by Flotrack)

Arizona Milesplit: From winning NCAA’s early on in your career, to setting NCAA records, to even becoming the world champion in 2011 are all certainly things few people have achieved. How have you stayed focused and not let the accolades distract you from the next step?

Jenny Simpson: Hidden in the comments of "just have fun" and "do what you love" is the secret that if you do truly learn how to love and have fun doing something you're good at, the motivation doesn't wane after reaching a huge goal. If anything, reaching new levels in the sport always feeds my desire to continue to focus and train harder to see how good I can truly be. Now, that doesn't mean there are days I'm not excited to get out the door and get my run in, or that there aren't races that I'm nervous about. But, those tough days, so far, have been a small price to pay for the so many wonderful days.

JS: I think it's important to keep things in perspective. One race, best or worst, never has to define your entire career. We are all imperfect people and recognizing that I'm not a machine that dials in an effort and races gives me the latitude to accept that sometimes I'm not going to get it right and I'll have a bad day. Also, it's also those low points that contribute to understanding how special the peaks are. I wouldn't have it any other way.

AZ-MS: Recently you changed back to Coach Wetmore after a few years hiatus, how did you stay in rhythm with the move?

JS: It wasn't easy to keep a simple schedule when I lived 90 minutes from where I was training. But I'm surrounded by great people both in Colorado Springs and in Boulder. Everyone was very flexible and worked hard to make my schedule work and reduce my commuting. It wasn't an easy time but it went as smoothly as it could have. We sold our former house the day I won in Monaco and are now 100% relocated to Boulder.

AZ-MS: Can you explain how your rivalry with Sally Kipyego helped you in college? How did you stay focused after she graduated?

JS: Sally was such an incredible challenge for me in college. I sincerely feel so fortunate that she and I overlapped for so long even though it meant me getting my butt kicked for three years! Sally is an incredible talent and also one of the toughest racers I have ever known. She was way ahead of me early on in college and I saw it as an opportunity to have something to work toward. And I did work, for three long years, and finally beat her for the first time in our very last competition against one another in college. How crazy is that? I have a huge respect for her because she's kind, talented, and so tough! I'm grateful to her because she was a huge challenge to race in college and I know that made me better every single season.

AZ MS: What role have teammates played in helping you stay focused through your ups and downs?

JS: It's always easier to lace up your shoes for a run when you know you're meeting someone. It's also more fun to go to races when you know you have people in your corner. Teammates have always served as my closest friends and my greatest encouragement. When you work really hard together day after day at practice, they can validate you when you have doubts and celebrate with you when you succeed. Truly close teammates is a special bond and one of the greatest rewards in sport.