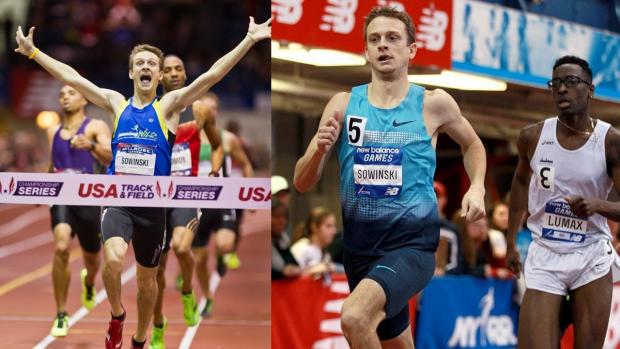 Erik Sowinski was a five-time first team All-American at the University of Iowa. In 2011, he placed 4th at the NCAA indoor championships in the 800 meters. In 2012, he placed 3rd indoors and 2nd outdoors. He has a personal best of 1:45.90 and was a competitor in the Olympic Trials. While Erik had a lot of success in college, it took some effort to get an endorsement deal done for him. That did not stopped Erik however from continuing to chase his dream. On February 16 2013, Erik ran at the Millrose Games in the 600m and took down Olympians Duane Solomon and Nick Symmonds and broke the American Record by running a 1:15.61. On Sunday, March 3 2013, he took another big step in his career by winning the 800m at the USA Indoor Championships. In 2014 he repeated as national champion, in 2015 he contributed to a world DMR record and now has his eyes set on the 2016 Olympic team for Rio. We talked with Erik and he gave us valuable insight into never giving up on your dream and always believing in what you know you can accomplish.

You had relative success throughout college before really having a breakout senior season. Did you always believe you could do what you did?

It was definitely a journey throughout the years. At times I had my doubts, but I think every runner goes through those moments of uncertainty. After seeing my progression yearly throughout high school and college I was confident that I had a breakout race in me, it was just a matter of putting all the pieces of the puzzle together. Having such a supportive group of teammates, coaches, friends, and most importantly family made the journey that much more fulfilling. Being able to experience the ups and downs with so many people backing you has been incredible.

Were there times you doubted if you would get to that level?

Up until about halfway through outdoor season my senior year of high school I was set on competing at a Division III school back home. I had been successful on the track, but not the extent I needed in order to be considered for a Division 1 program. After a few good performances at outdoor conference my senior year I started getting looked at by some Division 1 schools and that's the moment when I realized that I had what it took to compete at the next level.

But becoming an elite Division 1 athlete is a monster of its own. The transition to college athletics and academics had me doubting my abilities to succeed on both levels at times. However, the relationships I developed with the coaches and support staff helped me through that transition and gave me confidence knowing that I had all the tools necessary to succeed at that level. I put in a lot of hard work, don't get me wrong, but really buying into the training and taking in the advice from those around you goes a long way.

How can athletes stay motivated when they are performing well in their freshman, sophomore and junior seasons, but maybe aren't having success at the highest level yet?

Whenever I was struggling and lacking motivation I remembered why I was doing the things I was. I love the sport of track and field, I love competing, and I got to be a part of something bigger than myself. That was all I needed to get myself back on track. Not many people get to say they are an NCAA student-athlete, embrace the opportunity. It's not always about the times you run, you need to enjoy what you're doing in order to succeed. I like the quote "Keep your head and your heart in the right direction and you'll never have to worry about your feet," it really sums everything up for me.

Even after you set the American record in the 600 Nike didn't pick you up for an endorsement, how was that?

I was without any endorsement deal. I struggled at times with motivation, I'll be the first to admit that. Working 30 hours a week and trying to train at an elite level takes its tolls on you, but like I said before, you need to remember why you're doing what you are. At times it's hard to make ends meet, but the love for the sport and competition along with the support of all those I have around me really fuels the fire. I was confident that if I kept taking steps in the right direction that everything will fall into place, all I needed to do is keep working hard and good things would happen. They did, and now I am a proud member of Nike.