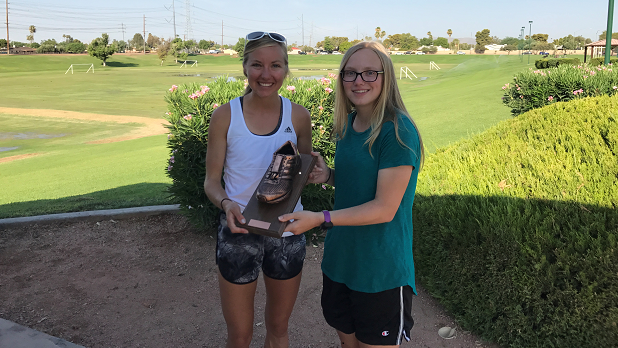 The LaceLocker Bronze Shoe Award is to be presented annually to a selected runner who has displayed flawless work ethic and persevered in pursuit of a goal. Spence Gracey, who currently trains in Colorado, has partnered with one of her sponsors, LaceLocker, to create this award and recognize hard-working athletes around the country. "The vulnerable moment when we share a goal, the grit and grime we endure to train for it, the perseverance when things don't go according to plan, the hours we push through when we don't want to, and the sweet victory when we conquer the mountain, smile at the peak, and the mind starts planning the next one!" Gracey declares as the guidelines for the award.

In his nomination, Coach Ouellette detailed Kelsey's display of perseverance from her first days of practice in middle school. "There were many times in the first two weeks I thought it was likely to be Kelsey's last day. But Kelsey never quit, even though she said many times she wanted to," said Coach Ouellette. According to Dean, Kelsey is now the 3rd best runner on the Chandler Prep Titans. She has gone from running 1600 meters in 8 minutes to running 5k in 22:30 and plays a vital role for what has been the best cross-country team in school history.