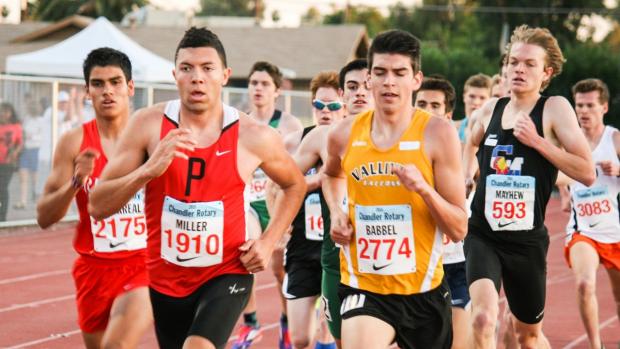 The mile is arguably the most notable event in track and field. If you claim to be a runner after high school, people will inevitably ask you what your mile time is. Fact is high schoolers don't race miles, they race 1600m. The different is about 9m or a couple seconds. In some senses the 1600 is a middle ground between the 800 and 3200. In other respects, the 1600 is its own animal, different from either the 800 or the 3200.

The dissimilarities with the 800 begin the instant the gun goes off. The first turn and first back straight of the 800 are crucial for positioning. That kind of urgency simply isn't present in early stages the 1600. You can "lay back" early in the race much more safely than you can in the 800. The biggest thing is not falling too far back and being out of contention later on.

At the high school level (there is no 1600 at higher levels, but the 1500 provides some useful comparisons), the first lap tends to be run faster than the overall pace of the race in both boys and girls competitions. The first lap is most often the fastest lap in a high school race, though not necessarily the most difficult. Typically the quickest lap is either the second or final lap, with the third lap almost always being the slowest. At collegiate and higher levels of racing, lap times tend to converge much more toward a mean value.

Generally speaking, boy's races typically have a well-defined leader early on, however in most girls races you tend to see leadership by committee. This trend only holds true when the runners are roughly the same level. When you have a star athlete like Dani Jones or Katie Rainsburger in the race it is typical to see them go to the front and stay there without every really being contested. Tactical high school 1600s are rare unless there are multiple dominant runners competing in the same race.

The first lap is largely about staying in contact with the lead group and settling into a pace, often times this tactic encourages many athletes to go out too fast. Most high school runners struggle some with learning their most efficient first-lap pace. Until someone makes an art of running 20 meters off the lead on the first lap and then coming back and winning races, things are likely to stay that way.

Even at large meets getting boxed in is rarely a problem in the 1600m. The race almost always strings out much faster than an 800m. In most 1600s, you see relatively little jostling for position on the opening lap, though more than a 3200. Clipping does occasionally happen and contestant will be called back if it occurs in the first 100m of a race.

Most runners have settles into a rhythm by 200m and by 400m their pace often has slowed to about what it should be. First lap times are weird since they often appear fast due to the first 200m. It wasn't until college that I learned not to be alarmed and adjust pace since most of the "ahead of schedule" time is due to the first 200m.

The second lap tends to be run at roughly the same pace as the latter part of the first lap. It's still too early for most runners to make big moves and the serious fatigue that comes with almost all 1600 meter efforts hasn't yet settled in. Most of the passing you see on the second lap of a 1600 is a result of runners who took it out too hard on the opening lap losing the strength, the courage, or both to sustain that pace through the second lap.

Somewhere on the third lap, the positioning of the race starts to get serious even as, paradoxically, the pace lags a little. Burning fatigue is starting to settle into the racers' legs, and force of will is now required to stay with the lead group. This is where the wheat starts to separate from the chaff, and passing becomes more frequent as runners tend to sort themselves out. Almost without exception the field is strung out. If someone is not keeping up on the turns it is important to pass. It is too early to kick but slowing down can make gaps tough to make up at this stage.

Athletes normally start to kick with about 500m-300m reaming in the race. Occasionally you will see an athlete wait until the last 150m or so to turn on the afterburners. The final lap will, in many cases, be the fastest lap of the race, at least for seasoned runners. It's not uncommon to see laps under 60 (boys) seconds or 70 (girls) seconds even at the high school level. The fastest times are almost always clocked when there is visible uncertainty over who will end up winning the race. Sustaining those kind of paces at the front when there is no visible threat for the lead requires a good deal more in the way of psychological investment. After the 800m the 1600m probably has the most athletes collapse at the end due to difficult combinations of strength, endurance and speed. This is often why the best times are achieved later in the season, weather permitting.

Editor's Note: I am hoping to make this into a series. I do not have the expertise to write about most events in track and field. If anyone (coaches, athletes, parents, officials, fans....anyone) is interested in writing quality articles about other track and field events I would be happy to post them. These articles will be unpaid, but it may help you score a paid position later on. I plan on writing articles on 4x400m, 4x800m, 400m, 1600m and probably the 3200m as time permits. As such, preference will be given to other events, though if someone does a bang up job on a distance event it will be published as well.