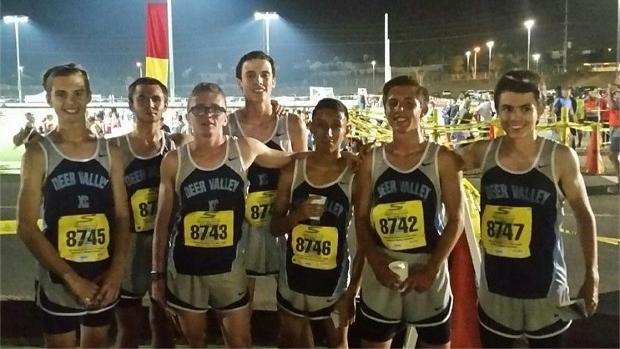 Deer Valley placed 7th in their race at the Woodbridge Classic last September.

The Deer Valley Skyhawks return four of their boys from last year's State Championship team. Logan Wall-Harris (Sr.) will be their top man this fall at the helm of a very young squad. Logan had a huge break-through in the D2 boys 3200m with a 9:46 performance for an 8th place finish. They also return now-seasoned sophomore Nick Olson, who broke 17-minutes for 5k in the fall and posted 4:30.08 for 1600m and 10:12.10 for 3200m during the spring. Xavier Rodriguez (So.) and Josh Paduganan (Sr.) are two more returners under 18-minutes for 5k from last year. Xavier is another developing runner with room to already under 5-minutes for 1600 meters. Though the Skyhawks placed 15th at the State Meet last November, they return as matured squad and ready to mix it up with the best of Division II.
Coach Zent Says… 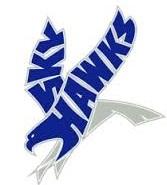 Who are your top returners?
Logan Wall Harris (12) -- state placer in 3200, Nick Olson (10) state qualifier in 1600 m, Xavier Rodriguez (10), Josh Paduganan (12). Four of our top seven runners from last year's state meet qualifying team return.
Do you have any impact freshman or incoming transfers?
Randy Espinoza, Jake Bruch, Matthew Kuczora
What meets are you keying in on this year?
Woodbridge XC Classic, Desert Twilight, District Meet, Sectional, State
How has your preseason training been going?
Preseason training was well attended by our boys' team. They were consistently at practice, working exceptionally hard and spending time doing the little things right, as well as training and lifting.
Have you set any goals as a team?
Daily improvement as athletes and students, culminating in a successful season with improved personal and team bests.