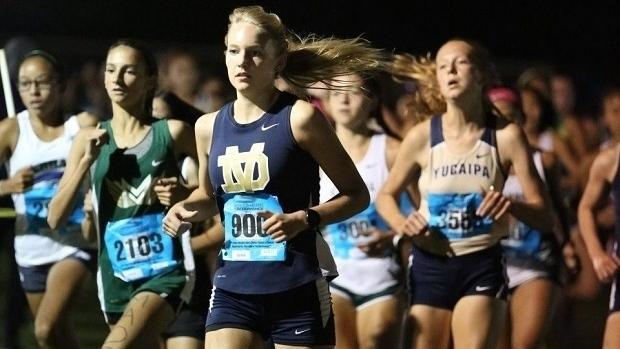 The Woodbridge Invitational argued by many to be the fastest meet in the country is set to take place Friday and Saturday evening at the SilverLakes Sports Complex in Norco, California. Over 300 teams and 13,000 athletes are entered to compete and the opportunity to compete against the best in the west is attractive to teams far and wide including several of our own.
On the Boys side, Desert Vista's Habs Cheney (Sr.) took 12th in the 2016 Sweepstakes Race with an impressive 14:32 performance, followed by teammates Chris D'Angelo (Grand Canyon, '21) and Reece Donihi (Sr.) in 14:50 and 14:51. Also returning with a sub-15 PR from last year's Sweepstakes Race is Perry Senior Anthony Haren. He's run 9:35 for 3200 and has the potential to be very competitive in any field. While the Campo Verde Boys did not race at last years' meet, they return after placing 10th in the Boys Varsity Gold A-Race two years ago this time hoping to mix up the Boys Sweepstakes Race. Their top guy Rylan Stubbs (Jr.) has 9:21 speed for 3200 and took 2nd at the Desert Solstice Invitational last week. Among Arizona boys who return outside of the Sweepstakes and Rated races, include the Gila Ridge Hawks, who return spearheaded by Seniors Christian Deboard and Cody Hartman. At last years' Sweepstakes Race, Deboard and Hartman clocked in respective performances of 15:17 and 15:39. The Hamilton Huskies have also made their way to Norco for their Woodbridge experience. Their ace David Nelsen (Sr.) entered the season as the top-returner from last year with a PR of 15:27 for 5k. He blew the doors wide open at Desert Solstice last week running 15:49. The Skyline Coyotes and the Deer Valley Skyhawks have also thrown their hat into the ring hoping to measure their best efforts. While the Desert Vista boys took 4th at last years' meet, the Lady Thunder edged out Great Oak in a huge upset of 49 to 65 for the Girls Sweepstakes title. Desert Vista have graduated four last years' top-seven, the return Haley Wolf (Sr.) who placed 5th last year clocking 16:41 as well as now-seasoned sophomore Brooklyn Christofis who took 15th in 16:51. Kelly Harris (Sr.) has stepped-up as a solid no. 3 and could potentially come dangerously close to the 17-minute mark for the Thunder. The Coconino Panthers also return, this time in the Girls Rated Race. Their top girl Woodlyn Smith (Jr.) ran 18:56 at last years' meet and already has a pair of top-5 finishes this season. Clara Haynes (Gila Ridge, Sr.) was ranked as the no. 8 returner for 5k at the start of the season and will run the Sweepstakes Race as an individual. Last November she took 2nd at the cross-country State Meet and definitely has what it takes to run in the mid-low 17 range. Returning D1 State Champ and Footlocker Finalist, Jesselyn Bries (Sandra Day O'Connor, Sr.) is also set to toe-the-line against some of California's best at SilverLakes and could place high enough to turn several heads.
Best wishes to everyone racing in California tonight and tomorrow.
Tweets by MileSplitAZ