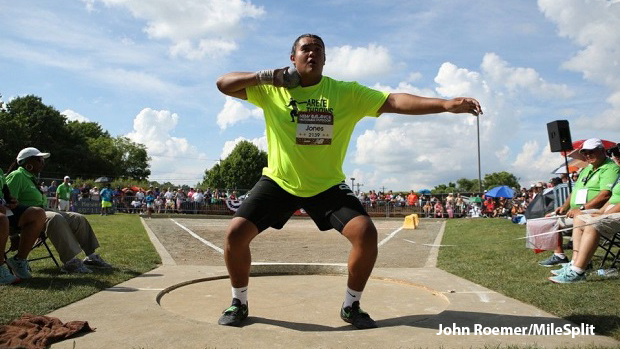 Name: Tyson Jones
High School: Desert Edge High School
Grade: Senior
Tyson Jones is a returning two-time Division II State Champion in the Shot Put. This past weekend, Tyson threw 69-07.25 for Shot Put to shatter the oldest track and field record in Arizona. Dallas Crutcher Long set the previous mark of 69-03 in 1958 for North High School in Phoenix before competing for USC and eventually earning gold in the 1964 Tokyo Olympic Games.
Where are you from and when did you begin throwing?
I was born and raised in Goodyear, Arizona. I started throwing in 4th or 5th grade and I was a lot skinnier, but I was really slow and I couldn't run or jump but I was good at the throws.
What was the first major breakthrough you remember experiencing at a track meet?
During my sophomore year, I threw 60 feet and fouled a 63 at the State Meet. But I never thought I'd break the State record.
Do you have a role model and what's the most valuable thing you've learned from them?
Honestly, no. I had favorite throwers like Christian Cantwell and Reese Hoffa, and I mostly tried to imitate what they did and morph my style based on them.
How is a typical week of training structured for you during the season? Do you balance throwing and lifting?
I'm in a weight-lifting class. And I have practice every other day with Arete Throws Nation in Phoenix. We rest in between throwing days.
Throws are such technical events and you've had so much success in the Shot Put. What do you enjoy about throwing Shot most?
It's intense and really fast. I'm excited to throw with the older guys.
You've committed to attend and compete for Virginia Tech in Blacksburg. What went into making that decision and what sort of things have you been discussing with your future coaches?
It was just the environment and I really bonded well with the team and the coach. Dubs got a sense of my technique and he said we shouldn't change much since I'm throwing really far with what I'm doing.
(Tyson signed with the Virginia Tech Hokies last November.) 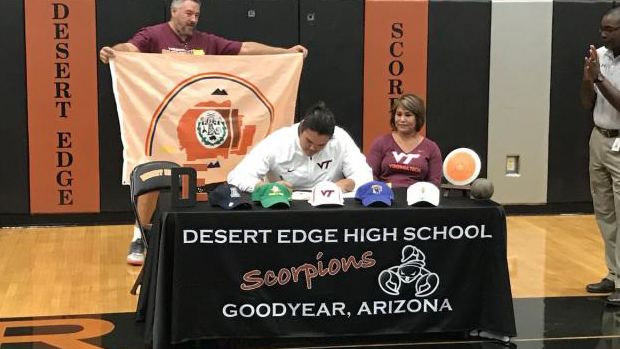 Andrew Dubs is the new throws Coach on the Hokies' roster with a lot of success in the Shot Put, as both a coach and a student-athlete. Did this influence your commitment?
He's (Dubs) had athletes at the Olympic level. We just really connected well the more we talked.
What interests you academically at Virginia Tech? Have you already decided on a major?
I'm gonna' try business, but I'm still kind of undecided. It's a big school with a lot of majors so one will fit.
What's something unique about you outside of throwing?
I like to fish. I picked up bass fishing 2-3 months ago. It's relaxing and really takes your mind off things.
You've already broken the State Record for Shot Put in your first meet and you even threw an indoor 69-7.5. What advice would you give to younger throwers aspiring to do the same?
You have to stay patient and trust the process. Focus on technique and the little things instead of trying to go for a big PR every single throw.
(Video of Tyson's record setting throw by Coach Johnson. *Disclaimer: Though it says 69-06.5, the official result is 69-07.25.)

How much confidence does that give you to know that you've already broken the record in your opening meet this season?
I knew I could break it 'cause I was consistently throwing 68-69s so I knew I'd at least be close. I'm aiming to throw 74-75 by the end of the season.
What other meets are you targeting?
This weekend, I'm going to Gaucho Relays in Glendale. We're going for a big PR at Chandler Rotary and then of course State.
What meets you plan to compete in post-season?
I'm not sure still. I might compete at Great Southwest but I'd also like to have a fun summer and hang out with friends before I leave.

We wish Tyson the best of luck this season and beyond.