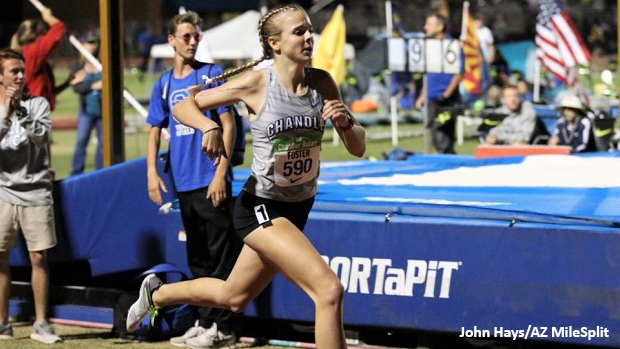 On June 8th, Morgan Foster (Chandler, 2019) played her hand against some of the best half-milers in the country. I knew I could throw down a fast time because I was having really good workouts. There were a few bumps along the way but my training has been very good," said Morgan.
To describe the adversities Morgan's faced this season as bumps in the road is a major understatement. While driving home to make curfew on New Year's Day, Morgan was involved in a rollover accident that left her with a concussion, partial amnesia, a collapsed lung, and a broken arm and put her in the hospital for six days. Upon returning to competition two months later, spectators could see the scar from her surgery down her right arm, a reminder of the work that it took for her to return to form.
Morgan ran her first open race of the season in front of a home crowd at the Chandler Rotary Invitational and took the victory in the Elite Girls 800m run with 2:14.67. At State, she won the open 800m run and anchored the Girls 4x800m to victory. She got the invitation to Brooks PR on May 19th and prepared for a tactical race with her Coach Matt Lincoln.
"The plan was to go out with the front pack but to let someone else take the lead for the first 600 then just bring it home strong," said Foster. Going into the race, Morgan's season best had only been 2:12.03 from the Division I State Championships.
After getting boxed in for the first 400m, Foster snuck into second place with 200 meters left, right behind Brooke Manson of Sammamish, WA. "With 200 to go, I was repeating 'this is about heart', because I had done the work and now it comes down to how badly I wanted that podium spot."
She was passed by Cathilyn McIntosh of Loomis, CA who won the race in 2:06.50 over Manson but Foster was able to hold on to third place with a season best time of 2:08.38, now ranked US #7. "I was happy to finally make the podium and considering the obstacles I've had this year, I am happier with my performance this year rather than last year."
Foster's not done with track for the summer. This week she will take on USATF Junior Nationals in Bloomington, IN.
Tweets by MileSplitAZ