All photos by Margot Kelly

Six years ago the Desert Twilight Invitational started with 5 races and 886 runners.  With the Twilight Movie theme and a love for running at night the meet became an instant hit and the word spread quickly.  The sixth annual Desert Twilight Invitational had over 4,000 runners crossing the finish line with teams from Coast to Coast attending.  The cool night air and the fast course of Toka Sticks gave way to some outstanding times and competition. 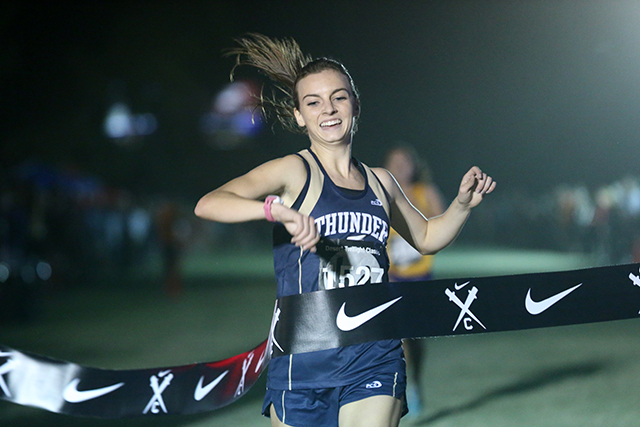 As the leaders in the race turned the corner into view of the finish line, it was Christen in the lead with Dani Jones on her heels but Christen's 10:27 two mile speed was no match to Jones's 2:10 800 speed and with less than 100 meters to go Jones made her move and crossed the finish line in a meet record time of 17:19.3.

"I wanted to get out a little faster than I did at Woodbridge," said Jones after the race. " I wanted to keep the front in site - and for awhile I was a little nervous.  First place is what I was definitely looking for."  Although Jones is undefeated in Arizona she has never won a meet of this magnitude.  "I have never broken tape before so that was awesome!"

"It was a really different experience than Woodbridge," said the younger Jones post race. "I got out a little better and I felt good the whole time.  It was nice to have her (Dani) in front of me to see Desert Vista!" 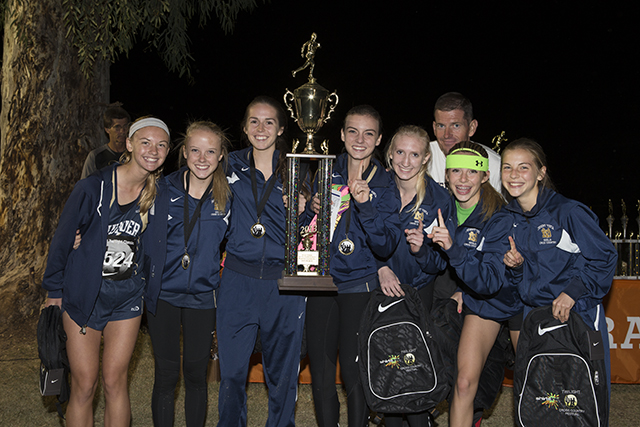 Desert Vista won the Team Title with 61 pts. over Xavier's 75 pts.  Both teams raced exceptionally well but this year Desert Vista had the edge by placing two runners in the top 3 followed by a 13th place (Nicole Hicks, SR), 22nd (Emily Smith, SO) and 23rd (Madi Bucci, FR).

When asked about her race Hicks stated, "I felt good about my performance.   Coach wanted us to just be smart on the front end and race hard on the back end and that's what we did."

DV's 4th runner Smith felt great after the race. "This is probably one of my best races I've had in my running career.  At the mile and 1/2 I started to move forward and pass girls."

Xavier has dominated the Twilight Invitational winning both the Team Title and the individual title since entering the meet in it's second year when the course was 3 miles.   As a senior Jessica Tonn won the sweepstakes race in 16:32.3 but the following year the course was lengthened to a 5K and Sarah Fakler won the next three years in 17:47.1, 17:30.9 and 17:34.28.


For the last two years the boys Sweepstakes team trophy went out of state with Los Alamos, NM winning in 2012 but the this year the defending champions were no match for Corona del Sol! 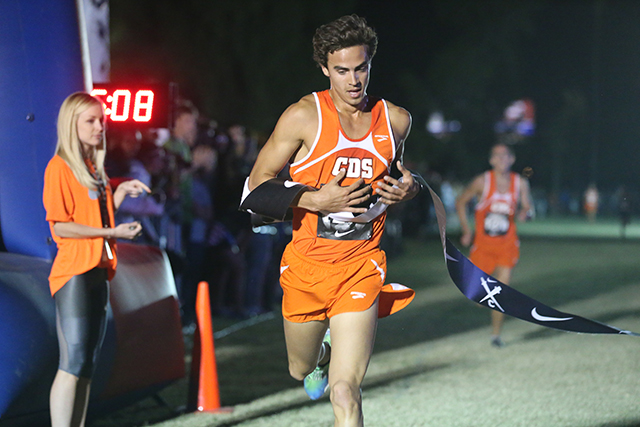 Rodriguez and Normand led a tight pack of runners (Dale, Wheeler, Masayesva, Schriener and Miller) at the 2 mile mark.   Redondo Union still held the lead with 140 pts but Corona del Sol was making a move into 2nd with 171 pts. followed by Tuba City (175 its), Page (177) and Lake Braddock (199). 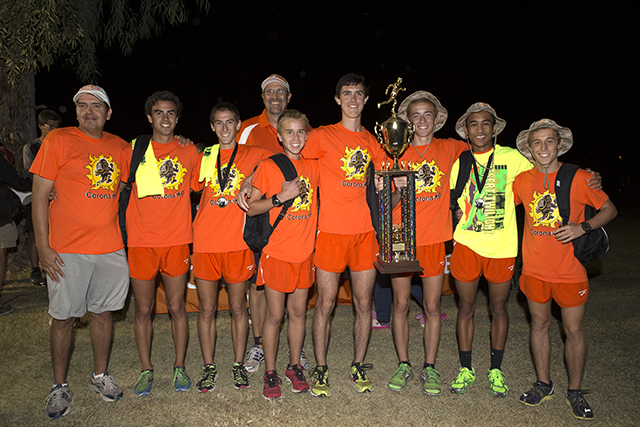 "Specifically for today we really focused on getting out and pushing the pace early as opposed to last week when we were very conservative," said Rodriguez about the team's win. "It was more about running a smarter race as oppose to a hard race which helped us get the victory then -  but that wasn't the case today.  I think today everybody took it out fast but worked together.  Pushing themselves individually helped move the pack along throughout the race and finish the way we did with a lot of PR's.  We really executed our race well.  I'm really proud of these guys and happy for the victory today and keeping up our streak to represent Arizona the way we did."

Normand was a little under the weather at the Doug Conley Invitational the week before but was in great form for Twilight. "I worked all week just resting," said Normand after the race.  He continued talking about the team's success,  "That's how we wanted it to play out."

Wheeler loved the course because, "It's really flat."

Blake Fischer was the 4th runner for Corona and had a different take on the team dynamics.  "We had an amazing team effort and of course these three guys (Rodriguez, Normand and Wheeler) are insane but our 4 - 10 are really interchangeable and hard working.  If one of us gets sick you better watch out because someone is going to step up!"

"Last week we came out and proved ourselves to the whole state what we're here to do," shared a very happy Patrick Cullings.  "But I think tonight was more about showing the Southwest we are here to race.  We all performed really well tonight and moved up a lot. We are really serious about this season."

For Andrew Truswell it was all about the team growth as a whole.  "I'm just really glad with how we all did at this meet and how we all ran PR's."

"I thought the team, as a whole, did really well," said Slade Summers after the race.  "We placed awesome individually too.  We had our top 3 in the top 5!"

Corona and Desert Vista will go head to head at the State Meet on November 9th where Desert Vista will try to defend their 2012 State Title.  Corona will be going for their first win since 1992 when Nate Rodriguez's Dad (Ari) was a top runner for the school.