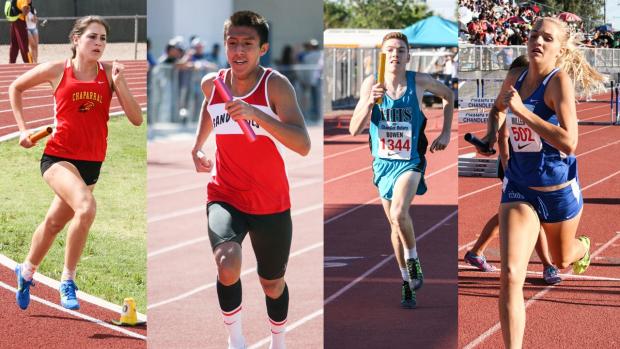 Simply stated, the 4x800 is a different beast than the 800 on multiple fronts. Those fronts would include:

1. Even at the highest-tier meets, the 4x800 tends to string out much more than the 800. As a result, issues of boxing and bumping tend to be much reduced from the open 800.

2. Few teams have a deep enough well of true 800 types to fill their legs with runners who view the 800 as their primary event. Consequently, there's a lot of borrowing from other events that goes on with the 4x800. This introduces an almost endless series of variables into your 4x800 strategy.

3. Almost no team in the state runs their strongest 4x800 every week of the season. It is therefore usually tough to get the best competition for your own 4x800. And it is also tough to know how your own team measures up against other teams heading into state. Perhaps more than any other event in the state track meet, you line your team up and hope for the best.

One of the first issues that coaches concern themselves with is loading the four legs of the relay. Do you want your fastest guy/girl on the first leg, last leg, or one of the legs in between?

Conventional wisdom tends to put the fastest runner on either the first or last leg. Almost nobody puts that individual on the second or third leg, but those that do generally have some case-specific reason for doing so. Case specific reasons tend not to lend themselves to generalizations, so we'll not concern ourselves with those reasons in this article.

But, there are also reasons to put your fastest runner in the lead-off position. If you have the lead at the end of the first leg, several advantages accrue to your account. One, you have the best opportunity at a clean exchange. A clean exchange avoids the lost time due to congestion at the exchange zone (see the cover photo for this article and take a guess at how many teams were wishing at that very moment that their first leg had been just a little faster). Closely related to this is the advantage of not having to move out to lane three or four to make your exchange. A more direct line means less distance and therefore less time.

The biggest advantage of being the first team to the first (or any other) exchange, however, may have nothing to do with the exchange zone itself. The greater advantage may lie in how the legs of the opposing teams chase after your runner leading the next leg.

Frankly, most 4x800 runners--and especially those without a lot of 800 meter experience--tend to chase too hard on the first lap. The 800 meters is a grueling, nasty two-lap event. If you spend too hard on the first lap, the payback is most assuredly coming on the second lap. Yet, way too many 4x800 legs cannot resist the urge to close up too quickly on the individual running in front of them. Once they close up on the individual they were targeting, they have little left to continue the race.

For most 800 runners, the best position to be in to properly pace your first lap is the lead. It's easier to maintain proper pacing when holding a lead (and especially so if you can "feel" the presence of runners behind you) than when trying to bridge up to the lead. Owning the lead also means owning inside position on the turns. And, a smart leader will bait the following runners just a little, allowing them to come up on his/her outside shoulder and then dropping a surge to take advantage of their fatigued state.

Properly executed, this tactic typically results in an accordion effect between the first and second place runners. Second will come up, or squeeze, on the first runner. The first runner will then pull away--assuming that the first runner is a decent match for the ability of the second runner.

Owing to the traffic likely to be encountered and the breakline component of the opening leg, you want your first leg to be an experienced 800 meter runner. The only places to get the kind of experience needed to lead off your 4x800 are on the first leg of the 4x800 or the open 800. Any place else, and you're wasting your prep time with that individual. Of the two, the open 800 is a better place than the opening leg of the 4x800 to get the needed experience. You can more reliably count on traffic issues in the 800 than on the opening leg of the 4x800. The traffic issues, of course, are nowhere of greater concern than they are at the breakline (see the Track Fan's Guide to the 800 Meters article).

Since most teams don't have a full set of four highly competitive pure 800 types, it behooves a coach to think about where one or two or three other legs might come from. Most well-conditioned 400s can extend to 800 meters. They may not want to, but most have the ability. Probably the first thing you want to teach a 400 runner moving up to the 4x800 is how to pace the first lap of an 800. As in so many other pursuits, experience is a great teacher.

1600s and 3200s tend to have a little difficulty in learning to go out at 800 meter pace. The bread and butter of their game is going out conservatively and attacking later. You can't go out at 1600 or 3200 pace and expect to be in any kind of position to attack later in an 800. Proper 800 pacing can be learned, but it begins as something outside of the comfort zone of almost all 1600 and 3200 types.

The best resolution to this problem is to make sure your 16s and 32s get some 800 race experience during the season. They need to learn to feel confident about 800-meter pacing if they're to become strong 4x800 legs. And, that little bit of extra speed work tends to eventually pay dividends at longer distances as well.

300 hurdlers may be the easiest to convert to 4x800 legs. 300 hurdlers instinctively know the fast-but-not-quite-all-out-fast first lap pace of an 800. Some are easily convinced to run the 4x800, and others are not so easily convinced. Life is like that.

Running a highly competitive 4x800 puts an enormous load on the legs of four individuals. Whether at the state meet or at an invitational, the 4x800 comes early in the event and you must weigh the consequences of putting that kind of load on the legs of those four individuals that early in the event. They will feel that load the rest of the event. Running a 4x800 is not a great decision in every setting. There are plenty of times when discretion indicates passing by running your best 4x800.

As a consequence, teams often run fully-loaded 4x800s only two or three times during the invitational season--just enough to get the team a little experience working together and to nail down a decent state-qualifying time.

Many invitational 4x800s are experimental in nature, with coaches casting about for people who may possess a heretofore undiscovered knack for running the 800. A 4x800 that neither places nor runs a state qualifying time still might reveal the identity of someone who can take a spot on your state 4x800 team.

Due to the duration of the relay legs, few teams spend much time working on 4x800 exchanges. File that fact away, and then watch a few 4x800s to get a sense how many times a reversal of order takes places within the exchange zone. Exchanges may not be as important in the 4x800 as they are in the 4x100, but they are no trivial matter.

Ask yourself this: If you're going to put an 800 meter kind of load on the legs of four of your athletes, do you really want to lose a second fumbling around in the exchange zone? The cost of running the 4x800 is great enough that you can't afford to be foolish with the details. And, many coaches try to find ways to keep those who struggle with the concept of passing a baton out of their second and third legs (this isn't always possible, of course).

The discerning observer of 4x800s has learned that 4x800 times tend to drop more consistently throughout the season than the times for most events. Learning to run an 800 well takes time--for almost any individual. Four people learning to run an 800 takes even more time. Unless a team unloads its 4x800 at state or has lost a key runner or two to injury, the state 4x800 is almost always ends up as the fastest effort for that team over the entire season. Consequently, it's an exciting state race for almost every team on the track.