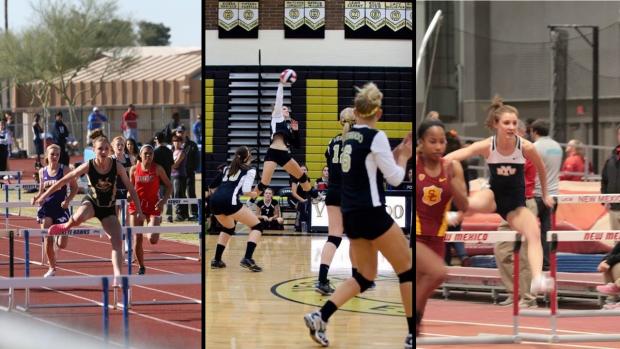 Right to Left: Andee Shelton competes in the 100H at Verrado High School, for the Viper volleyball team and for the BYU Cougars at the New Mexico Invitational. Photos by Troy Shelton.

For guys, the most popular fall sport is probably football. For girls, it is arguably volleyball. At least in terms of participation rate, volleyball ranks among the highest in the nation for high school girls athletics. Like track helped Devon Allen with football, so too track helped Andee Shelton with volleyball. In fact, she ended up loving track so much she went out for the team in college. Before earning a NCAA Division 1 track scholarship, Andee's abilities on the rubber oval helped her become Verrado's team MVP in volleyball, leading her team in middle blocks. In track Andee was a top tier hurdler for the Vipers, finishing top three in state for both the 100H and 300H events. Andee's track skills were contributory in cementing her place as a very competitive outside hitter in the west valley. So to all you volleyball players out there, before you rush off and play club volleyball this spring, consider joining your high schools track team. Here are dozen reasons why you should:

12. Jump higher. Spaghetti legs might feel miserable after track practice but they will help you jump higher to get a block at the net against that girl whose is a few inches taller than you next fall.

11. Get a tan. Going to track meets is about the best way to get a tan since they last all day and are in the spring, which means lots of sunshine in Arizona. With summer around the corner, who wants to be in a gym when you could be outside getting tan?

10. Arm strength. One might not attribute ripped arms to track, but it takes more arm strength than you think to sprint a 400m. Good track coaches like to get you in the weight room as well. So while you might not suspect it initially, being on the track team might make your hit that much harder to defend.

9. There is one track team. Unlike in volleyball where there are different coaches for each level (C, JV and Varsity) with separate or at least divided practices, in track you get to do things as an entire team. You get the opportunity to get to know some upperclassmen and learn from the varsity coaches, even as a freshman.

8. Practices are shorter. Unlike volleyball where you can practice for hours on end, the best course of action after a hard workout is rest (shh….we will tell them about the ice baths later).

7. Price. Maybe this is more exciting for your parents, but the gear is cheaper, a lot cheaper. The club costs are virtually non-existent and since it only lasts one season.

6. Get better 5th set endurance. People who drive by a track practice might think some of the drills make people look like they are emulating dufflepud movements, but those drills will help build strength to stay on ones toes and react late in the fifth set when everyone else is dragging

4. You will get faster. Running faster across the court will help you make that next great dig when bump heads the wrong direction. Track coaches have a knack for making you a little, or maybe a lot, faster. 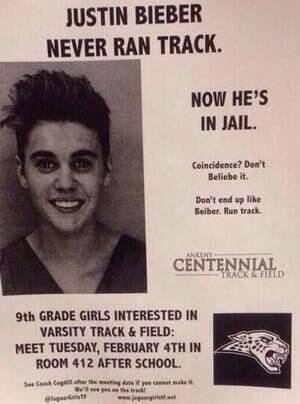 3. Save your high school some embarrassment. Literally every single volleyball match I have been to since moving to Arizona I have heard a Justin Bieber song played. Every last one. Maybe I should frequent more matches, but my ear drums prevent me from wanting to go back. In light of that fact though I thought I'd bring back a poster that was circulating the internet last year. You don't want your high school track coach to have to hang recruiting posters like this around your school, you just don't.

2. It's a co-ed sport. Like it or not, we all know all girls sports tend to have a lot of drama. The wonderful thing about track is that it is not an all-girls sport, so there is less drama. Who knows maybe you can convince that cute guy to come out for track too!

1. You will make friends. Winning, scholarships and medals put aside, at the end of the day you are going to make some life long friends. I still stay in touch with the people I ran track with in high school and I have been graduated almost a decade now. When you suffer with someone for a common cause, a special bond is formed. This is true among teammates and rivals alike. Go out and you will get to meet some really cool people, probably from a few other schools as well.