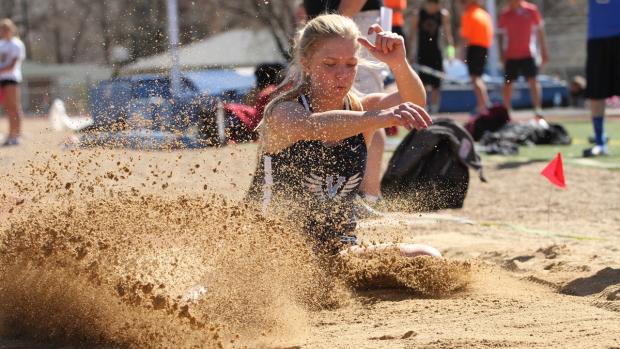 Field events have deep roots in the history of Olympics and the history of measuring human capability. Seemingly, they come from the practical skills of warriors from ancient times. Throwing javelin was used in battle. The pole vault was a means for scouts to cross deep rivers. Hammer throw was used to deliver important parcels across… okay, maybe I'm making this up a little bit, but really, the field events are good measures of raw human effort and for me (though I might be biased here) there is no more practical event than the long jump.

Think of all the movies you've seen where the hero of the film has to cross a gap using only his legs, a gut feeling, and courage. One of the most harrowing parts of “Cliff Hanger" was when Stallone has to jump over a large mountain crevass and subsequently grab onto the side of a cliff to avoid, well, I don't remember what, but (dang!) he had to bust out some long jump skills to do it!

Okay, so in track we've got a nice rubbery surface, spikes and a comfortable (most of the time) sand pit to land in, but armed with some expert fan knowledge, and if you imagine the athletes jumping over a pond full of crocodiles, it adds even more excitement to the event!

Typically in a meet there are multiple “flights" of long jumpers competing at a time. Each flight usually consists of 8-12 jumpers and each jumper gets 3 jumps in their flight. After all of the flights, the top 9 jumpers are determined and they get an additional 3 jumps in the finals flight. The number of jumpers in a flight is important for the athletes: two few jumpers means not enough recovery between jumps, and too many jumpers means too much time between jumps, in which case your body's nervous system can begin to relax and the athlete loses their explosiveness.

The rules of long jump are simple. As an athlete, when the official calls your name you have a set amount of time (typically 90 seconds) to jump. You run down the runway, jump of the board, and land in the pit. The board itself is how the official will tell if you made a legal jump. Sometimes it is just a painted white strip on the runway, and sometimes it is an actual wooden board you jump off of (this is what they use in the Olympics and other big meets.) You are allowed to jump off of the board, but if any part of your shoe goes over it's a scratch (aka foul) and an illegal jump. Make a legal jump, and they'll bust out the tape measure to see how far you went. They measure from the very end edge of the board to the nearest part *any part of your body* touches the sand. So when you land, don't put your hand back! You can lose a lot of distance off your jump from doing that!

After all the flights have completed, the officials note the best jump for each athlete and find the athletes who had the 9 farthest jumps. Ties are broken by looking at second best jumps, or even third best jumps, to determine placement. Even though an athlete's top mark is the most important, it is also important for them to do their best on every jump in the case of a tie. Once the top 9 athletes are determined, the officials reseed the finals. This means they order the finals flight from the 9th farthest jumper to the top jumper, which means the top athletes get to jump last. After all the athletes in the finals have jumped, the placement for the entire event is determined by the best jump for each athlete. The best jump can be from either the preliminary flights or finals.

Long jump is an explosive event. Good long jumpers typically have a sprinter's background and toolset, and train for strength and quick, explosive speed. Unlike the 100m or even the 60m dashes, the long jump approach is not meant to be a sustained sprint. In fact, jumpers only want to be hitting their top speed at the very end of their approach. Holding a top speed for much longer than a few strides will only waste energy the jumper needs to transfer into their takeoff. A typical approach will start out with a big strong pushing phase, leading into a tall postured, acceleration phase, leading into the penultimate step and take off step. The penultimate step is just as crucial as the final take off, as it is the opportunity for the jumper to setup a big takeoff. You'll see good long jumpers dip their hips slightly in the penultimate step so that on their take off they are already rising up.

When the jumper takes off, they drive their opposite knee up and begin the flight. They will want to have a tall and good posture as they takeoff because over or under rotating in the air will take away from how far they can go. When they are in the air, there are various techniques people use, but ultimately they will pick whichever they are most comfortable with. These include techniques like “the hanging C" where the athlete reaches up and arches their back making a C-shape with their body, or perhaps “the hitch kick" in which it looks like they are running through the air. When it comes time to land though, everyone has to do their best to hold their legs up with their core strength and delay landing into the sand for as long as possible. Once the jumper's feet hit the sand, they must prevent their body from all falling down and collapse their legs and but into the same area where their feet landed. You'd be amazed at how much distance a jumper can get out of a good landing!

Getting a jumper pumped and excited with the support from the fans can do big things for an athlete. Combined with their training and preparation, knowing that they have people their to watch them go into beast mode and jump big can really help them run fast and jump far. In collegiate meets, teammates will usually give their jumpers shout outs to let them know they're there for them and ready to see them do big things! So let you're son, daughter, friend, or whoever you are a fan of know you're support by cheering them on as they get ready to jump. Once they start going though, it is best to let them focus on what they need to do on the runway and in their take off. An exception to this is when the crowd gets a slow clap going for the athlete. The slow clap is a fun way for the crowd to get involved with any of the jumping events (long, triple, and high jump) and can definitely help pump up the athlete. Sometimes a team will know to get the slow clap going for their athlete, and sometimes the athlete will get the slow clap started themselves. Just like sounds, the slow clap is where everyone claps in unison, and as the jumper barrels down the runway, everyone starts clapping faster until it becomes a wall and rush of clapping as the athlete takes off. There's nothing like watching an athlete go big when the whole crowd is into the jump!

If you can find a spot close to the pit to watch the long jump, it is pretty incredible to see how high and how far the good jumpers go. Also, check out some of the world's top performers on YouTube. There have been incredible feats of human strength and speed displayed in the long jump event. For such a quick and explosive event, you can witness some pretty spectacular things! Enjoy watching!

Ian Storz is a Colorado School of Mines graduate (2008) and an All American in Track in Field. Ian was recruited for the decathlon, but during his track career at Mines he narrowed his focus to the 60/110m hurdles, long jump, and high jump. In his final season with the team, he qualified for nationals in the long jump at the last chance meet for the outdoor season. His performance at nationals earned him a 7th place finish and All American honors. Ian is currently an independent software contractor, but he has also continued to long jump and train with the Colorado School of Mines team for the past 2 seasons. Although it's been nearly seven years since his performance at nationals, he is jumping near is personal best and is looking to train for USA indoor nationals next season.