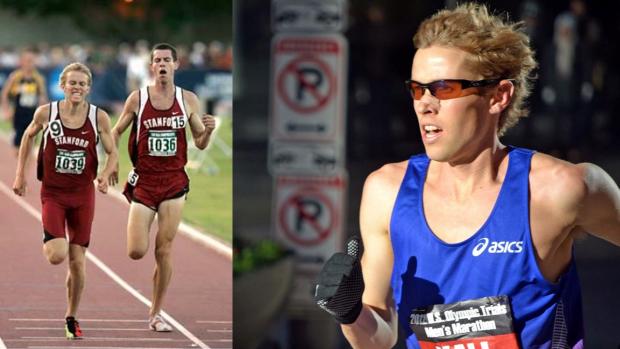 Ryan Hall and Ian Dobson sprint to the finish while racing at Stanford (L) Ryan Hall races through Central Park en route to an Olymic berth in the 2008 trials (R) Contributed Photos.

Ryan Hall is a household name in the distance running world. Having competed at the highest level, he has represented the United States twice in the marathon at the Olympics. Ryan has also recorded the fastest time ever by an American marathoner (2:04:58). However one might argue Ryan's best performance was his American record half marathon (59:43), which made him the first American ever to dip under the one hour mark. He did not start out dreaming of success at the longer distances though. In fact, it wasn't until after college he even tried the longer stuff. During Ryan's high school years he wanted to be a miler like the famous Jim Ryun. He and his high school classmates, Alan Webb and Dathan Ritzenhein, all recorded blazing fast mile times in high school. Dathan's and Ryan's calling were at longer distances though. At Stanford Ryan was moved up to the 5000m where he won the 2005 NCAA title in an epic battle with teammate Ian Dobson. He was the runner up in the 2003 NCAA cross country championships, losing a duel against Ritzenhein. In addition to running Ryan and his wife Sara run the Steps Foundation. Ryan Hall, a Flagstaff resident, graciously took some time to sit down with Arizona Milesplit to share what he learned from competing with his rivals like Ian, Dathan, and Alan.

Milesplit Arizona: Tell us a little about your rivalry at Stanford with Ian Dobson, was it friendly or competitive? How did your encourage/motivate each other to do better?

Ryan Hall: I never considered it a rivalry to be honest. I always saw Ian as my teammate. It was us against everyone else. Not me versus him. It took me a couple of years to learn to work together in practice because I was insecure but once I was comfortable with my abilities I was easier to work with. I didn't have to prove myself in workouts once I was secure with who I was!

AZ MS: How were you and Ian Dobson able to help each other in college during training?

Ryan: I think we can both say we wouldn't have went 1-2 at NCAA 5,000m if we didn't work out together or have each other in the race itself. At that time, believe it or not, I was better on the track doing shorter intervals so I'd push Ian along on those workouts then on the longer tempos or threshold workouts he would push me along. One of my favorite memories of racing with Ian was at Mt Sac relays in the 5,000m during our senior year. I was coming off a really bad indoor season but Ian and I had been working out together a lot and I knew if I could workout with him then I could race with him. So part way into the race when things were getting hard and I wasn't feeling very confident I remember thinking, "just like practice...just stay with Ian." His presence in races and workouts really helped me relax and I defiantly piggy backed off his momentum and confidence in my senior track season. I can safely say I wouldn't have had a breakthrough track season if it weren't for Ian, and maybe would have never been good enough to sign a contract as a professional athlete.

AZ MS: You and Ian certainly traded winning race, shoot I remember watching you two try and chase down Tim Broe in 2005. How did having a teammate in there help you race better? How did you work together to put away the competition in the 2005 NCAA 5K final?

Ryan: Yeah we had some good ones. There were races when I'd be feeling great and be the one leading the charge and then sometimes it would be him. At NCAAs for it was one of those races when everything went perfectly according to the plan Coach Gerard set for us. It was a special day for the three of us. It was all three of our dream to go 1-2. I can't credit Coach Gerard enough. At NCAAs we had a very set plan to try and get away from the deadly finish of Robert Cheseret. I had lost a close sprint with him at regionals and he pretty much demolished our entire distance crew at Pac 10s (he won the 1500,5000 and 10000). He was unbeatable if he was close. So we worked out a plan with the Tegenkamp, Solinsky to swap laps and try and run Robert off his feet. Lucky for us Galen tired him out previously in the 10k so we were able to pull it out. Nick Willis was also in the race so no one wanted him close at the bell either. Once Ian and I were free and clear (about 3/4s of the way into the race) it was really surreal that we were going to pull it off. It wasn't until 100m to go that I thought to myself that we still had to sort out the order. But really, I didn't really care that much who won or who was second. Mission accomplished was my only thought.

AZ MS: How were you able to be a good teammate to Ian when he had a good race? How did he return the favor?

Ryan: I guess the biggest way was if one of us had an off day we knew what we are capable by watching what the other guy could do.

AZ MS: Can you briefly summarize your virtual rivalry with Alan Webb and Dathan Ritzenhein? How did that make you a better runner?

Ryan: Yeah, we had a pretty amazing class. I guess it just kept me from settling. I'd be feeling pretty good about my times in the mile or two mile and then I'd see Alan or Dathan pop something big and then all the sudden my times ceased to impress myself and I'd work harder to run faster.

AZ MS: What would you tell 18 year old Ryan about maintaining friendly rivalries?

Ryan: Save it for the races. Don't compete in training. Save the big efforts for the races. Also, don't take rivalries so seriously. We are all in this together with the goal of using the standard of excellence for everyone

Last time we heard Ian Dobson's side of the story, click below to here what he had to say about competing with Ryan Hall at Stanford.