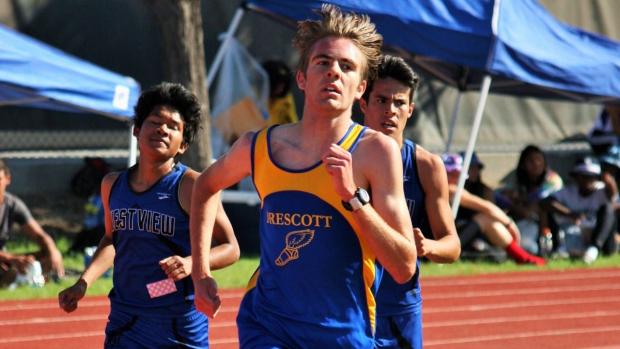 Simon Paige of Prescott lost the fastest 3200m time in the state, but gained that distinction in the 800m. Arizona Milesplit Photo.

The Scottsdale Distance Classic was held last night. As the name suggest the meet did not include spring, hurdle and field events. That, however, did not make it any less exciting.

The highlight performance of the evening was Carlos Villarreal's 8:59 3200m. Not only was this a PR and meet record, it was the 5th fastest time in the country this year! Not bad for someone who purports to prefer the mile. Teammates Oscar Amaya was second place though almost a minute back. Running such a performance solo speaks volumes about the discipline and ability the Rio Rico harrier has. Another talented runner, and whose time he displaced at the top of the state 3200 leader board is Simon Paige of Prescott. Don't feel too bad for Simon as his time in the 800m put him at the top of that list, at least for the time being. 800m times tend to fall like a rock the last few weeks of the season. This should be good news for Division 2 Maryvale HS who won the 4x800 with a time of 8:17. In the 1600 defending state champ Tyler Beauchamp secured the win over Division 2 cross country champion Nathan Thomas.

The girl's side of the meet, while not national top 10 times were set was equally as exciting. Just like Carlos in the boys 3200m, Allie Schadler torched the girls 800m field. . Also like Carlos, Allie was running in an off event. Coach Steve Schadler must be doing a thing or two right if his runners can work over fields like Allie and Carlos did last night. Allie's time of 2:14 bested Fountain Hills Sierra Jarriel by almost 8 seconds Sierra Jarriel also finished in the second position in the 1600 to Megan Reniewicki of Arcadia. The small school divisions were well represented in the 1600m though. Division 3 star Riona Nicholson secured a 4th place finish while division 4 cross country champion Maya Smith came in 5th. In the girls 3200m Colorado State bound Ali Kallner cruised to a 18 second victory over Sandra Day O'Conner freshman Jesselyn Bries. Adding some geographic variety to the podium, Courtney Lewis (Flagstaff), Hannah Whetzel (Catalina Foothills) and Yarithza Soto (Maryvale) rounded out the top 5.

Results from this meet and previous meets can be found on az.milesplit.com, each athletes also has their own profile. Claim your athlete profile and you will be able to see historic results. Shoot, if you want you can even edit your athlete profile to make it look spiffy.