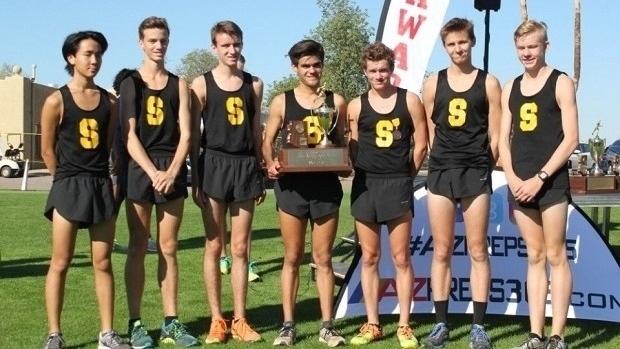 The Saguaro Sabercats have graduated Michael Barney, but return with a squad of now-matured and hungry upperclassmen. They'll be led by Mark Wogan (Sr.) who placed 13th in last year's D3 boys race of the State Meet. He finished his junior track season this past May with PRs in both the 1600m (4:38.67) and 3200m (9:51.21), placing 4th among D3 boys for 3200m. Adam Gilbreath (So.) also returns with a 5k PR of 16:44 and has run 10:14.29 for 3200m, while Jacob Hoppe (Sr.) and Matthew Kaya (Sr.) both improved their 5k times from sophomore to junior season by about a minute. This spring, Jacob qualified for State with a PR of 10:03.83 for 3200m, and finished 15th among D3 boys. The Sabercats placed 2nd in the D3 boys race at last year's XC State Meet, but return highly motivated to graduate as State Champions.
Coach Bailey Says…

Who are your top returners?
This year I have some great returners to my squad. We are bringing back Mark Wogan (12), Adam Gilbreath (11), Jacob Hoppe (12), and Matt Kaya (12). Mark finished 8th at State last year, Adam coming it at 20th and Jacob Hoppe finishing 40th. All four of them are coming of a really strong summer and they should look to have a great season this year.
Do you have any impact freshman or incoming transfers?
My impact freshman this year are Broc Berg and Ethan Rodriguez-Story. Both are quality runners with some great middle school experience under their belt. I am looking for Broc and Ethan to play a role during this season for the charge to state. Look for those two being high placers as freshman.
What meets are you keying in on this year?
Our key meets leading up to state are Peaks Invitational, Fountain Hills, and Doug Conley.
How has your preseason training been going?
We set some high expectations for our team this year, which will equate to a more focused and driven squad. As a new coach to Saguaro this year we had a bit of a break in period this summer. Once the bugs were worked out we showed some real spark in the summer.
Have you set any goals as a team?
I think that missing the State Championship by a few points has made them hungrier to go after the state title this year….and that is the goal this year…to win state! Our goal setting session this year was awesome. They really provided a clear path to how they want to attack the season. The ultimate goal being state, but really making themselves true students of the sport. They are a very fun group of runners that really enjoy the sport. Look for us out there this year having a good time and making an impact.
2017 Returner's Top Times
Tweets by MileSplitAZ