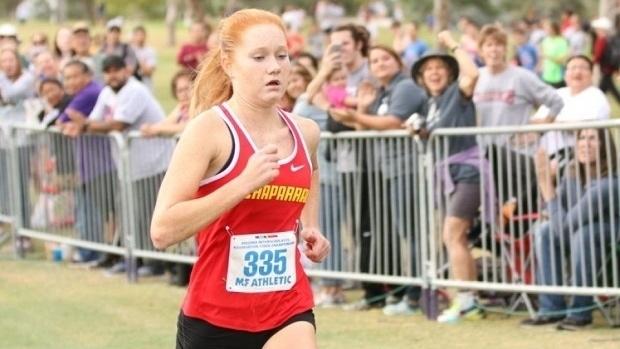 (Abi Archer was the first finisher of the State Meet on Saturday.-photo by John Hays)

The State Championships on Saturday, were everything we had hoped for and more! Division II gathered 30 teams to compete in the boys' race and 28 teams in the girls' race, with over 200 runners entered in each at Cave Creek Golf Course in north Phoenix. Juniors Abi Archer (Chaparral) and Rylan Stubbs (Campo Verde) were ranked 1st among DII Girls and Boys respectively, and Flagstaff were eager to mix it up with valley area squads like Chaparral and Campo Verde and defend their titles.
The Division 2 girls opened the day at Cave Creek, with Abi Archer storming the course in dominant fashion, continuously stretching her lead to clinch her second consecutive State Title, this time winning by well over a minute. Alaina Kautz (Campo Verde, Sr.) led the race for 2nd place, just ahead of North Canyon's Cassandra Ogburn (Jr.) and Stefana Purkovic (Jr.), Emily Stutesman (Deer Valley, Jr.), Samantha Deane (Verrado, Sr.), and Richelle Sandin (Catalina Foothills, Sr.). Though Sandin suffered a twisted ankle, she stuck it out for the Falcons, gradually working to overtake Kautz by 2 seconds for runner-up. Deer Valley's Emily Stutesman who hadn't run cross-country since her freshman season, finished 4th among Division 2 girls at Cave Creek Golf Course. 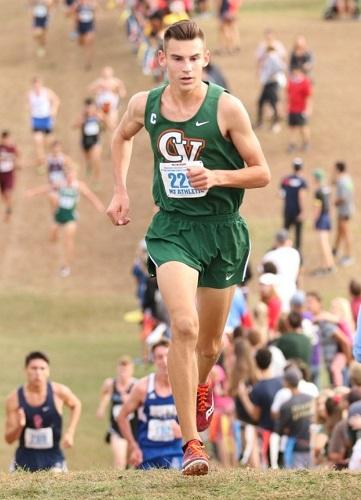 (Rylan Stubbs led the D2 Boys race from the front.-John Hays)
Then came the boys race, which Rylan Stubbs (Campo Verde, Jr.) also led from the front. At the hill, Josh Sieler (Buena, Sr.) and Daniel Avila (Centennial, Sr.) followed neck-and-neck only seconds behind Stubbs with Christian DeBoard (Gila Ridge, Sr.), Flynn Fuhrmann (Flagstaff, Sr.), and Daniel Marquez (Gila Ridge, Sr.) in tow. Stubbs extended his lead to win by 20 seconds and clocked in a time of 15:54.09. In a two second spread, DeBoard came through with the runner-up finish for the GR Hawks, while Cienega's superfrosh Ayden Schilb finished 3rd after clawing his way through the pack, and Avila took 4th for the Yotes in 16:16. 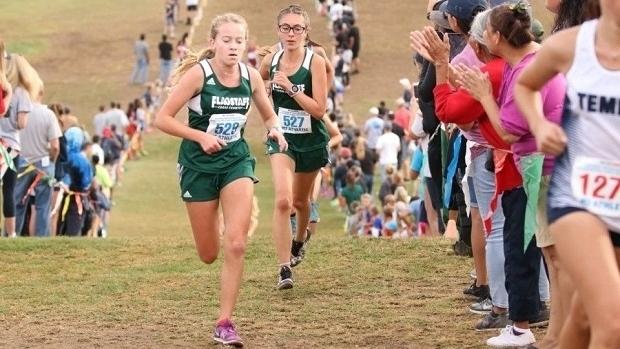 Holy moly. While the Flagstaff Eagles may not have been favored to win either team title, the Eagles rallied together first in the girls race with Maddy Christopher (Sr.) leading the charge for the defending champions just behind the chase pack. Super-sophomore Brianna White eventually caught up to her teammate finishing in 5th just a second ahead of Christopher in 6th place. Chloe Painter (Sr., 10th), Katrina Vollmer (Fr., 13th), and Povi Plank (Sr., 16th) all came through for Flagstaff, who collected a total of 49 points to clinch the Division II girls team title. Chaparral took 2nd with 80 points and North Canyon finished 3rd with 127.
The Flagstaff Boys had an arguably more difficult challenge as a team with squads like Campo Verde and Gila Ridge ready to give them a run for their money. The boys followed the girls example on Saturday morning, beginning with Flynn Fuhrman's 7th place finish. Though Wren Cooperrider (Sr.), Nate Milton (Jr.), Corey Blubaum (Sr.), and Peyton Sventek (Sr.) all placed between 27th to 42nd, it was enough to hold off Campo Verde. The Coyotes took the runner-up title once more with 146 points, and Deer Valley took a surprise third place finish with 172 points.
Check out Interviews from Division II below
Tweets by MileSplitAZ